AFP’s red-tagging a threat to freedom of expression – artists, directors 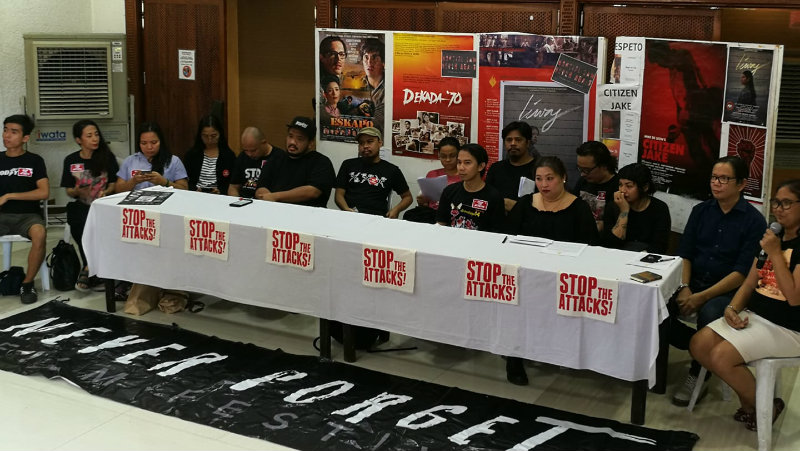 MANILA, Philippines – Groups of artists, directors, cultural workers, and academics cried foul over claims by the Philippine military that several Metro Manila schools had become “fora for communist recruitment” through film screenings about martial law and other nationalistic themes.

“This is red-baiting and slander of the worst kind,” read a statement by members of the film and artistic community, signed by over 300 individuals.

“It impinges on our right to freedom of expression, speech and assembly, and endangers us and our audience, especially in the context of the Duterte regime’s murderous anti-war and counter-insurgency campaigns and the President’s recent pronouncement that ‘rebels’ are now targets for ‘neutralization’ or can be arrested without warrant, despite constitutional guarantees against it,” the statement said.

In a separate statement, artist-activist group Dakila said: “DAKILA vehemently condemns this administration’s malicious and groundless red-tagging against students, educational institutions, and creative avenues like film screenings as part of the Duterte government’s orchestrated attack to condition the minds of the people for this looming dictatorship.”

“In the present political climate, this broad allegation of the AFP official dangerously sends a chilling message that not only affects the appreciation of political films, but also threatens the freedom of expression that all films strive for,” said the Directors Guild of the Philippines in another statement.

What did the military say? Armed Forces of the Philippines chief General Carlito Galvez Jr had claimed during a Senate budget hearing that the Communist Party of the Philippines has reportedly organized students in 10 universities in Manila. He did not name these supposed communism hotbeds, however.

Another military official, Brigadier General Antonio Parlade Jr, later named 18 universities while claiming that recruitment was being done through screenings of martial law films. The military then admitted that the list had not been fully verified.

What’s red-tagging? “Red-tagging” or “red-baiting,” according to the International Peace Observers Network, is when individuals or organizations critical of government are labelled “state enemies, communist terrorists, or members of communist front organizations.”

“The security forces still fail to differentiate between organizations that bear arms to fight the state and legitimate unarmed organizations that oppose the government within the framework of their guaranteed rights and freedoms,” it said.

This is dangerous because, as the groups point out, it makes it more difficult for people to voice out their thoughts, including any opposition to the government’s policies. – Rappler.com

Read the full statements of the organizations here:

DAKILA, the artist-activist group behind the Active Vista Human Rights Film Festival, condemns the “red-tagging” of the Duterte administration of schools, youth, artists and groups organizing Martial Law-themed film screenings. DAKILA, a group known to organize film screenings complemented with discussions on social messages of the films it screens in schools, communities, cinemas, and alternative spaces, reacted after the Armed Forces of the Philippines issued a statement implicating 17 schools as part of the alleged “Red October” plot of the Communist Party of the Philippines.

According to DAKILA OIC-Executive Director Rash Caritativo, “DAKILA vehemently condemns this administration’s malicious and groundless red-tagging against students, educational institutions, and creative avenues like film screenings as part of the Duterte government’s orchestrated attack to condition the minds of the people for this looming dictatorship.”

Caritativo further claims, “In a democracy, citizens have the right to criticize the government without fear of any repercussions or their safety and well-being. The lies and groundless allegations of the government clearly intend to justify its crackdown on activists, to tag legitimate protests as acts of terrorism, and to ultimately push its tyrannical advances. This clearly impinges on our right to freedom of expression, speech and assembly, and endangers all of us – as artists, as audiences, as students, as educators, as parents, and as citizens.”

DAKILA has been organizing human rights-themed film screenings and forums in schools nationwide since 2008. It has been presenting films tackling a wide array of human rights issues from gender and reproductive health rights to children’s rights and climate justice. In the past, it has conducted nationwide roadshows of historical films like Heneral Luna and Goyo: Ang Batang Heneral which encouraged discourse on issues on our Filipino identity, national struggle for freedom, and the concept of nationhood. Every year, DAKILA holds its Active Vista Human Rights Festival which showcases the best social advocacy films.

Active Vista Executive Director Leni Velasco, said, “Attacking venues for critical discourse and education like schools and film screenings through red-tagging puts the lives of innocent civilians, especially our youth and our artists, at risk and in danger. Its real intent is to keep our people ignorant and misinformed so those in power can continue to feed lies, deceit, and a narrative that perpetuates only their self-serving interests to conceal the truth of our current social conditions.”

Velasco added, “Formal education and alternative spaces of education have important roles to play in building our nation. It provides citizens with knowledge and information, and allows them to reflect and analyze, so that they can make informed decisions about their future and contribute to nation-building. By attacking learning institutions and artistic endeavors as a form of expression and reflection, what this government wants is to keep our people divided, sow fear, and silence voices of dissent. This ‘red-tagging’ is clearly the tool of tyrants who are scared of the growing people’s resistance against dictatorship.”

Active Vista has been screening Martial Law-themed films like Citizen Jake and Respeto in schools nationwide to spark discourse on current social issues, educate students on the perils of Martial Law, and encourage critical thinking among audiences. DAKILA is a non-partisan group promoting the movement for modern heroism especially among artists and the youth.

“In times of darkness, art and education shed light to social realities that surround us. They are our ultimate weapons to reflect on our social conditions and shape our genuine path to national development,” Velasco further added.

DAKILA together with other organizations, youth and cultural groups, and artists are set to hold a Human Rights Festival to commemorate the 70th anniversary of the United Nations Universal Declaration of Human Rights this December 10, 2018. The festival shall feature film screenings, performances, talks, exhibits, workshops, a youth summit, and a concert to show the united action of the people in the promotion, protection, and defense of Human Rights in the Philippines.

In ending, DAKILA’s Rash Caritativo said, “If this administration is willing to make such preposterous claims towards educational institutions, youth, educators, artists, and cultural workers, then they must also realize that they have only fueled the flames of resistance igniting in campuses and communities.”

“For every attack of this administration on our rights and freedoms, a thousand film screenings shall emerge in all spaces; artworks on social realities shall blossom; and discourse on social conditions shall flourish in schools, churches and communities, online and offline,“ she concluded.

DGPI BOARD OF DIRECTORS PUBLIC STATEMENT

On October 3, 2018, CNN Philippines reported that the Assistant Deputy Chief of Staff for Operations of the AFP, claimed “the Communist Party of the Philippines (CPP) is recruiting members in more than 10 universities in Manila through screenings of martial law films.”

As an organization that represents the concerns of directors of Philippine cinema, the Directors Guild of the Philippines, Inc. decries and strongly condemns the vilification of legitimate film screenings of political content in public and educational institutions.

In the present political climate, this broad allegation of the AFP official dangerously sends a chilling message that not only affects the appreciation of political films, but also threatens the freedom of expression that all films strive for.

Cinema is a crucial element of any healthy democracy. Not only does it entertain or promote cultural identity, it more necessarily functions as a mirror reflecting a society’s humanity, or inhumanity, to itself and this way contributes to genuine nation-building.

For this reason, it is in society’s interest to keep cinema and the other arts free.

Similarly, it is the mission of educational institutions to encourage students to find their own voices and make their own political choices to ensure their contribution to a healthy democratic society.

In these trying times, where truth is easily subverted, cinema plays an important role in assuring that freedom is protected. Let us remain vigilant to make certain that art is not silenced. We encourage schools to continue screenings of films that contribute to their education and lastly, we remind filmmakers, of ANY political spectrum to continue making films that matter to society.

The DGPI Board of Director

Statement from personalities in the arts and film industry

We, filmmakers, media workers, artists, cultural workers, academicians and other members of the film and artistic community, deplore the recent statements of the assistant deputy chief of staff for operations for the Armed Forces of the Philippines, Brig. Gen. Antonio Parlade Jr., who essentially accuses us and the organizations that sponsor film screenings on martial law of recruiting for the New People’s Army.

This is red-baiting and slander of the worst kind. It impinges on our right to freedom of expression, speech and assembly, and endangers us and our audience, especially in the context of the Duterte regime’s murderous anti-war and counter-insurgency campaigns and the President’s recent pronouncement that “rebels” are now targets for “neutralization” or can be arrested without warrant, despite constitutional guarantees against it.

Our film screenings provide an invaluable service to the youth, the students and the general audience, especially since our education system has largely failed in informing them about the systemic atrocities that happened during the martial law era. The screenings hope to provide them with knowledge and insight into that dark chapter in our history, especially since many of the actual perpetrators and beneficiaries of that fascist dictatorship have fully rehabilitated themselves back into mainstream politics and into positions of power.

The screenings help them understand the roots of fascism, and how our failure as a society to stamp out those roots have led to its resurgence. Our events have also become venues for discussion and dialogue, between us as artists and documentarians of reality and the youth and the people we wish to serve. On the whole, we have hoped to equip the audience with information and critical skills so that they themselves can adequately decide the course of action to take as responsible citizens of the country.

We wonder why the AFP slanders us. Have they now become active defenders of the Marcoses and the criminals behind martial law? Or do they merely wish that the youth and the people remain ignorant of their central role as an institution in the wholesale trampling of our democratic rights—then and now?

As the people are unlikely to believe such hysterical lies by the AFP, we urge them to continue to support the exhibition of films and other informational materials on martial law. Let us further spread the word. We will not be cowed by these threats even as we will continue to condemn and expose these threats. The screenings will go on – and multiply – in schools, in communities, in factories, in farms, in offices, in migrant gatherings. The truth telling will continue!