DOJ on Trillanes amnesty: Application form itself is defective 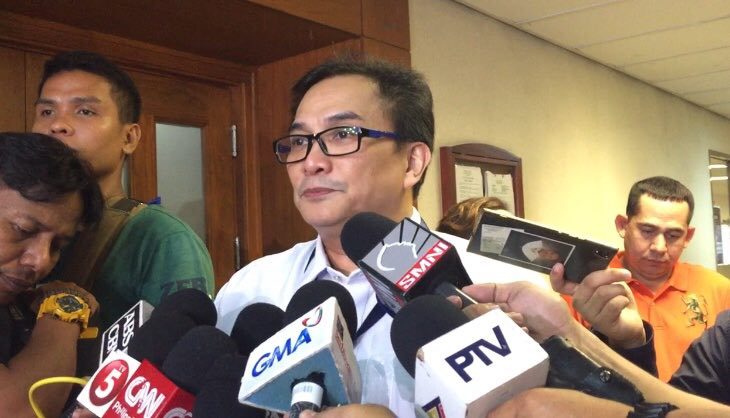 MANILA, Philippines (UPDATED) – To make its case for sending opposition Senator Antonio Trillanes IV back to jail, the Department of Justice (DOJ) introduced a new theory to the court on Friday, October 5: that the application form in itself is defective.

DOJ’s Acting Prosecutor General Richard Fadullon pointed out to the court that the application form’s section on the required admission of guilt mentioned only “incidents” but not specific crimes.

“Our opinion is that the form itself is defective, and it could have been corrected if they were able to show that there was really an admission,” Fadullon told reporters after the hearing.

Fadullon showed a sample copy of the amnesty application form during the hearing of Makati Regional Trial Court (RTC) Branch 148, and said that under the admission of guilt, applicants only had to tick the boxes for incidents such as the 2003 Oakwood Mutiny, 2006 Marine Standoff and 2007 Manila Peninsula Siege. (READ: [ANALYSIS] Philippine courts dribble, stall on Trillanes amnesty issue)

Fadullon stressed this point repeatedly, particularly with the members of the Department of National Defense (DND) ad hoc committee that was tasked to process the application forms for amnesty under former president Benigno Aquino III’s Proclamation No. 75.

“Granting without admitting that there was an application (by Trillanes), the next question and the more crucial point, did the accused admit guilt for the offenses which he was charged?” Fadullon said.

Trillanes’ lawyer Rey Robles said it is unjust to put at risk the liberty of the more than 250 individuals who were granted amnesty through Aquino’s Proclamation No. 75. The application form was created by the ad hoc committee.

(That’s unjust because those who applied, they applied in good faith, and they relied on the forms of the DND, and for the DOJ to say that their amnesties will be voided just because of that and they will be jailed with no bail, that is out of place.)

Earlier in the hearing, Fadullon presented to the court DND chief counsel Norman Daanoy who said that upon a search of their records this September, they couldn’t find minutes of the deliberations of the more than 250 amnesty applications.

Fadullon denied that this would put at risk the other amnesty grantees aside from Trillanes.

“Let’s be very clear, (President Rodrigo Duterte’s) Proclamation No. 572 pertains to Senator Trillanes only so I do not want to speculate as far as the application of others for amnesty,” Fadullon said.

Justice Secretary Menardo Guevarra had said that it is possible that the government would also review whether there are deficiencies in the amnesties of Trillanes’ fellow Magdalo mutineers.

“We cannot take away that risk that they’re found to be deficient or non-compliant with the requirements for amnesty. Then any other person who might have not complied may suffer the same situation as Senator Trillanes,” Guevarra said on September 26.

“It would be best to ask (Secretary Guevarra) so he could clarify,” Fadullon said.

Guevarra said on Saturday, October 6, that “it is up to the President what he wants to do with the grant of amnesty to other individuals,” but that “for now, the focus is on Senator Trillanes’ amnesty grant.”

On the witness stand, ad hoc amnesty committee chairman Honorio Azcueta said the form did not need to contain specific crimes because the mutineers were already charged in court.

Robles said the DOJ just cannot make a new appreciation of what a proper form is, especially that it’s been 7 years since the ad hoc committee – the duly authorized body – made that call.

Makati Branch 148 Judge Andres Soriano gave both camps until Wednesday, October 10, to submit all their written offer of evidence, after which the case will be submitted for resolution.

Soriano is handling the coup d’etat charges against Trillanes that stemmed from the 2003 Oakwood Mutiny.

“I know there are sensitive considerations, so this must be studied closely. I would like to study this a little more as I don’t want to force myself into a resolution,” Soriano said.

Branch 150 Judge Elmo Alameda had gone ahead to make a decision, which was to arrest Trillanes. But the arrest order came with a P200,000 bail because of a previous bail grant.

There would be no bail in Soriano’s court in the event that his decision is similar to Alameda’s. A different decision, on the other hand, would create a glaring clash. – Rappler.com