Arroyo: Be concerned about Duterte’s health ‘only if he says it’s serious’ 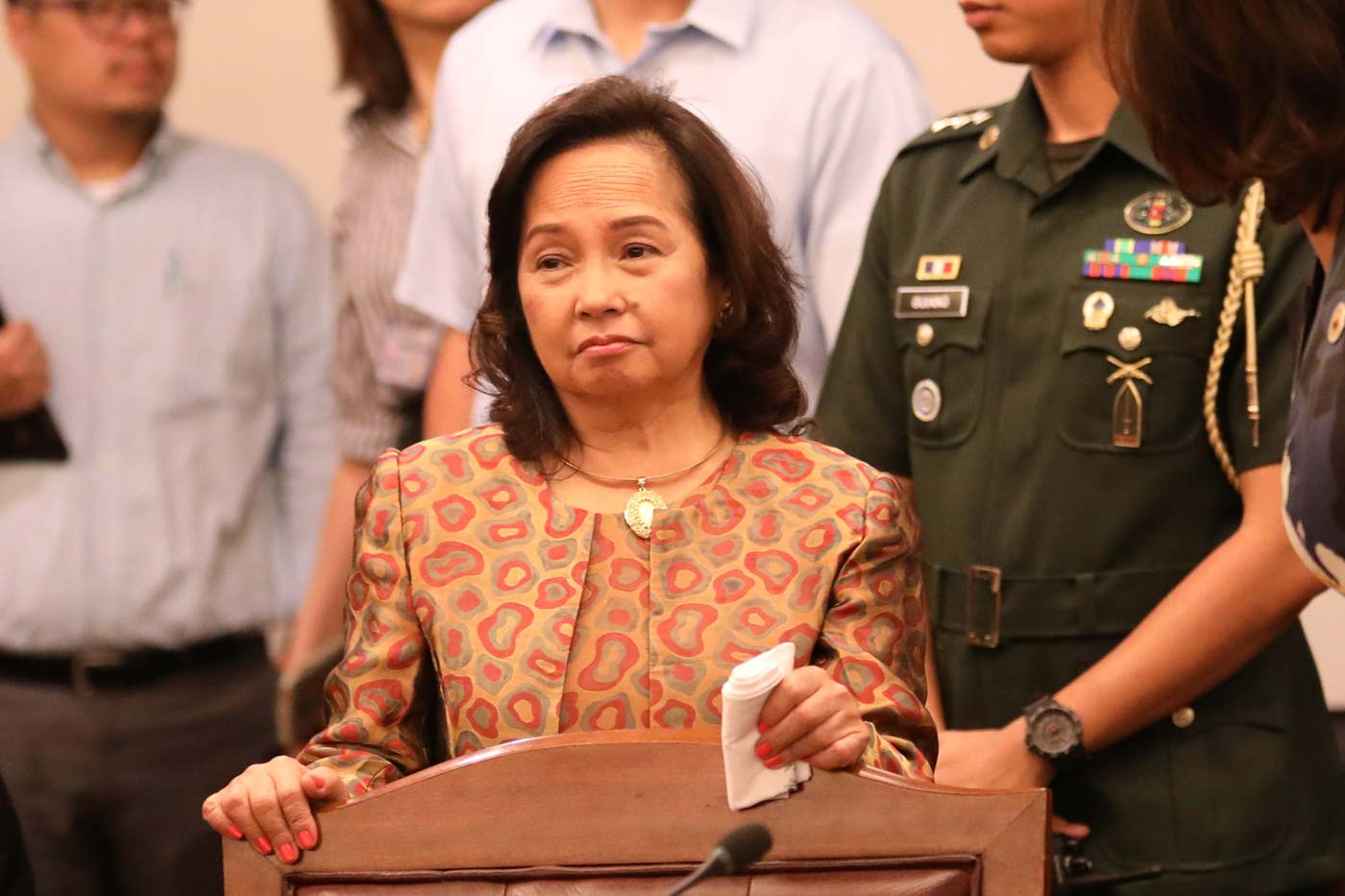 MANILA, Philippines – Speaker Gloria Macapagal Arroyo said the public should only be concerned about President Rodrigo Duterte’s state of health if he himself says there’s a cause for alarm.

The former president turned Pampanga 2nd District representative was asked on Monday, October 8 if Filipinos should be worried about the “growth” discovered after Duterte’s endoscopy.

Arroyo downplayed the issue, saying she had developed “growths” when she was president but they did not develop into cancer. Ms Arroyo served as president from 2001-2010.

“[It’s a cause for concern] only if he says it’s serious. Because I’ve always had lots of growths in my time. They were pre-cancerous polyps but they never ripened into cancer because timely removal was done with science and technology today,” said Arroyo.

Malacañang said Duterte’s doctors had found a “growth” during his endoscopy tests. The President said he would let the public know if he has cancer.

Just like administration-allied senators, Muntinlupa Representative Rufino Biazon said it is normal for politicians like Duterte to undergo executive check-ups, especially for his old age.

“Anyone at a certain age kailangan talaga magpatingin. I myself am approaching my half century mark. Nagpa-executive check-up, but that doesn’t mean I have a condition na unable to perform my duty. ‘Yong age ng ating Pangulo, he’s about 70 plus. So being in a very important role here in the country, importante rin talaga na nagpapatingin siya. In fact, dapat nga ‘yan annual,” said Biazon.

(Anyone at a certain need to get a check-up. I myself am approaching my half century mark. If I go on an executive check-up, that doesn’t mean I have a condition that would make me unable perform my duty. Our President’s age is at 70 plus. So because he’s playing a very important role in the country, it’s also important for him to get checked. In fact, that should be done annually.)

Section 12 reads: “In case of serious illness of the President, the public shall be informed of the state of his health. The members of the Cabinet in charge of national security and foreign relations and the Chief of Staff of the Armed Forces of the Philippines, shall not be denied access to the President during such illness.”

Asked what constitutes serious illness, Arroyo said it should be “life-threatening.”

Biazon added that based on Duterte’s recent public activities, he is still able to perform his job as President, which means he is currently not suffering from any life-threatening conditions.

(Obivously we can see the President still being able to do his daily activities. The layman’s understanding of a serious illness is perhaps when you’re already at the ICU.)

Why is it important to know Duterte’s health? For opposition lawmakers, however, disclosing details of the President’s health is a national security concern. (READ: 61% of Filipinos believe Duterte’s health a public matter – SWS)

“I have been calling the attention of Malacañang to publish the state of health of the President especially now that he admitted publicly that he is sick. This matter is of national security concern. The people must know if the President is still fit to discharge the duties of his office. Anything that he does or fails to do will affect the whole nation,” said Magdalo Representative Gary Alejano.

He said that Malacañang’s conflicting statements on Duterte’s health “reveal that they are indeed hiding the truth from the Filipino people.”

“The President’s health is a national concern not a private matter not to be revealed in public. Malacañang should treat this with high preference and utmost deference to the public’s right to information,” said Villarin.

“While we pray for the President’s immediate recovery and to be always in the pink of health, he owes it to all citizens to declare always his health condition,” he added. – Rappler.com