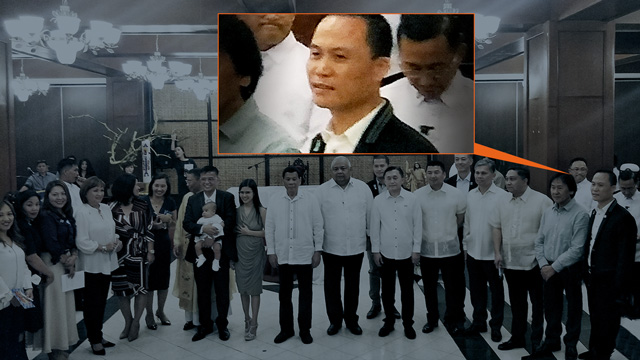 MANILA, Philippines – Chinese businessman Michael Yang enjoys the friendship not only of President Rodrigo Duterte, but of his former customs chief.

The photos were posted on the Philippine Full Win Group of Companies website. They accompanied a write-up of the event which sounded like Yang may also have stood in as godfather to Faeldon’s son.

Office of Civil Defense (OCD) Deputy Administrator for Operations Nicanor Faeldon and Atty Jelina Magsuci celebrated their first born child with the specially invited President Rodrigo Roa Duterte and Mr. Michael Yang not only stood as one of the godfathers but an inspiration for both him and his son to become the man he is now.

Duterte was one of the godfathers, along with Executive Secretary Salvador Medialdea, Special Assistant to the President Bong Go, Presidential Adviser for Sports Dennis Uy, and Office of Civil Defense (OCD) Administrator Ricardo Jalad.

The photos and write-up were posted on the site on April 19, or the day after the baptism, held at Camp Aguinaldo in Quezon City.

Rappler sought to clarify with Faeldon if Yang stood as godfather, but the OCD deputy administrator has yet to respond as of posting.

Faeldon had resigned as customs chief after a series of congressional hearings, where he was accused of involvement in the smuggling of P6.4 billion worth of shabu into the Philippines.

It had at the time been the worst case of drug smuggling under the administration of Duterte, who has sworn an unrelenting crackdown on the contraband.

The Department of Justice eventually cleared Faeldon of drug charges, citing “lack of probable cause.” Duterte reappointed Faeldon into his government, this time as OCD deputy administrator.

Duterte has denied appointing Yang as “Presidential Adviser on Economic Affairs,” saying this would be impossible as Yang is a Chinese citizen. 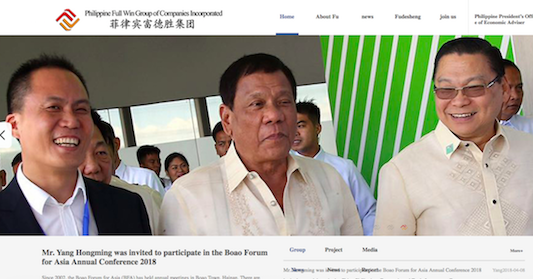 This is indicated by another write-up on the website, this time about Yang’s participation in the Philippines-China Trade and Investment Forum in Manila in February 2017.

“Mr Yang Hongming, Presidential Economic Adviser, was invited to attend the forum and exchanged talks with Philippine Ambassador Zhao Jianhua, Mr. Zhang Zongyan Vice president of China Railway Group and Mr. Wen Gang Vice president of China Construction and construction group. Mr. Yang Hongming the Economic Adviser of the President made fruitful talks and reached a lot of consensus to laid a solid foundation for the next mutually beneficial for both corporation,” reads the write-up.

At the top right of the website is a label that reads “Philippine President’s Office of Economic Adviser.”

The Chinese businessman was also on such friendly footing with the President that he was able to meet with him on Duterte’s birthday.

Photos on the website show Yang presenting Duterte with two birthday gifts: a work of Chinese calligraphy and a traditional Chinese painting.

“Mr Yang Hong Ming, the president’s Economic Advisor, was invited to Davao a day before the President Duterte’s birthday,” reads the write-up. 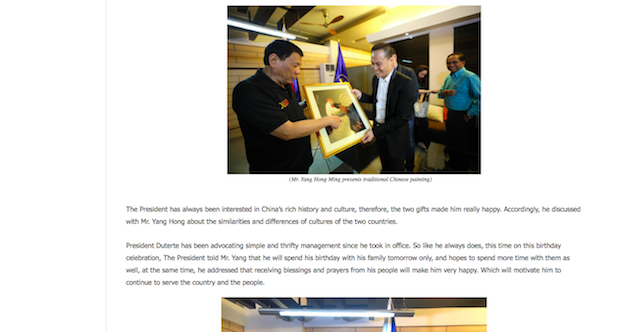 Duterte and Yang also supposedly spent the meeting talking about the similarities and differences between Chinese and Philippine culture.

Dutete’s ties with Yang had surfaced when the President publicly defended Yang from claims in a supposed “dossier” linking the businessman to illegal drugs.

The President claimed Yang was so close to Chinese Ambassador Zhao that the envoy would even spend nights in Yang’s home in Davao City. – Rappler.com