FAQ: All you need to know about Rappler IQ, Rappler’s Fact Check Project 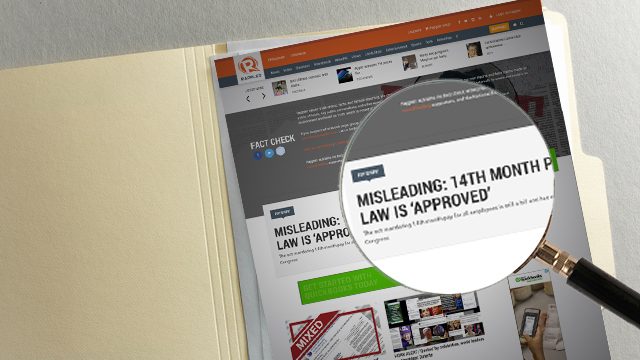 What is Rappler IQ?

Rappler IQ is a subsection in Newsbreak, the investigative and research unit of Rappler, that is devoted to publishing fast facts and fact-checking.

How did the fact-check initiative begin?

Rappler’s fact-check initiative is rooted in the multilevel process of verification we employ as investigative journalists to ensure that our reports are accurate.

Rappler’s brand of fact-checking sparked public conversations and voter discourse during the May 2016 national elections, when claims made by presidential and vice presidential candidates during live debates were subjected to live verification of facts and context by Rappler’s editors, reporters, and researchers.

We do the same to check claims during the President’s annual State of the Nation Address.

In October 2017, Rappler became a verified signatory to the fact checkers’ code of ethics of the International Fact-Checkers Network (IFCN) at Poynter.

Fact-checking by Rappler covers diverse topics such as politics, culture, and international relations. It does not only point out errors of fact or empirical information but also explains the context of the contested items in the news.

Our fact-checking appears prominently in three sections – “Fact Check,” “Fast Facts” and “Rappler IQ,” but may also be published in appropriate sections within the Rappler website (www.rappler.com).

Rappler’s work is aided by its database and archives initially built by Newsbreak, a magazine that published award-winning investigative pieces and long form for a decade until it merged with Rappler in 2012, and MovePH, which is the citizen journalism arm of Rappler.

Rappler values truth-telling, facts, and factual reporting. Fact-checking is done both internally and externally to create and sustain an environment anchored on truth, which is essential to a healthy and working democracy.

Rappler’s fact check methodology is explained in detail through this page: “How we fact-check.”

We use this set of questions as our guide in prioritizing what to fact-check:

Each claim is independently verified according to the methodology that uses publicly available documents, news reports, and primary source interviews.

As a partner in Facebook’s Third Party Fact Checker Program, we have aligned our ratings with ratings prescribed by the program with some modifications below:

As required by the program, Rappler produces explainers in relation to false ratings as well as misleading ratings. We generally do not publish fact check explainers with “True” ratings. From time to time, we also produce “fast facts” whenever we find that content may benefit from additional contextual information.

Notwithstanding the scope of Facebook’s Fact Check program, Rappler reserves the right to fact-check content described as “Satire” as well as some “Opinion” pieces whenever we see flagrant disregard of facts and when public comments indicate that people have been deceived by claims within said content.

We find and/or receive dubious online claims to fact-check through the following channels:

We also fact-check the public statements by key public officials and influential personalities, as well as reports by other news organizations.

What happens to content tagged by Rappler and other Facebook 3rd Party Partners fact checkers as false or mixed?

If the content is rated as “false,” Facebook will significantly lower the distribution on the platform’s News Feed, share a warning to users before they post the rated link, and notify users who previously shared the link about the rating.

If the content is rated as “mixed” or “misleading,” it may have less distribution, and Facebook will have the same warning and notification given to users.

Content rated by Rappler as false or misleading but are out of scope as far as Facebook’s fact check guidelines are concerned are not rated in Facebook’s dashboard.

Can ratings for specific content be updated or disputed?

Yes, consistent with the rules of the Third Party Fact Check Program, Rappler responds to requests from publishers if they have already corrected the rated content or if they believe that our rating is inaccurate.

Publishers should send disputes and corrections in relation to content that we fact-checked to factcheck@rappler.com.

To issue a correction, the publisher must correct the false content and/or headline and clearly state in the story that a correction has been made.

Complaints about possible violations to the IFCN Code of Principles can be coursed through the IFCN.

Do we fact-check only the administration?

This is an absurd question normally thrown in by partisan groups. Rappler fact-checks claims that require fact-checking, based on our prioritization guide. This includes claims by those critical as well as supportive of the incumbent administration or any sector for that matter.

Beyond this, we also fact-check claims that are not related to politics, including those that affect public health and safety.

How does Rappler guard against partisanship and conflict of interest?

Rappler has a strict policy on conflict of interest. This is not limited to political parties or advocacy organizations. In general, our staff are required to disclose and avoid potential conflicts of interest situations, where loyalty to a person, group or institution could affect their ability to report about them truthfully.

Staff are also advised to avoid taking part in activities or being part of organizations which could limit or compromise their independence and endanger their professional integrity.

These principles are enshrined in Rappler’s Code of Ethics, which was first drafted in 2012 and is updated from time to time as the need arises. The Code of Ethics is annexed to the Code of Conduct which every Rappler signs upon joining the organization.

The Code of Ethics serves as the skeleton/backbone of a daily operations manual that we maintain and update constantly as needed.

Through Move.PH, its civic engagement unit, Rappler works with citizen journalists in communities all over the country and abroad. Citizen journalists also sign the Movers’ Code of Ethics. In our workshops, we ask potential volunteers to adopt this code.

What if you are wrong?

If you spot any factual errors in our reporting, do let us know immediately by emailing feedback@rappler.com

Corrections are made according to the workflow discussed in our Corrections Page, which also lists factual errors and systems infractions spotted and addressed since we started in 2012.

Who are the editors and staff behind Rappler IQ?

Rappler IQ is primarily staffed by a dedicated research unit within Rappler which independently gathers public-interest imbued data and documents from primary sources to aid in fact-checking and verification, monitors content that needs fact-checking, and drafts the fact-check pieces.

The following are the editors and staff who draft, review, and edit the fact check pieces:

Depending on the topic concerned, Rappler editors and reporters are pulled in from time to time to review fact checks based on their respective areas of expertise. Reporters and researchers who work on individual fact-check pieces are credited either in the byline or the tagline for that particular fact-check piece.

Rappler IQ is a project of Rappler Inc., a Philippine corporation registered in July 2011 with the Philippines’ Securities and Exchange Commission (SEC).

For fiscal year 2020, Rappler’s total revenue was at PhP289 million, broken down as follows:

In March 2018, Rappler signed up to become part of Facebook’s Third Party Fact Checker Program and started receiving support for its fact check initiative. In 2020, Rappler also received grants for fact-checking, related research, and initiatives to address online disinformation from the National Endowment of Democracy (NED),  the Friedrich Naumann Foundation (FNF), and Internews.

#FactsFirstPH, the collaborative initiative against disinformation that Rappler is leading, is supported by tech partners Meedan and the Google News Initiative.

Originally registered in July 2011, Rappler Inc got its initial resources and funding from the following companies and individuals:

Above personalities and groups were disclosed in the page about Rappler’s Founding Board.

To maintain our independence and not rely on big business in the Philippines which are often influenced by politics and power, the founders of Rappler decided to look for international investors who share our values about independence and the role of a free press in a robust democracy.

Journalism venture capitalist group North Base Media (NBM) and the Omidyar Network, the investment fund created by eBay founder and entrepreneur Pierre Omidyar and his wife Pam to help businesses use markets and technology for social impact, joined us for less than 15% PDRs in Rappler Holdings in 2015.

PDRs do not confer ownership rights. Thus, even with the NBM and Omidyar investment, ownership of RHC and remained in Filipino hands according to the following configuration: 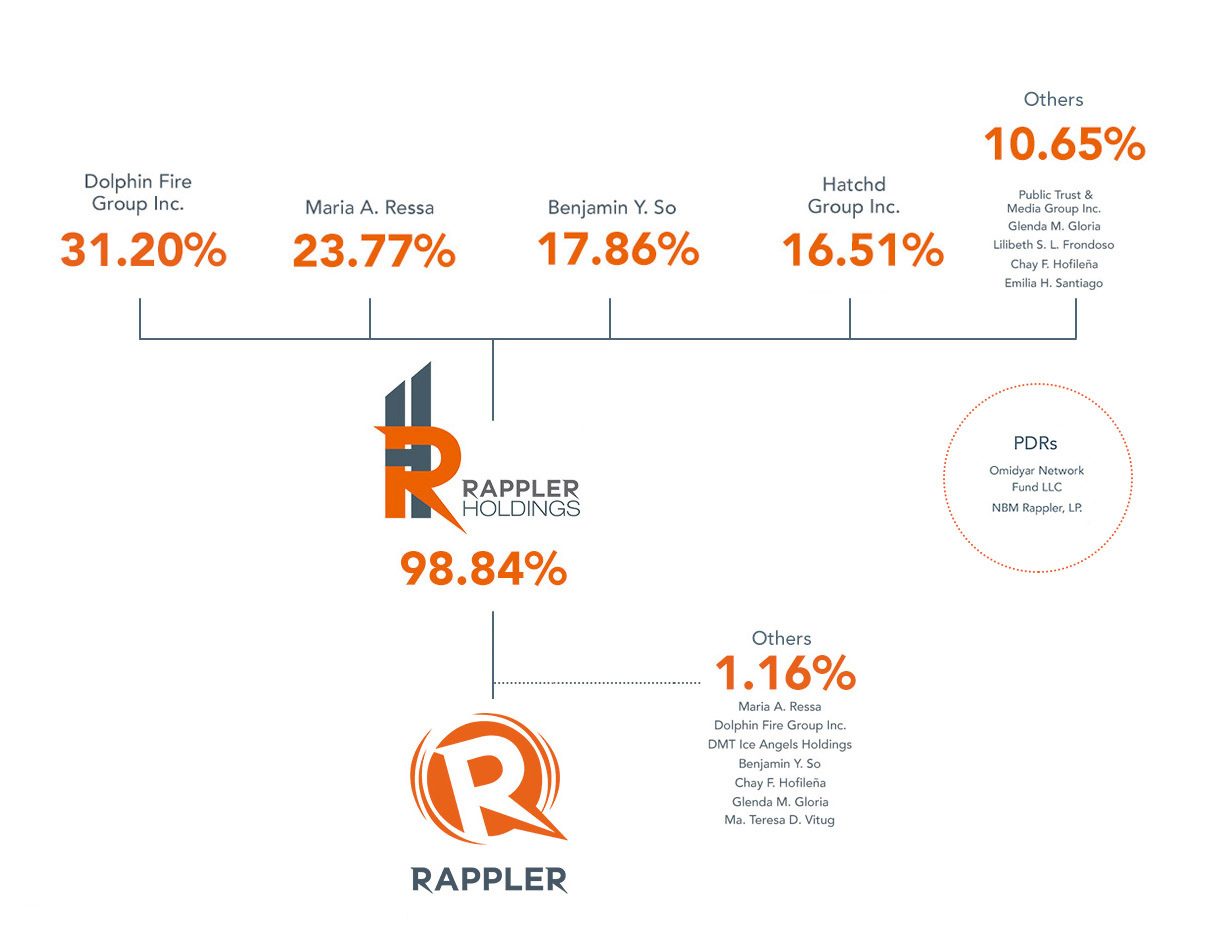 In 2013, Rappler’s board also approved an Employee Stock Option Plan that is still awaiting SEC approval. The founders believe that those who built the company from scratch should be given ownership.

On July 8, 2017, prompted by a letter from the Office of the Solicitor General, the SEC created a “special panel” to conduct a “formal, in-depth examination of Rappler Inc and its parent, Rappler Holdings Corporation, as to possible violations of nationality restrictions on ownership and/or control of Mass Media entities.”

Attacks and cases filed against Rappler

On January 15, 2018, after only 5 months of investigation, the SEC released an en banc decision which voided the Omidyar Philippine Depositary Receipts (PDRs) and revoked the certificates of incorporation of Rappler Inc and RHC, in effect cancelling both companies’ license to operate, a move Rappler has said is politically motivated to shut down voices demanding accountability.

Rappler challenged the move at the Court of Appeals. The company continues to operate.

In February 2018, Omidyar donated its PDRs to 14 Filipino managers of Rappler Inc.

On July 26, 2018, the Court of Appeals denied Rappler’s petition to annul the SEC decision but also ruled that the SEC was wrong to revoke Rappler’s license. The court remanded the case to the SEC for review.

On August 17, 2018, Rappler filed a partial motion for reconsideration of the Court of Appeals decision. In the last week of September 2018, the CA asked the SEC to respond to the motion filed by Rappler.

On February 21, 2019, the CA rejected Rappler’s partial motion for reconsiderationbut also remanded the case to the SEC for review.

On February 10, 2021, the SEC stood by its original ruling in January 2018 to revoke Rappler’s certificates of incorporation. An SEC report to the Court of Appeals (CA) contained this ruling. It said the donation of Rappler’s PDRs to their Filipino managers did not cure the problem. However, the ruling was not immediately executory, as it is pending with the CA. Rappler continues to operate. FAQs: Rappler’s SEC case.

On November 9, 2018, the Department of Justice indicted Rappler’s parent company, RHI, along with its third-party auditor and Maria Ressa, for tax evasion charges over its issuance of PDRs.

Rappler maintains that the tax case no legal basis and is clearly meant to harass and intimidate. Moreover, Rappler legal counsel Francis Lim says the justice department resolution “will have a chilling effect on those who have raised and will raise capital through the issuance of PDRs and is a blow to the development of our already laggard capital markets.” – Rappler.com