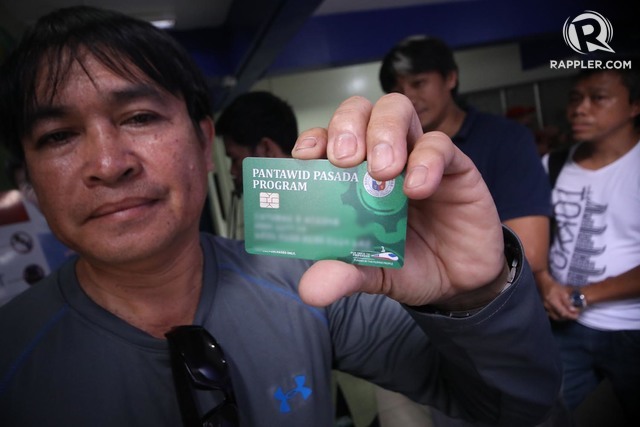 MANILA, Philippines – Budget Secretary Benjamin Diokno on Wednesday, October 17, said the fuel subsidy for jeepney drivers will be affected when the second round of higher excise tax on oil is suspended.

Jeepney drivers were supposed to receive as much as P20,515 in 2019 under the Pantawid Pasada program, with the expected P2 increase in excise taxes on gasoline and diesel.

“[If] we don’t implement the second phase of the tariff, then the adjustment [in the Pantawid Pasada program] shouldn’t be implemented. Why should we increase when we have not adjusted?” Diokno said.

Asked how much the subsidy would be, the budget chief said it would be computed the “same as the 2018 budget.”

With the suspension of the fuel excise tax hike next year, economic managers said the government stands to lose P41 billion. Because of this, Diokno said spending on non-infrastructure items may be cut.

The budget chief gave assurances that expenditures will not be cut “right away” as a team will be created for that. He also said investments on education, health, and social welfare will still be prioritized.

Under the Tax Reform for Acceleration and Inclusion (TRAIN) law, excise tax on fuel would be increased from 2018 to 2020. To ease the burden of higher oil prices, the government gave a subsidy to around 179,000 jeepney drivers across the country.

The TRAIN law also states that tax increases may be suspended if Dubai crude oil prices average at $80 per barrel for 3 straight months.

The Philippines’ inflation rate had jumped to 6.7% in September, the highest in more than 9 years. Economic managers partly attributed the high inflation rate to the global prices of oil. (READ: FAST FACTS: Philippine inflation rate over the years) – Rappler.com