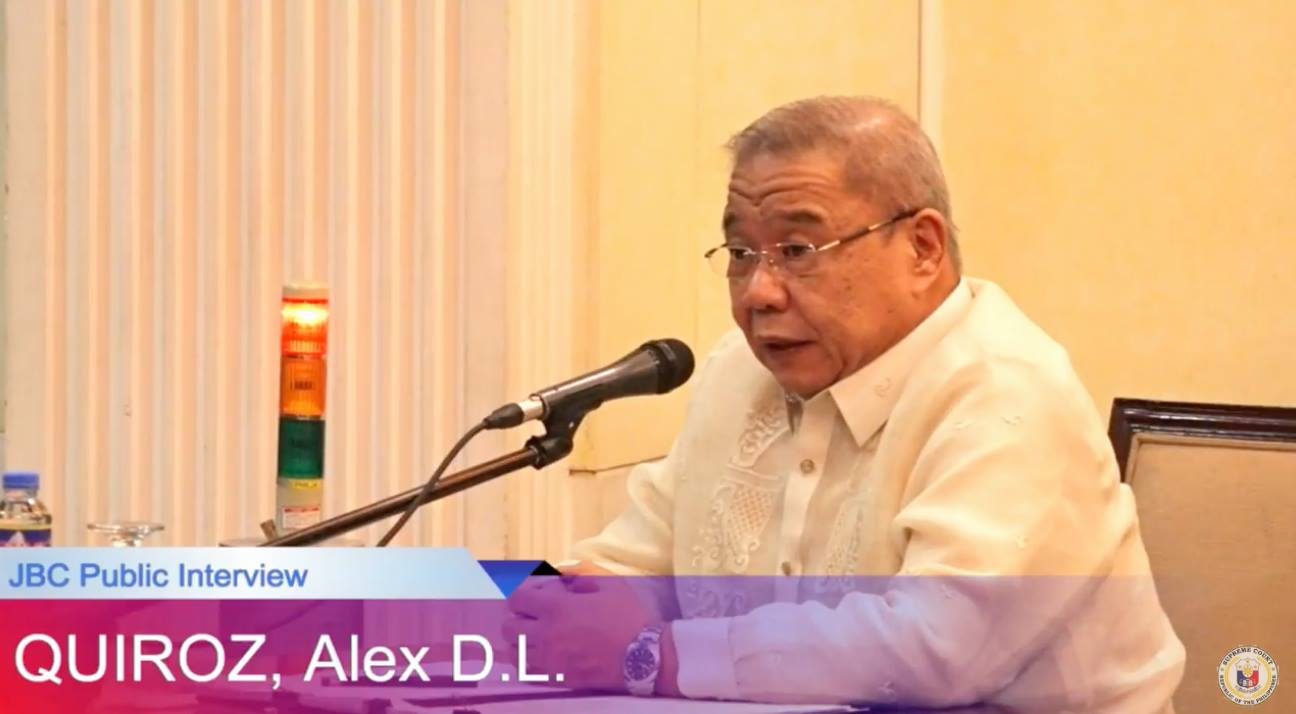 MANILA, Philippines – Sandiganbayan Associate Justice Alex Quiroz said on Thursday, October 18, that if he gets to become a justice of the Supreme Court (SC), he would push for the installation of CCTV cameras in every courtroom in the country.

This, Quiroz said, would discourage misbehavior, especially by judges.

“It would be a deterrent to all presiding judges, that the Supreme Court, through the Office of the Court Administrator, is watching them,” Quiroz said on Thursday in his interview before the Judicial and Bar Council (JBC).

The JBC is screening 12 applicants for the associate justice vacancy left by Teresita de Castro, when she became chief justice. If the next chief justice is an incumbent magistrate, there will once again be a vacancy at the High Court.

Quiroz said he has long been pushing for CCTV cameras, “especially in first and second level courts so as to monitor the conduct and the norms of the trial.”

The answer didn’t get much prodding from retired judge Toribio Ilao, a member of the JBC.

It’s an issue for many courts in the world. For example, India’s Supreme Court last year approved the installation of CCTV cameras in courts for security purposes. But it said the proceedings must not be recorded.

In the Philippines, the SC reiterated in 2011 that court hearings must remain accessible, but recording through electronic devices, particularly by the media, is prohibited.

“The CCTV cameras must be Wi-Fi ready, so as even in the far-flung areas, they could be monitored by the Supreme Court,” said Quiroz.

Ilao later asked Quiroz about opposition to his application describing him as a “habitual drunkard” who is “not intellectually and morally fit.”

The opposition was sent by a certain Luis Martinez, who Quiroz said was a colleague at the Pasig City Metropolitan Trial Court. Martinez claimed Quiroz’s drinking buddies were litigants with pending cases.

Quiroz admitted he used to “enjoy [the] nightlife when [he] was younger,” but dismissed the rest of Martinez’s claims. Ilao did not probe further.

Quiroz also clarified why he inhibited in the plunder case of former immigration officials Al Argosino and Michael Robles, which is pending before his division at the Sandiganbayan. Quiroz said he is acquainted with another plunder defendant, Wally Sombero, who was supposedly the middleman of Chinese tycoon Jack Lam in the alleged P50-million extortion involving the Bureau of Immigration.

“He visited my siblings in the States and would sometimes visit me in my house,” said Quiroz.

The Sandiganbayan 6th Division, which eventually handled the plunder case, recently denied bail to the defendants.

Quiroz was appointed to the Sandiganbayan in 2008 by former president Gloria Macapagal Arroyo. In 2015, he voted to clear Arroyo of plunder in the Philippine Charity Sweepstakes Office intelligence fund scam, but he and Associate Justice Rodolfo Ponferrada were outvoted 3-2.

The SC would later acquit Arroyo, overturning the Sandiganbayan.