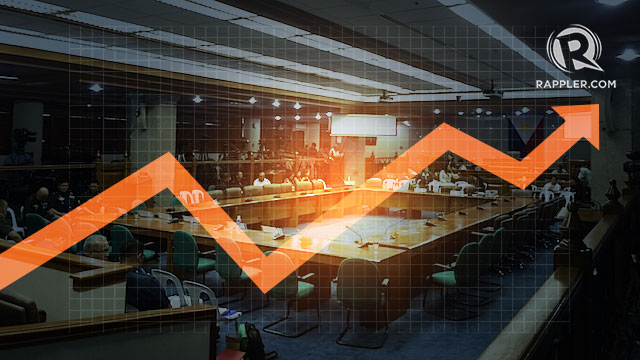 MANILA, Philippines – The net satisfaction ratings of the Senate, House of Representatives, Supreme Court (SC), and the Cabinet all increased in the 3rd quarter of 2018, according to polling firm Social Weather Stations (SWS).

The Senate’s net satisfaction rating increased by 7 points, from +41 in June to +48 in September. This was due to increases in satisfaction in Balance Luzon (13 points) and in Mindanao (12 points), despite decreases in Metro Manila (9 points) and Visayas (1 point).

Meanwhile, the House’s net satisfaction rating rose by 11 points, from +25 in June to +36 in September. Similar to the Senate, the House’s higher rating was driven by increases in Balance Luzon (21 points) and Mindanao (15 points).

The SC’s net satisfaction rating also went up by 12 points, from +19 in June to +31 in September. Its ratings improved across the country.

Satisfaction with the Cabinet decreased in Metro Manila (5 points), but increased in all other areas, leading to a 7-point increase in September at +32, from +25 in June.

Satisfaction ratings fell for all 4 among classes ABC.

Meanwhile, satisfacting ratings increased for both men and women, and across all ages.

The survey was conducted from September 15 to 23 using face-to-face interviews with adults 18 years old and above. SWS spoke to 600 adults in Balance Luzon and 300 people each in Metro Manila, the Visayas, and Mindanao.

At the time of the survey, parts of Luzon were reeling from the impact of Typhoon Ompong (Mangkhut), retired major general Jovito Palparan was found guilty of kidnapping and serious illegal detention, and former Senate president Juan Ponce Enrile was denounced for making false claims about Martial Law. – Rappler.com