Oct 22, 2018 11:29 AM PHT
Paterno Esmaquel II
Facebook Twitter Copy URL
Copied
British Ambassador to the Philippines Daniel Pruce says the murder of 9 farm workers in Negros Occidental is 'a tragedy for the victims and their loved ones' 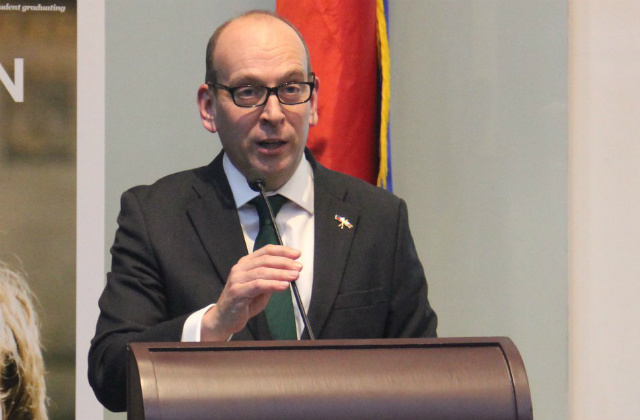 MANILA, Philippines – Horrified by the tragedy, British Ambassador to the Philippines Daniel Pruce denounced the murder of 9 farmers in Sagay City, Negros Occidental, which Malacañang also condemned “in the strongest possible terms.”

“Horrified by [Saturday’s] murder of 9 farm workers in Sagay City. A tragedy for the victims and their loved ones,” Pruce said in a tweet Monday morning, October 22.

The Philippine National Police on Monday said it already has a person of interest in the Negros farmers’ slay.

Presidential Spokesperson Salvador Panelo earlier said Malacañang “is deeply perturbed” about the incident, which he denounced as a “dastardly act.”

The victims, including 4 women and 2 minors, were resting at their makeshift shelter on Saturday evening, October 20, when dozens of men reportedly shot at them inside Hacienda Nene in Barangay Bulanon, Sagay City.

The National Federation of Sugar Workers, where the victims belonged to, denounced the farmers’ slay. They said landlords, “deathly afraid of the unified strength of the farmers,” use “brute force and even killings to attack farmers” who assert their rights.

In a separate comment, Anakpawis Representative Ariel Casilao on Sunday, October 21, blamed the Duterte administration for the deaths of the farmers.

Casilao said the incident was a clear case of mass murder and was “brutal and barbaric.” He also said a “swift and impartial investigation” should immediately be conducted. – Rappler.com