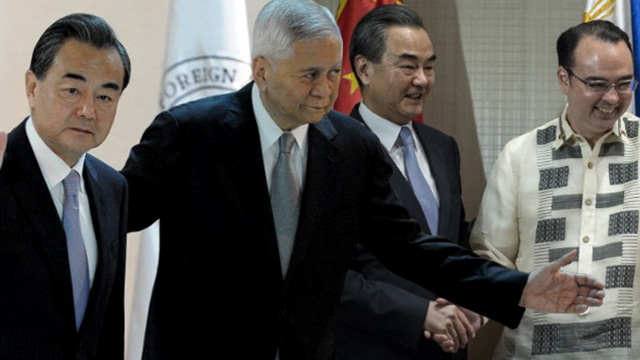 MANILA, Philippines – Next to the head of state or government, the foreign minister is the most powerful person representing his or her country in other parts of the world.

The foreign minister, also called the foreign secretary (or in the US, the Secretary of State), is not just another Cabinet member.

It goes without saying that Chinese Foreign Minister Wang Yi’s trip to the Philippines from Sunday, October 28, to Monday, October 29 – his second visit in little over a year – is a big deal.

It is a bigger deal if we consider the context: Wang is China’s top diplomat who, under the Aquino administration, once snubbed the Philippines as he embarked on Asian trips.

The first time was when Wang visited Thailand, Indonesia, Singapore, and Brunei for a period of 6 days – Southeast Asia being his first overseas destination as foreign minister, according to the Manila Standard. Wang skipped the Philippines.

Then, in July 2013, Del Rosario said he invited Wang to visit the country. This was after a heated exchange between them in a closed-door meeting at an Association of Southeast Nations (ASEAN) forum in Brunei.

Back then, according to Reuters, Del Rosario walked into the Sunday forum “to hear his Chinese counterpart Wang Yi reel off a list of complaints against Manila for stirring tensions over the South China Sea.”

“Del Rosario was not scheduled to speak, but after hearing Wang’s speech at Sunday’s closed-door meeting in the kingdom of Brunei, he raised his hand and proceeded to rebut China’s allegations one by one, according to Philippine diplomats,” Reuters reported.

This was 7 months after the Philippines filed a historic case against China over the West Philippine Sea in January 2013. (The Philippines ended up winning this case in July 2016.)

Del Rosario later told reporters he “will not deny what has been reported,” but he will not add to it.

Despite this, Del Rosario said in July 2013 that he invited Wang to visit the Philippines.

“I indicated to him that perhaps it’s timely for him to do this, because I have been to Beijing 3 times since I became foreign minister and all throughout that time, we have had no visits from a Chinese foreign minister,” Del Rosario said back then.

Wang said he will “consider” it. For two years, the visit never came to be.

Things changed in November 2015, when Wang embarked on a working visit to the Philippines. Wang came to prepare for Chinese President Xi Jinping’s trip to Manila for the Asia-Pacific Economic Cooperation Summit, and also to talk about ties between Manila and Beijing.

During his November 2015 working visit, Wang held a bilateral meeting with Del Rosario at the Department of Foreign Affairs in Pasay City. China’s top diplomat also paid a courtesy call on then president Benigno Aquino III.

The kind of trip Wang made in November 2015 – a working visit – is one where the host country does not pay for the visitor’s expenses. It is the least prestigious kind of the trips made by foreign dignitaries – the highest being a state visit, followed by an official visit.

The heat of a sea dispute still made this trip harder for him to bear.

But with the change in presidents on June 30, 2016, came a change in climate between Manila and Beijing.

In July 2017, Wang returned to the Philippines on an official visit, a more special kind of trip where the host country usually shoulders the visitor’s expenses.

In this official visit, Wang pushed for joint development to extract oil and natural gas in the West Philippine Sea, which China claims despite an international ruling that says the Philippines has exclusive rights over these waters. He said joint development in the area is “full of political wisdom.”

He also said China is offering itself as a “good brother” of the Philippines.

China, after all, is courting Duterte after it lost the case filed by the Aquino administration. At the same time, Duterte is cozying up to nontraditional allies such as China and Russia because he detests Western countries like the US.

Months after his July 2017 trip, Wang was supposed to return to the Philippines from September 16 to 18 this year. He was set to hold discussions on the proposed joint exploration of the West Philippine Sea – but had to cancel his trip due to Typhoon Ompong (Mangkhut).

In his rescheduled trip to the Philippines from October 28 to 29, Wang is again expected to take up joint exploration of the West Philippine Sea. He is also seen to prepare for Xi’s own Philippine visit the following month.

The venue? Nothing can be more significant – and symbolic – than Duterte’s hometown of Davao City.