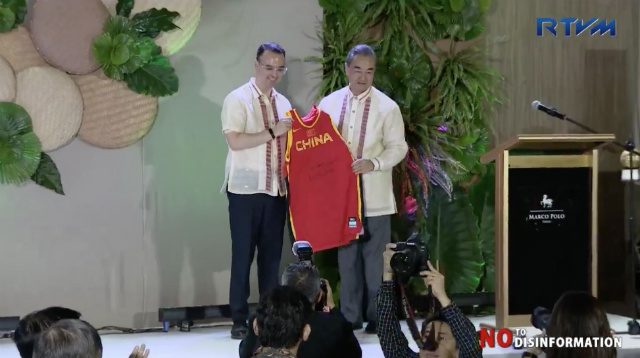 “Of course today’s birthday celebrator, Mr Cayetano, is also one of our best friends. He’s also my good friend,” Wang said in his message to Cayetano.

“Mr Cayetano may not be old in age but certainly he has the Philippines, his nation, in his heart. When he served as the foreign secretary, he has advanced the interest of the Philippines worldwide. He is not only a great political leader. He is also a very successful diplomat,” Wang added.

Cayetano, who recently resigned as Philippine foreign secretary, had pushed for joint exploration of the West Philippine Sea (South China Sea) with China.

Still, Wang said: “In my view, when Mr Cayetano served as the foreign secretary, one of his most important accomplishments was that he has followed the direction and instruction of President Duterte to overcome various kinds of difficulties, and helped bring about a full turnaround of bilateral relations between China and the Philippines, helping to put the bilateral relations back in the right path.”

To show his gratitude to Cayetano, Wang gave Cayetano, as a birthday gift, a basketball jersey signed by former NBA star Yao Ming. Cayetano is a basketball fan.

Around two hours later, Wang led the inauguration of the new Chinese consulate in Davao City.

On Monday, October 29, Wang will hold most of his events at Marco Polo Hotel. There, he will meet with Locsin and Duterte’s economic managers, sign bilateral documents, and hold a press conference.

Locsin and Wang will witness the signing of bilateral agreements on infrastructure, law enforcement, and humanitarian assistance. – Rappler.com