Wang Yi: Duterte ‘the most respected friend’ of Xi Jinping 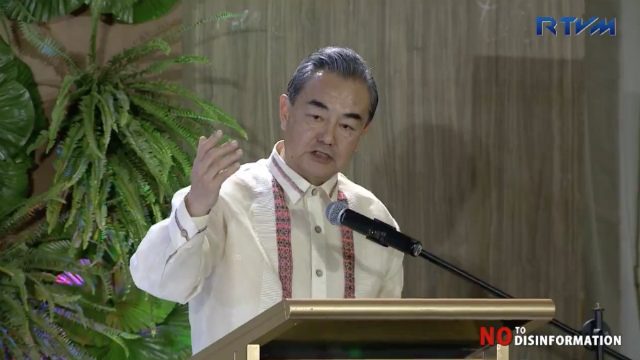 DAVAO CITY, Philippines – The native Filipino barong he wore on Sunday evening, October 28, was in itself the message he wanted to impart.

“I know that you have invited me here tonight because you see me as your friend and as your partner,” said Chinese State Councilor and Foreign Minister Wang Yi.

“That is why I have worn this barong to show you that tonight I am a member of your family,” said the usually stoic Wang in a speech for the 48th birthday party of Alan Peter Cayetano, former foreign secretary of the Philippines. (READ: China’s top diplomat attends Cayetano birthday party)

Wang arrived in Davao City on Sunday for a two-day trip that aims to boost ties between Manila and Beijing. Cayetano’s birthday party, which was held at Marco Polo Hotel, was his second stop on Sunday, after inaugurating the new Chinese consulate in Davao City.

In his speech at Cayetano’s birthday party on Sunday, Wang also addressed President Rodrigo Duterte, who was among Cayetano’s guests. He made a telling remark about how Chinese President Xi Jinping regards the Philippine leader.

“Actually President Duterte is the most respected and the most important friend for President Xi Jinping and the Chinese people. And of course today’s birthday celebrator Mr Cayetano is also one of our best friends. He’s also my good friend,” Wang said.

He went on to add, “Facts have proven and will continue to prove that the friendly policy toward China adopted by President Duterte is completely in keeping with the fundamental and long-term interests of the Philippines and the Filipinos.”

This comes as the Duterte administration is pushing for joint exploration of the West Philippine Sea (South China Sea) with China.

In his own speech, Duterte told Wang in jest, “Maybe you can allow us, your excellency, in the long term, maybe payable, I’m sure our friendship will enjoy a thousand years. So if you can grant us a facility, a loan, payable within 100 years, I’m sure.”

That late evening, Duterte talked for around an hour and a half about various topics, such as asking members of the Armed Forces of the Philippines to “take over” the Bureau of Customs, and warning that he will order the arrest of groups that occupy government and private properties.

Duterte’s speech lasted until past midnight.

Wang in his barong sat through it all. – Rappler.com