Oct 30, 2018 9:42 AM PHT
Jodesz Gavilan
Facebook Twitter Copy URL
Copied
One of the supposed Lumad at Mocha Uson's 'protest' at the University of the Philippines Diliman campus is linked to a paramilitary group, say Lumad rights advocates 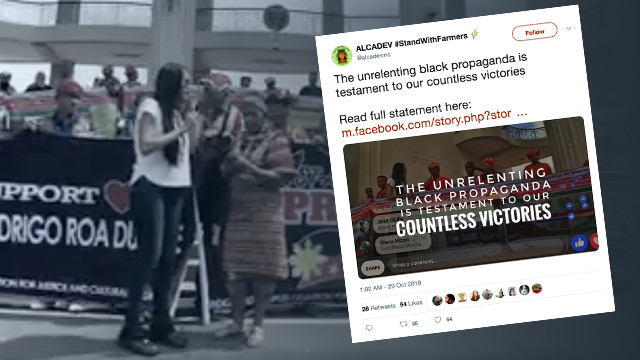 Student and human rights groups on Monday, October 29, condemned Uson’s act as an attempt to red-tag people working to protect and improve the welfare of IPs.

Uson, who became controversial for posting false information even when she was a government official, led a group of alleged Lumad chanting their support for President Rodrigo Duterte while calling the Communist Party of the Philippines-New People’s Army (CPP-NPA) for its “atrocities.” (READ: Mocha Uson: Fake news victim or fake news peddler?)

She also repeatedly referred to the group she was with as “ang totoong Lumad at hindi iyong mga binibihisan lang at dinadala sa Maynila para mag-rally (the true Lumad ang not just those who were just dressed up and brought to Manila to protest).”

Alternative Learning Center for Agricultural and Livelihood Development (Alcadev), an alternative learning system providing education for indigenous youth, slammed Uson’s use of “bogus Lumad leaders” in attacking the IP community. (INFOGRAPHIC: Who are the Lumad?)

“We have already shown the kind of education that we offer – one that is nationalist, scientific and mass-oriented,” it said in a statement. “We have shown how the Lumad people have been so productive in tilling the ancestral lands and most importantly, we have been relentless in fighting for our right to self-determination.”

Alcadev and other groups such as Save Our Schools network and the Mindanao Interfaith Services Foundation have consistently advocated respect for and protection of Lumad rights amid the reported rampant militarization and abuse in several communities. (READ: What the Lumad are fighting for)

Each year, hundreds of Lumad join the protest caravan called Lakbayan which goes to Metro Manila and other major cities where they talk about their plight. In 2017, they called for the lifting of martial law in Mindanao.

Alcadev also pointed out that one of the people shown in Uson’s video is Jumar “Marcos” Bocales, alleged leader of paramilitary group Magahat-Bagani.

The group claimed Bocales is linked to the massacre of a school head and two Lumad leaders in Surigao del Sur in 2015 and is involved in selling ancestral lands to mining companies.

The UP Diliman Student Council hit Uson’s actions and presence in the campus. In a statement, it said that the public should be wary of those invoking freedom of expression when they are in fact endangering the lives of others, among them IP groups, progressive organizations, and students. (Rappler Talk: Resisting red-tagging in universities)

(There is no space in UP for the likes of Mocha Uson who is known for defending the dictatorship of President Rodrigo Duterte who continues to endanger Lumad in their fight for their ancestral domain, self-determination, and education.)

Calls against red-tagging come almost a month after the Armed Forces of the Philippines (AFP) floated the supposed communist-led Red October ouster plot against Duterte. The CPP reportedly tapped students in various universities in Metro Manila for the plot.

Several student organizations, officials, and the Commission on Human Rights condemned the allegations as baseless and dangerous. – Rappler.com