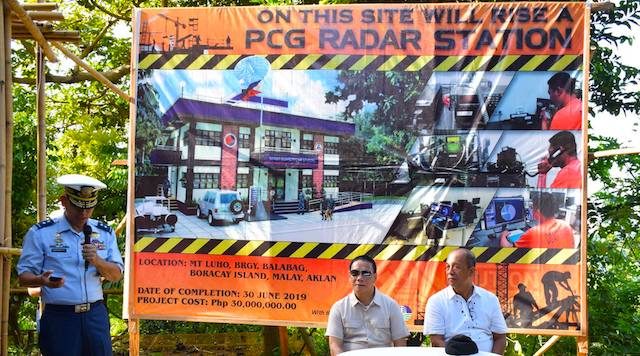 The radar station in Mount Luho in Barangay Balabag will be critical in monitoring vessel movements and in preventing the possible entry of terrorists in the island and its vicinity, the PCG said.

The PCG said the radar station is expected to be operational by June 2019.

The PCG said it will build 20 other radar stations in Palawan and critical areas across Mindanao especially in  Zamboanga, Basilan, Sulu, and Tawi-Tawi (Zambasulta); and other popular tourist spots in the region. The radar stations in Mindanao would be funded by the local government and the government of Japan. Meanwhile, about 215 PCG-trained lifeguards are ready for deployment to safeguard tourists and beachgoers in Boracay Island. The Basic Life Saving (BLS) course for male and female recruits started in August in preparation for the Boracay reopening on October 26.

PCG targets to provide qualified lifeguards to all beachfront resorts and hotels with swimming pools in the island, and water sports establishments.

The lifeguards are tasked to maintain and set safe swimming areas, and to monitor rip currents and tides.

On October 26, the PCG reminded the lifeguards of their role as first responders in emergencies and the beaches of Boracay during the BLS course graduation at White House Resort in Station 1.

“We take this opportunity to train local residents to become lifeguards, and to improve their skills in saving lives,” Legaspi said.

The island, which attracts more than 2 million visitors a year, was shut down on April 26 to ensure sustainable tourism. – Rappler.com