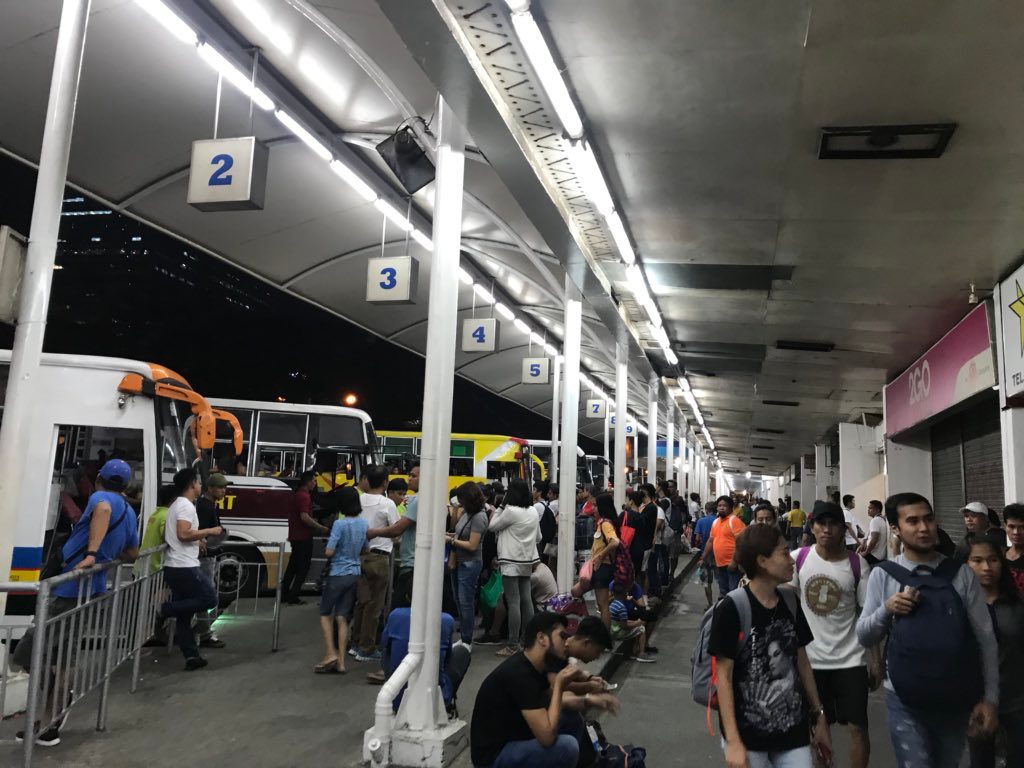 MANILA, Philippines – Thousands of commuters flocked airports and bus terminals Wednesday night, October 31, bound for the provinces ahead of Undas, which falls on a 4-day weekend.

At 9 pm, Romeo Ventanilla has already been standing in line with his family for over an hour to ride a bus to Lingayen, Pangasinan, at Victory Liner. He said he will be visiting his late father.

(Last year, we got to ride right away because there weren’t as many people then. Unlike now that it’s a long weekend, there are more people from work who will go home.)

Ventanilla said that, he doesn’t think the line will be moving as fast as he wanted to.

(Maybe around two hours more. Maybe at 11 pm. With that many people, I checked the lines, it wasn’t moving.)

As of 9 pm, the Quezon City police said more people continued to troop to bus terminals. A total of 8,420 people were at the terminals, with the Five Star bus station in Cubao having the most waiting passengers at 2,400.

LOOK: Line of passengers waiting for a bus to Cabanatuan at Five Star terminal in Cubao @rapplerdotcom pic.twitter.com/r2q12v01Hg

In a briefing on Wednesday, October 31, Acting Road Transport Undersecretary Mark de Leon said that the Land Transportation Franchising and Regulatory Board (LTFRB) has monitored if there are enough existing franchises for the influx of passengers.

Security has been tightened in 30 Quezon City bus terminals with around 120 cops deployed for Undas.

Ralph Nama, 21, said he feels safer now than his commutes in the previous years. This year, he will be visiting a friend in Olongapo.

At the airports, the Manila International Airport Authority (MIAA) recorded 18,354 passengers leaving Metro Manila for the provinces as early as Tuesday, October 30.

The figure is 17% more than the domestic depatures in the previous year.

MIAA General Manager Ed Monreal said on Wednesday that security within the airports were tightened given the influx of passengers.

Transportation Assistant Secretary Manuel Gonzales, head of Task Force Undas, said that each agencies have come up with plans per situation that will be implemented for the long weekend.

“The objective of Oplan Undas 2018 is to come up with a situation for all attached agencies to have an implementing plan. We will implement this and be on 24/7 operations,” Gonzales said on Wednesday.

He also said that all agencies’ hotlines will be accessible, as well its social media accounts. (READ: MMDA: No days off for traffic personnel during Undas 2018)

Help desks for commuters are also stationed at all ports and terminals for those who need assistance. – Rappler.com