Nov 2, 2018 10:02 AM PHT
Richard Falcatan
Facebook Twitter Copy URL
Copied
Continued military operations against the Abu Sayyaf in Panamao, Sulu, paved the way for the rescue of Jose Duterte on All Saints' Day 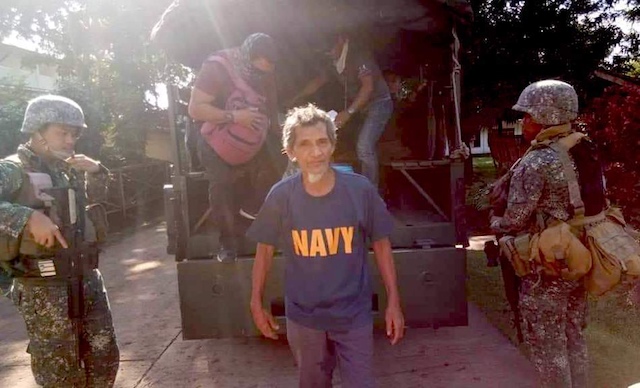 ZAMBOANGA CITY, Philippines – Government troops have rescued a kidnap victim who had been held by the Abu Sayyaf group for over a year in Sulu, the military said.

Continued military operations against the Abu Sayyaf in Panamao, Sulu, paved the way for the rescue of Jose Duterte, 66, on Thursday, November 1.

The kidnap victim is not related to President Rodrigo Duterte.

The Philippine Navy in Sulu, with Marine Battalion Landing Team 3, rescued Duterte early Thursday afternoon, a few days after troops neutralized and captured a number of ASG members in the area.

At the time of his rescue on Thursday, Duterte was help by a group under Abu Sayyaf subleader Injam Yadah.

The team conducted the rescue operations in the vicinity of Barangay Kandayok in Panamao adjacent to the recent encounter site with the ASG.

The rescued kidnap victim was immediately brought to the Camp Teodulfo Bautista Station Hospital  in Jolo for medical check up and debriefing. – Rappler.com