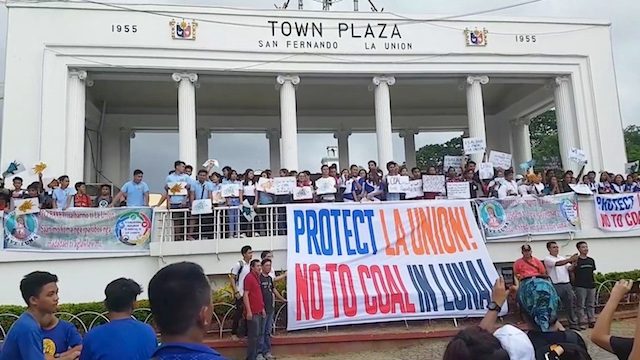 With an ECC, GLEDC can now secure necessary and relevant permits from other government agencies. Once completed, it can proceed with project implementation.

The project faces opposition from residents and environmental groups who are pushing for a local anti-coal ordinance just like what was done in Ilocos Norte, Bohol, and other provinces.

Joshua Maquiling of the Philippine Movement for Climate Justice said they found out about the ECC on Wednesday, October 31, and were dismayed with the decision, adding that the EMB played blind and deaf despite the overwhelming opposition of the affected residents.

For Maquiling, this is clearly denying the best interest of the municipality.

Where is the final EIS? According to EMB Director Metodio Turbella, GLEDC’s coal-fired power plant project already has a final Environmental Impact Statement (EIS) report that will be made public once the ECC has been issued.

According to the Philippine EIS System, an EIS is “a comprehensive study of the significant impacts of a project on the environment,” prepared by the project proponent and/or EIA consultant for an ECC application.

It should include an Environmental Management Plan/Program that the proponent will fund and implement to protect the environment.

The EMB issued the ECC last October 5 but to date, the final EIS has not yet been made public. The EMB office did not respond to our request for an interview.

Stakeholders opposing the project continue to demand a copy of the final EIS. Maquiling said they will “challenge and will institute legal complaints soon.”

In an earlier letter to Save Luna’s (Support and Advocate Valiantly for the Environment of Luna) legal counsel Romeo Camacho, Turbella stated that his office cannot grant their request to get a copy of the project’s final EIS because it is considered confidential.

He cited Section 3.1.5 of DENR Administrative Order 97-24 which states that “documents classified as confidential are solely available to concerned DENR officials/personnel and therefore cannot be accessed, handled, and reproduced by unauthorized persons.”

However, for Camacho, applying this rule is not within his power or authority because it is vested on the secretary of the DENR or his designated officer.

As such, Camacho challenged Turbella for arrogating upon himself the power or authority that does not rightfully belong to him because it belongs to the head of the department, Environment Secretary Roy Cimatu.

He also emphasized that Turbella cannot rule on what documents can be accessed or not because he’s not the department’s designated officer.

Camacho also accused Turbella of keeping the matter from the secretary. According to him, “not once did you furnish him a copy of your letter to us,” except the ECC.

But the overriding reason Camacho and his group are asking for a copy of the final EIS is because they are among the stakeholders.

“We need the documents so badly because we, the residents of Luna, who stand to be affected by the decision of your office, would like to be part of the decision-making process,” he said.

According to the implementing rules and regulations of the Philippine EIS System, stakeholders are entities who may be directly and significantly affected by the project or undertaking.

It said the effective regulatory review of the EIS depends largely on timely, full, and accurate disclosure of relevant information by project proponents and other stakeholders in the Environmental Impact Assessment (EIA) process.

More importantly, the process is undertaken by the project proponent and/or EIA consultant, the EMB, a review committee, affected communities, and other stakeholders, among others. – Rappler.com