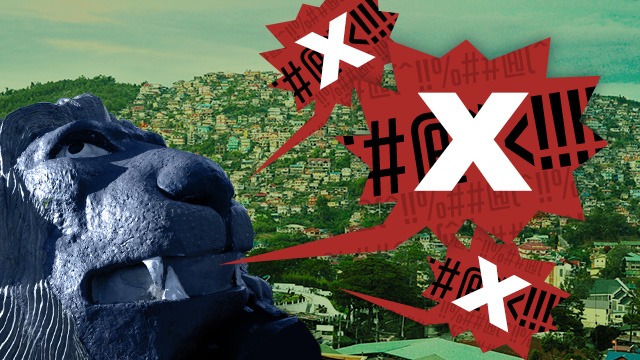 BAGUIO, Philippines – Guess who will feel left out in the Summer Capital of the Philippines?

The ordinance, authored by Councilor Lilia Fariñas, bans swearing, cussing, and other forms of profanity in schools, computer shops, arcades, and other business establishments frequented by children, high school, and college students in the city.

Students can be expelled if they violate the ordinance.

The ordinance says that profanity is observed everywhere but has “already penetrated schools and educational systems, business establishments, and society as a whole, that even the very fabric of morals and human decency has deteriorated to such a degree that we have to prevent it before the damage would become irreparable.”

The ordinance declares that all schools in all levels, those providing technical and vocational education and training, business establishment frequented by children as well as high school and college students, are mandated to provide signs that prohibits cursing, cussing, expressing insults, whether directly or indirectly to anyone as a means of expression.

The ordinance suggests that teachers, principals, school administrators, and assigned class officers institute class and school policies apprehending violators, and, if persistent, shall employ graduating consequences for every violation.

The penalty of expulsion for the violation is given under the prerogative of the school.

Business establishments are obligated to hang or post signages in their premises that campaign about the ordinance. – Rappler.com