Nov 7, 2018 8:00 AM PHT
Agence France-Presse
Facebook Twitter Copy URL
Copied
For those who survived the storm, the intervening years have been filled with painful steps forward, but also, a determination to not give up despite overwhelming challenges 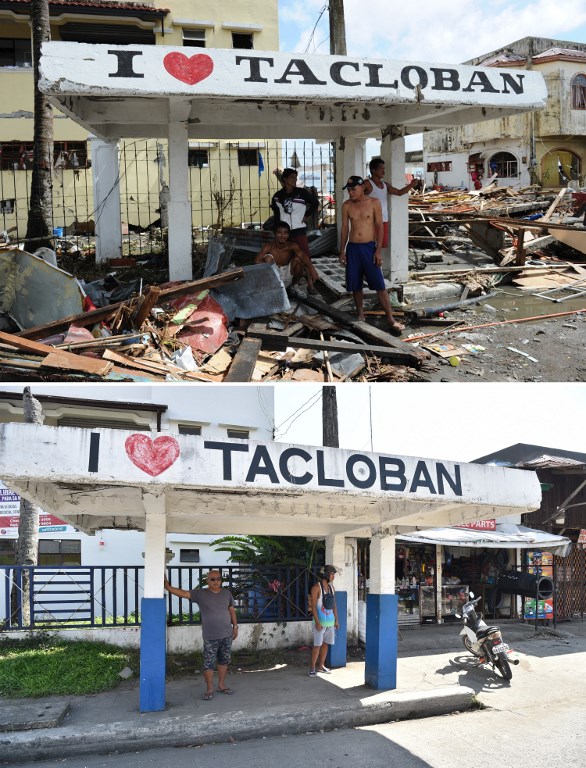 MANILA, Philippines – The Philippines’ catastrophic Super Typhoon Yolanda (Haiyan) stole almost everything from Juvilyn Luana and Joel Aradana – their spouses, children and homes – but in each other they found love and the strength to start a new family.

“No matter how many storms hit us, we are still hopeful because life goes on,” Luana told Agence France-Presse (AFP), cradling the couple’s one-year-old baby boy. “It’s hard to lose hope because there are many things we are looking forward to.”

The pair were among the survivors AFP interviewed after the storm, and has now followed up on for the fifth anniversary of the deadliest recorded typhoon to hit the disaster-prone country. 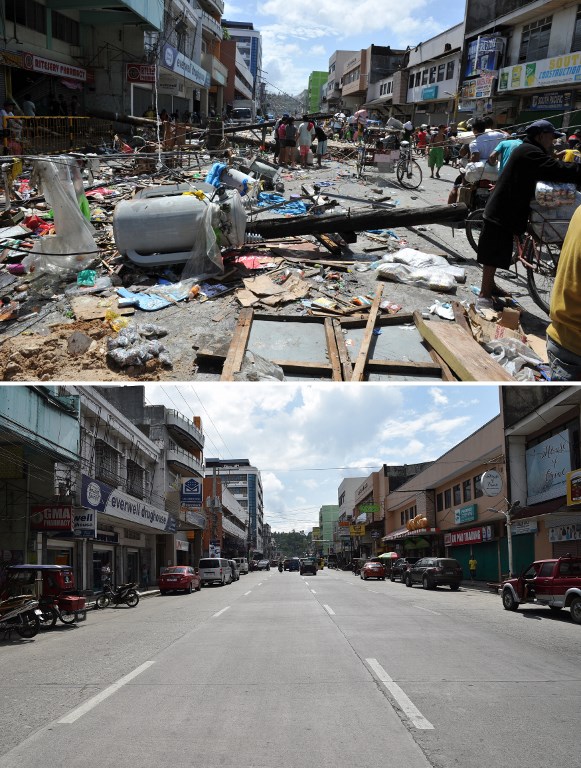 For those who survived the storm, the intervening years have been filled with painful steps forward, but also, a determination to not give up despite overwhelming challenges.

For Luana, the news that her husband of 13 years and 6 children were killed in the November 8, 2013 disaster pushed her to the brink of suicide.

In 2014, she told AFP that the only reason she did not do it was because she could not find anything tall enough from which to hang herself with a rope scavenged from the rubble.

But then she met Aradana, who lost his wife and two of his 5 children, at a cash-for-work programme for survivors and slowly began to heal. 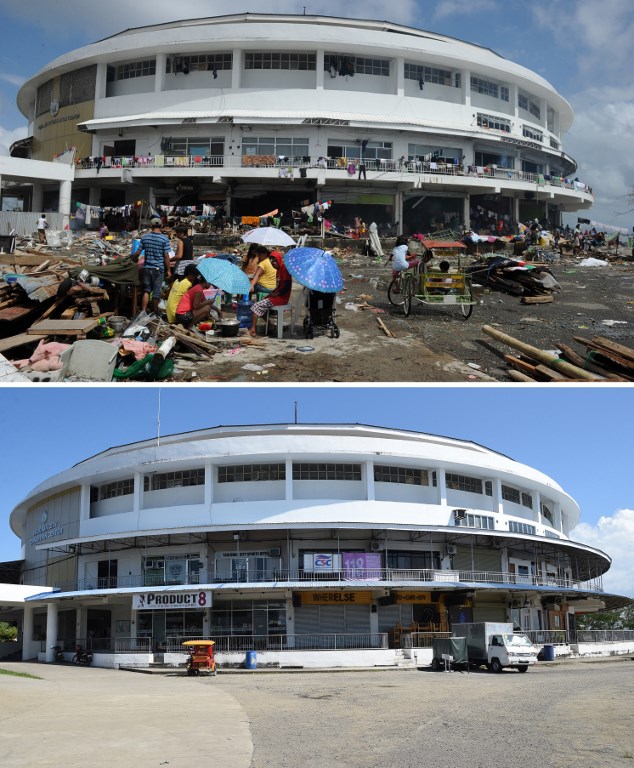 Yet every day remains a struggle. The storm wiped out communities and left a million families homeless in the central Philippines, including worst-hit Tacloban city, already among the nation’s poorest.

Aradana is a construction worker earning less than $10 a day while Luana looks after their children.

They live in housing built by a charity group away from their homes in the danger zone, but near a foul-smelling garbage dump where they struggle to get clean drinking water.

Another survivor, 46-year-old Elsie Indic, was photographed by AFP as part of a procession thanking God for sparing the lives of the people in their village Opong.

The image won the Spot News category in the prestigious World Press Photo Awards, and was named by Time magazine as one of the top images of 2013. 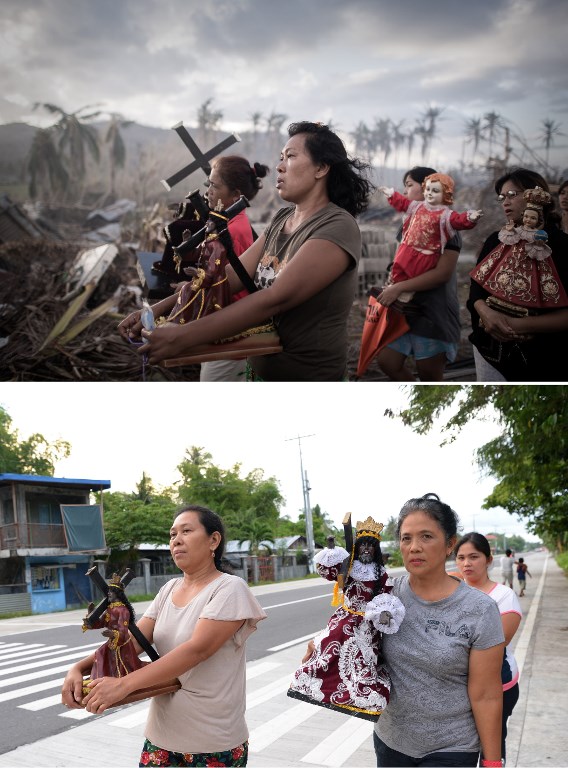 Though she, her husband and 4 children managed to escape the deadly storm surge, they are confronted daily by the struggle to make a living.

Since her husband suffered a stroke in 2016 he has not been able to work, which means she and the children – now in their teens and 20s – need to all pitch in their meagre earnings to survive.

Indic puts all of her hope in her children, praying every morning before she gets out of bed that they will finish university and find good jobs.

“I don’t ask for wealth. I ask for moderate blessings,” she said. “I pray that he give them (her children) a  better life. That’s all I’m asking God.” 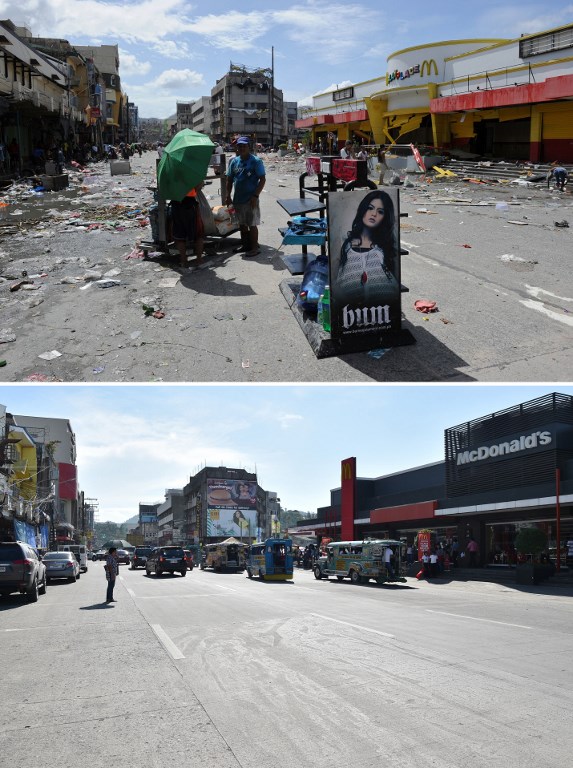 Hope for the future

Emelie Ortega, 26, has also put her hopes in her offspring.

Her oldest child was born days after the storm on a debris-strewn floor of Tacloban’s destroyed airport building, in a moment captured by AFP and other media.

Baby Bea is about to turn 5 and now has a one-year-old brother. 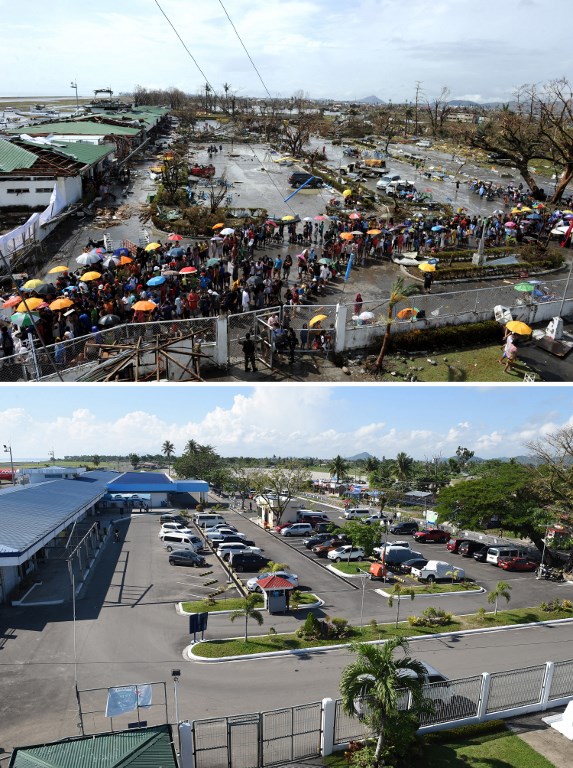 Yet Ortega said the only way to provide for her children is to leave them with her husband and take a job in Saudi Arabia as a domestic worker, like scores of other poor Filipinas.

It leaves her worried over who will defend her daughter from a nasty nickname.

“My daughter gets mad when people call her Yolanda,” Ortega said, referring to Haiyan’s local name. “I tell them not to do that because Yolanda was cruel.” 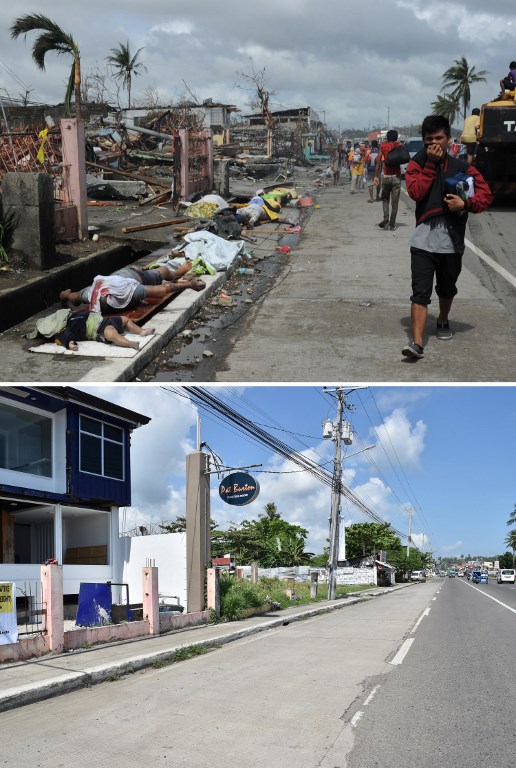