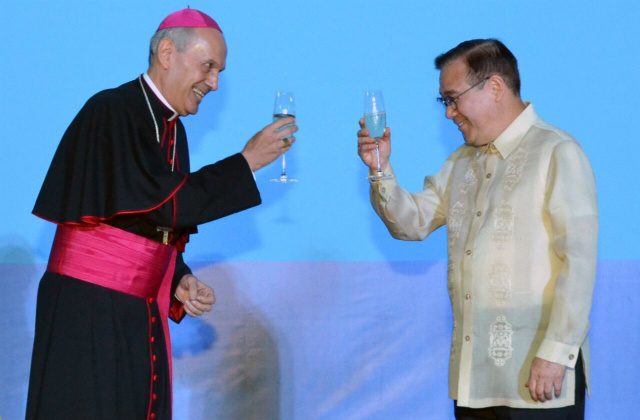 Facebook Twitter Copy URL
Copied
It was 'friends to all, enemies to none' under Alan Peter Cayetano. Now Foreign Secretary Teodoro 'Teddyboy' Locsin is making a 'refinement.'

MANILA, Philippines – From “friends to all, enemies to none” under his predecessor, Philippine Foreign Secretary Teodoro “Teddyboy” Locsin Jr sought to “refine” the foreign policy of the Duterte administration to address “changing realities.”

“You know it already. It is a refinement of the earlier one which stood us in good stead: ‘Friends to all, enemies to none.’ But we are moving on to a refinement which addresses changing realities. It is now ‘Friends to friends, enemies to enemies, and worse enemies to false friends,'” Locsin said at the vin d’honneur he hosted for members of the diplomatic corps on Wednesday morning, November 7.

“Friends to all, enemies to none” was a battlecry of Locsin’s predecessor, Alan Peter Cayetano, who quit his job at the Department of Foreign Affairs (DFA) to run for Taguig congressman.

In his first major foreign policy speech on Wednesday, Locsin spoke about a “refinement” as the Duterte administration pushes for an independent foreign policy as mandated by the Constitution.

President Rodrigo Duterte has vowed to move away from the Philippines’ former colonizer and traditional ally, the US, and closer to China and Russia. This is because he detests supposed Western interference in his administration’s bloody anti-drug campaign, and he claims China and Russia have been quicker to help the Philippines in times of need.

Experts have criticized this policy, saying that the Philippines appeared to just be changing masters. As maritime law expert Jay Batongbacal asked in a July 2017 article on Interaksyon, “Is it really independent foreign policy, or are we just trading one perceived master for another?”

Despite criticism, Locsin assured diplomats on Wednesday that the Duterte administration is pursuing “a truly independent foreign policy.”

At the same time, he stressed the need for continuity.

“I am not here to reinvent the wheel; just to grease it and steer it away from potholes and ravines. I shall continue to implement the President’s directive to provide a ‘comfortable and secure life’ for all Filipinos, in every aspect of the country’s diplomacy and foreign policy,” said Locsin.

In his speech, Locsin also addressed specific issues such as the one on the West Philippine Sea.

“Zero nuclear capability notwithstanding, our handling of the West Philippine Sea issue continues to produce concrete results at no cost to our dignity though with some taxing of our patience,” Locsin said.

“The country was able to advance its interests, derive economic benefit, and contribute to peace and stability in the South China Sea, without surrendering an iota of Philippine sovereignty and sovereign rights, not retreating one inch from its rightful and inalienable ownership of everything within the lawful territorial reach of our sovereignty,” he added.

Locsin’s predecessor, Cayetano, pushed for joint development of the West Philippine Sea by Manila and Beijing, even if experts such as Supreme Court Senior Associate Justice Antonio Carpio warned that this could be unconstitutional.

Locsin said nothing about joint development in Wednesday’s speech. But he reiterated that differences between Manila and Beijing “need not stand in the way of mutually beneficial cooperation in other areas of common endeavor.”

He added that the Association of Southeast Asian Nations and China “are moving forward with astonishing amity in negotiations toward a Code of Conduct” in the disputed South China Sea.

Locsin also made a potshot at those quick to condemn other countries. He said that sovereign states, after all, “are still the best guarantee of respect and vindication of human rights at home and abroad.” He said others should ask before they condemn.

“Just ask them before condemning them. After all the United Nations and its agencies is a collection of sovereignties. It is not itself a sovereign collective,” Locsin said.

Before becoming foreign secretary, Locsin was previously the Philippines’ permanent representative to the United Nations.

His profile on the DFA website describes him “a lawyer by profession and a journalist by trade.” A master of laws graduate from Harvard Law School, he was once newspaper publisher, congressman, and speechwriter to 3 Philippine presidents. (READ: FAST FACTS: Who is DFA chief Teddyboy Locsin?) – Rappler.com