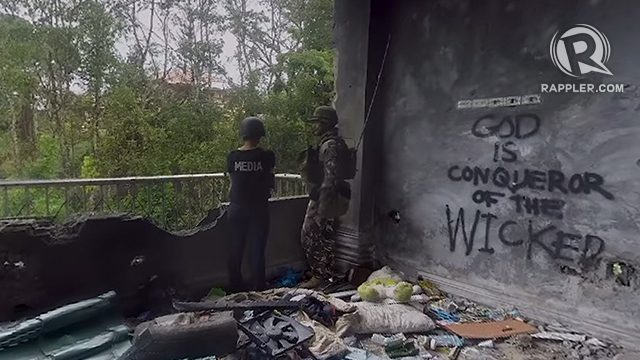 HONG KONG, China – Rappler bagged the top prize for Best Use of Online Video at the Asian Digital Media Awards 2018, for its Virtual Reality (VR) documentary on the Marawi siege.

Rappler was shortlisted for “Marawi in 360,” along with South China Morning Post‘s video on “Extreme Poverty in China,” which won bronze, and Apple Daily Publications‘ “Tree-swallowed House,” also shot in VR, which won silver. Rappler was awarded the gold star on Thursday, November 8, 2018.

The award was shared by Rappler and Group of Five Creative Concepts, Inc. (G5), which provided the VR/360 video content production. Rappler and G5 collaborated to capture the conflict on the ground, and to produce Asia’s first-ever VR war documentary.

“Marawi in 360,” a two-part mini documentary shot completely in VR, was produced by journalists Carmela Fonbuena, Adrian Portugal, Jeff Digma, and Natashya Gutierrez. It captured the war from inside the battle zone, and the devastating impact of the conflict on the people of Marawi.

The same documentary also won the top prize for the Innovation and Bleeding Edge category at the 2018 Boomerang Awards, and was a finalist in this year’s Society of Publishers in Asia (SOPA) Awards for Editorial Excellence for the category “Excellence in Journalistic Innovation.”

The Asian Digital Media Awards 2018, jointly presented by WAN-IFRA and Google, recognizes publishers who have adopted digital media and mobile strategies as part of their total product offering to meet the major changes in how people consume news and information today.

Rappler was the only Philippine news outlet to win an award in this year’s event. – Rappler.com