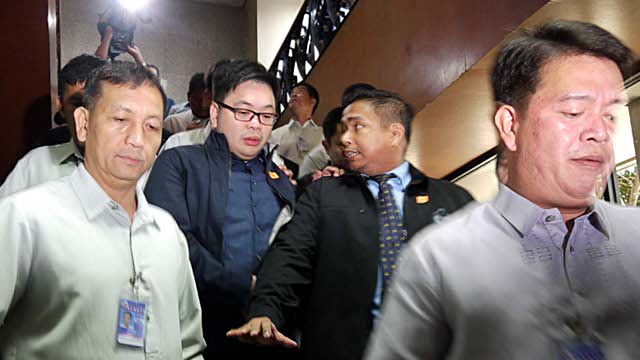 Bangayan was ordered charged for violation of Paragraph 3, Article 186 of the Revised Penal Code (RPC) which penalizes trade monopoly with imprisonment of 6 months to 6 years plus fines.

Bangayan was also indicted for the unlawful use of the alias “David Tan” though the businessman has always denied that he was David Tan.

“The National Bureau of Investigation (NBI) presented a copy of a document in a civil case in which respondent Bangayan was impleaded as a defendant and he did not deny therein that he is also known as ‘David Tan,’” said the resolution dated November 5, signed by Senior Deputy State Prosecutor Miguel F. Gudio Jr.

The complaints were revived at the DOJ during the time of former justice secretary now Senator Leila de Lima. It was the result of a series of hearings at the Senate, where then Davao City mayor and now President Rodrigo Duterte testified against Bangayan.

Duterte was called to the Senate in 2014 as a resource person supposedly because Bangayan also brought his business to Davao City.

Bangayan is accused of “combining with and employing the concerned farmers’ cooperatives and organizations to participate in the bidding of rice importations with the intention of manipulating and increasing the market price of the supply.”

Indicted along with Bangayan for monopoly of trade are Elizabeth Faustino, David and Judilyne Lim, Eleanor Rodriguez, and Leah Echeveria.

The DOJ said witnesses pointed to Bangayan and Faustino as the financiers of cooperatives, with Faustino acting as the broker “so that the concerned entities may be allowed to participate in the bidding for rice procurement.”

“The financial and technical support provided by the respondents to these farmers’ cooperatives, to the extent of undertaking all the processing of the governmental requirements and paying all the necessary expenses, as well as the fact that the cooperatives were required to assign their respective importations only to the respondents, clearly indicate respondents’ intention to use these entities as dummies with the end in view of monopolizing and manipulating the rice supply in the country,” said the DOJ. – Rappler.com