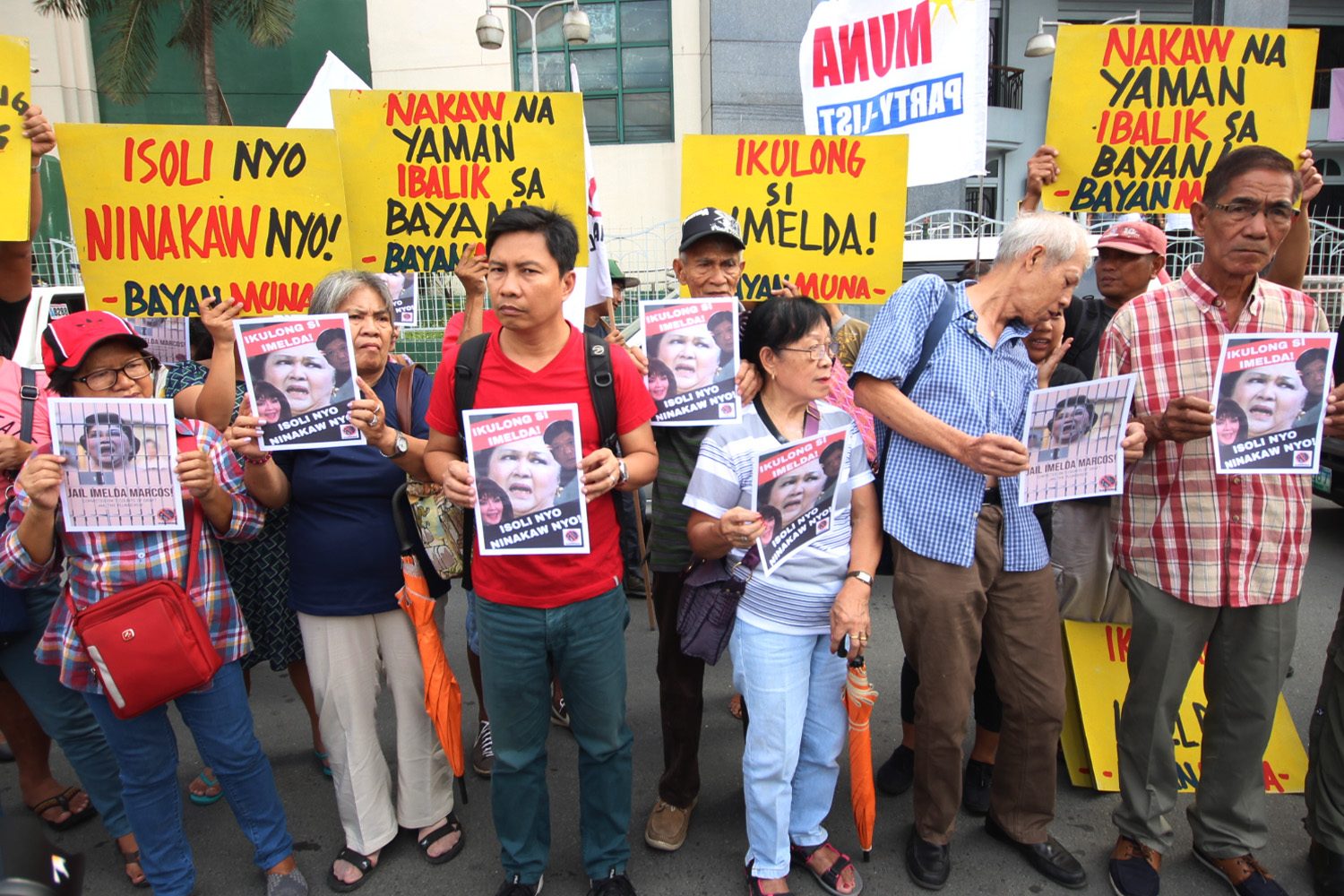 Facebook Twitter Copy URL
Copied
'It is hard to explain why there is a delay in the warrant issuance and, consequently, service,' says law professor and former SC spokesman Ted Te

MANILA, Philippines – The anti-graft court Sandiganbayan on Friday, November 9, convicted Imelda Marcos of 7 counts of graft and ordered the issuance of a warrant of arrest against her.

But the Sandiganbayan closed on Tuesday, November 13, without releasing the actual warrant of arrest, which is the official document that would empower law enforcement authorities to apprehend the former first lady.

“The November 9 order should have resulted in the issuance of a warrant, which was a ministerial act considering the unexplained absence of the accused, despite notice. It is hard to explain why there is a delay in the warrant issuance and, consequently, service,” said Te. 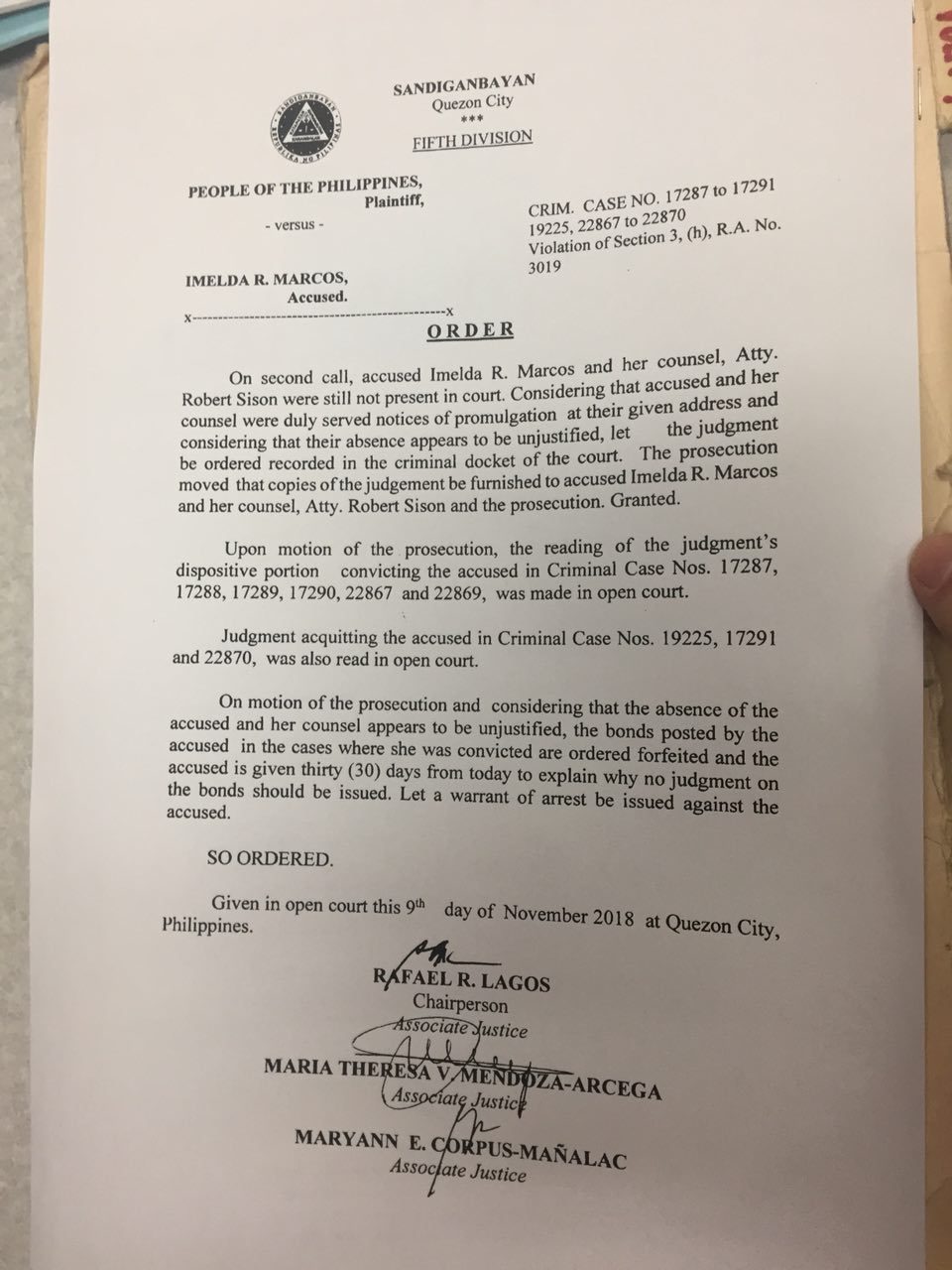 Under Section 5, Rule 114 of the Rules of Court, if a person is convicted for a generally bailable offense like graft, there is the remedy of a post-conviction bail while the person is appealing the judgment.

Ombudsman prosecutors are empowered by the same law to appeal to the Court to not allow bail, citing conditions like whether or not the person is a flight-risk. Asked if they intend to file this appeal, lead prosecutor Rey Quilala told Rappler on Tuesday that they cannot comment yet due to a gag order by Ombudsman Samuel Martires.

Under Section 6, Rule 120, if the judgment is for conviction and the person snubbed the promulgation without justifiable cause, he or she shall lose the available remedies, among them post-conviction bail.

Marcos did not attend the promulgation on Friday morning, yet partied with her daughter Ilocos Norte Governor Imee Marcos on Friday evening.

In the November 9 order, the 5th Division said “the absence of the accused and her counsel appears to be unjustified.”

Because of the absence, Marcos’ bail paid during trial was automatically canceled.

Te said because the bail was canceled, post-conviction bail needs to be applied for.

“Her motion needs to be granted first before any other remedy may be availed of. Until it is granted, bail is denied and the warrant stands,” Te said. (READ: Imee, Bongbong Marcos were beneficiaries of illegal Swiss foundations)

Reporters were told that attached to that motion is the explanation of her absence, as well as a request to hold the issuance of a warrant of arrest.

Te said the mere filing of the motion should not stop the Court from issuing a warrant, especially since there already is an order to release the warrant.

“The judge no longer determines probable cause for a bench warrant because the cause is clear – disobedience to an order, failure to appear despite notice, or direct contempt,” said Te.

The motion is set for hearing 8:30 am on Friday.

If the warrant is issued before Friday, can Marcos be detained while the Court decides whether or not to give her post-conviction bail? “Yes,” said Te.

On Tuesday morning, Martial Law victims trooped to the Sandiganbayan to “demand an arrest warrant” for Marcos.

“While we welcome the guilty verdict against Imelda, justice should come in full circle. Imelda should be arrested and be put behind bars,” said Trinidad Herrera-Repuno, chairperson of Samahan ng Ex-Detainees Laban Sa Detention at Arrest (SELDA).

Marcos was found guilty of illegally creating and maintaining private organizations in Switzerland, where they earned at least US$200 million from interest and investments for the “private benefit” of the former first family. – Rappler.com