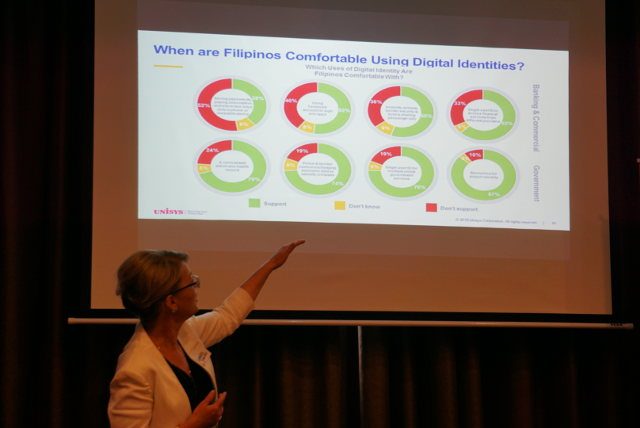 MANILA, Philippines – Filipinos have “high comfort” sharing their digital data with the government even as many expressed concern over possible identity theft, according to 2018 Unisys Security Index.

Filipinos trusted the government more than commercial or financial services in handling their digital data, according to Lysandra Schmutter, Unisys Vice President for Asia Pacific, in a presentation in Manila on Wednesday, November 14. The online survey of 1,000 Filipinos said that up to 87% were willing to share their biometrics in airports to verify their identities, 76% supported a single ID for multiple online government services, and 70% supported the idea of centralizing their electronic health record.

The support for a single ID reflects a Social Weather Stations survey showing support from 77% of the population.

There is also majority support for several uses of their digital data by private firms, although the numbers showed less enthusiasm. This behavior is a global trend, according to Unisys solutions director Ian Selbie.

A majority of 62% support single user ID to access financial services from different providers, 55% support sharing their passenger information to airports and airlines, and 52% support the use of their Facebook accounts to sign into applications. Filipinos showed seemingly contradicting responses to the survey, declaring “high comfort” in sharing digital identities while saying that identity theft (88%) is its biggest security concern. The Philippines proved more comfortable in using digital identities than the other Asia Pacific nations in the survey – Australia, Malaysia, and New Zealand.

The Philippines also recorded the “highest level of concern” over security issues among 13 countries surveyed, scoring 232 out of 300 in the index, Still the Philippine index fell 11 points from 2017.

Schmutter said the contradiction may be driven in part by the need to quickly access services, say, following natural disasters. “Given that Filipinos are also concerned about identity theft and bankcard fraud, biometric identifiers such as fingerprints or facial scans offer an accurate and secure way of authorizing someone’s identity so that they can access the services they need,” she said.

Natural disasters (87%) and credit card fraud (86%) were also big security concerns for Filipinos. Colombia and Mexico are the only other countries that showed high concern over natural disasters.

Unisys is a firm based in New York. It is keen to participate in a consortium bidding for the national ID system. – Rappler.com