Balangiga Bells to make Korea stopover before arriving in PH 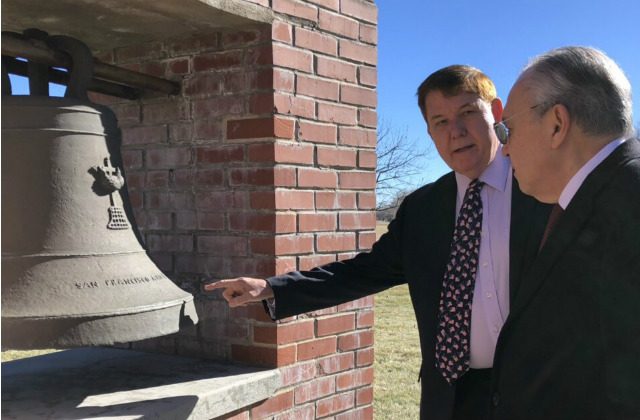 Facebook Twitter Copy URL
Copied
The return of the Balangiga Bells 'brings to a close a part of our history, the Filipino-American War in the 1990s,' says Philippine Ambassador Babe Romualdez

MANILA, Philippines – After the recently concluded turnover ceremony at Wyoming in the US, it will take days or weeks before the historic Balangiga Bells arrive in the Philippines, hopefully before the end of the year.

The two Balangiga Bells at the F.E. Warren Air Force Base in Wyoming will first be brought to Philadelphia to be put “in good order,” then will be sent to South Korea where the third bell of Balangiga is being kept.

“First of all, these bells are going to be obviously shipped to a facility in Philadelphia where they will be able to sort of like put it in good order before most likely shipping it or sending it over to Korea where the other bell is located in one of the US air bases there,” said Philippine Ambassador to the US Jose Manuel “Babe” Romualdez.

“Hopefully before the end of the year, we should expect all 3 bells from Balangiga back in the Philippines,” Romualdez said.

Romualdez made these remarks as US Defense Secretary James Mattis on Wednesday, November 14 (Wyoming time), officially announced the return of the Balangiga Bells to the Philippines.

“This is a very significant event that we have today, not only because these bells represent a long history that the Philippines and the US have had, but it brings to a close a part of our history, the Filipino-American War in the 1990s,” Romualdez said.

The Balangiga Bells were used in 1901 to signal a historic siege where Filipinos outsmarted and killed 48 out of 74 US troops – the US military’s worst single defeat in the Philippines.

In retaliation, American forces killed 2,500 to 10,000 Filipinos (estimates differ depending on the source), as General Jacob H. Smith reportedly vowed to turn Balangiga into a “howling wilderness.” This is now known as the Balangiga Massacre.

On several occasions, President Rodrigo Duterte had demanded the return of the Balangiga Bells, as he lambasted the US for its atrocities when the Philippines was its colony.

In his speech on Wednesday, Mattis said the return of the Balangiga Bells is about “a peace carved out of war.” He said, “It reminds us too that all wars end.” – Rappler.com