‘So which is it?’ court asks Imelda Marcos and lawyer 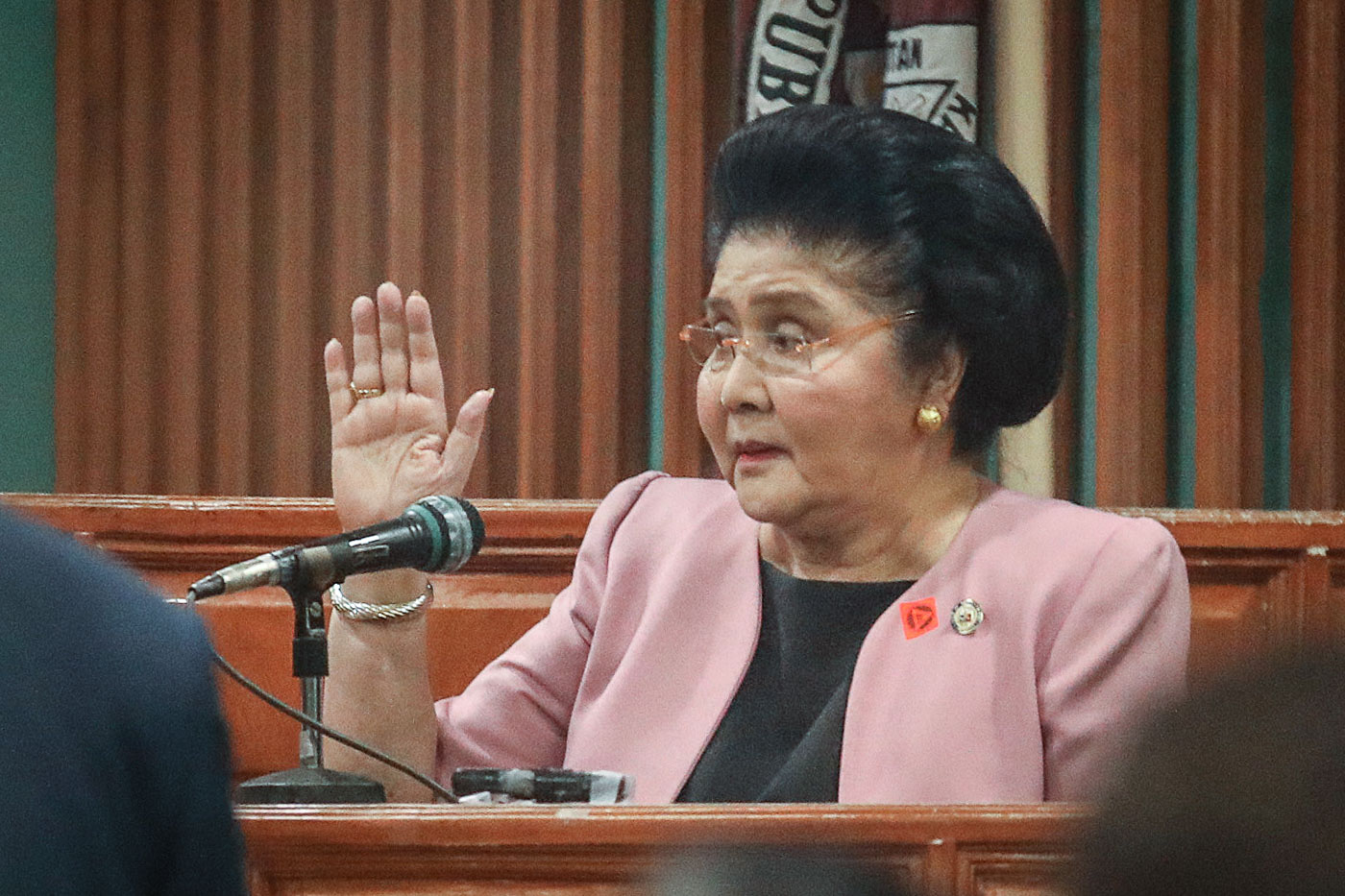 MANILA, Philippines – Ilocos Norte 2nd District Representative Imelda Marcos and her lawyer were grilled on Friday, November 16, for having two different reasons why the former first lady was absent on the day the court issued its verdict.

This is important because under Rule 120 of the Rules of Court, unjustified absence may cost Marcos post-conviction remedies like bail.

Marcos was allowed to post an additional P150,000 bail bond while the 5th Division decides whether or not to grant her post-conviction bail.

Fifth Division Chairman Associate Justice Rafael Lagos pointed out on Friday that Marcos submitted on Thursday afternoon an affidavit saying she did not know of the court schedule.

Marcos said her secretary in charge of communications was on leave, and that the household cook merely put the notice on the secretary’s table, unknown to everybody.

But Lagos pointed out that on Monday, November 12, Marcos’ lawyer Manuel “Nonong” Lazaro filed a pleading which says the absence was “solely” because Marcos was indisposed, that she had been suffering from multiple organ infirmities.

“So which is it?” Lagos asked both Marcos and Lazaro.

Lazaro reasoned out that there were two reasons, but Lagos read the lawyer’s own motion to him saying the absence was “solely because she was indisposed.”

The 89-year-old Marcos, who had difficulty both hearing and speaking, was asked by Lagos if she would have attended if she only knew of the schedule.

“If I knew about it, I would have gone,” Marcos said.

Lagos pressed Marcos, “So what was the real reason?”

Marcos said: “I did not know.”

Lagos also confronted Marcos about her attendance in the birthday party of daughter Ilocos Norte Governor Imee Marcos on the same evening of the promulgation on November 9.

Marcos said she originally didn’t want to go but Imee was “crying” and “begging” for her to attend the birthday party.

Still, Lagos’ order remained the same, such that Marcos will be allowed to have temporary freedom while the court decides whether or not she is entitled to post-conviction bail.

There were delays in her responses, such as when she was asked what her status is, the gallery had to coach her to say “widow.”

When she was asked whether she lives in the San Juan home where Imee held her party or Pacific Plaza which is stated in court records, Marcos said, “Our home was vandalized.”

Lagos dropped the inquiry, and even told Marcos to just say she doesn’t know or she doesn’t recall because “we don’t expect you to remember everything.”

Marcos was accompanied to the court by all her children, Imee, Ferdinand “Bongbong” Jr, and Irene as well as grandson Borgy Manotoc.

On the side of the Office of the Ombudsman, lead prosecutor Rey Quilala did not attend, sending only one prosecutor to speak for the government.

Lagos had to do most of the crucial examination of Marcos in the aspect of the real reason for her absence during promulgation. – Rappler.com