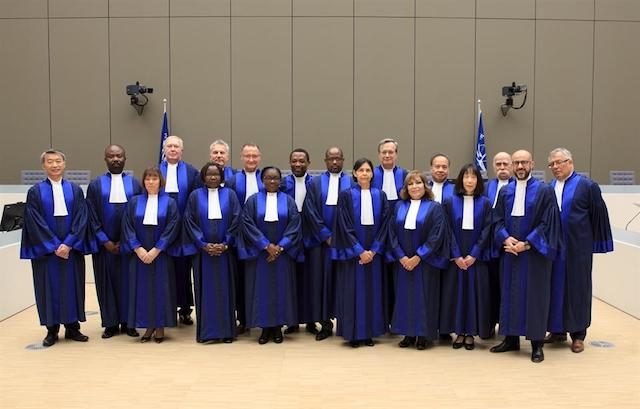 Facebook Twitter Copy URL
Copied
But there are African and Asian judges, including a Filipino, in the International Criminal Court

MANILA, Philippines – Philippine President Rodrigo Duterte lashed out against the International Criminal Court (ICC), this time claiming its judges are all Caucasians and thus are likely pedophiles.

(I said, who are your judges there? Why, were we there when those fools were chosen, those sons of bitches whites? Maybe this one is a pedophile, most of them are.)

Duterte made this claim after insisting he “does not recognize ICC” because it is “a creation of EU (European Union).”

The ICC is currently examining if it has jurisdiction over a complaint filed before it accusing Duterte of crimes against humanity because of his bloody crackdown on illegal drugs. Two complaints have been filed against Duterte with the ICC.

“Why would I allow myself to be tried by a few idiots, human beings of this world? Yung prosecutor niyo, yung putot na itim, taga saan ba iyon?” he said, referring to ICC Prosecutor Fatou Bensouda who hails from Gambia.

(That prosecutor of yours, the short black one, where does she come from?)

One of them is even Filipino, Judge Raul Pangalangan. Judge Antoine Kesia-Mbe Mindua is from the Democratic Republic of the Congo, Judge Chang-ho Chung is from South Korea, Judge Chile Eboi-Osuji is Nigerian.

In fact, the website shows that out of the 20 ICC judges, 10 or half the number of members are non-Caucasian.

Duterte also scoffed that the Philippines has nothing to do with choosing ICC judges.

“Bakit, kasama ba kami pagpili itong mga gago, putang inang puti na ‘yan? (Why, were there when those fools were chosen, those sons of bitches whites?) he had asked.

But the Philippines, having been a state party to the Rome Statute which created the ICC, has been involved in selecting judges. According to ICC rules, state parties have one representative in the Assembly of State Parties. It’s this body that elects ICC judges and prosecutors.

“Then the chairman of the ICC is the sibling of the King of Jordan. He said I need to go to a psychiatrist,” said Duterte in Filipino.

Zeid used to be the United Nations High Commissioner on Human Rights but was never ICC chairman. There is no such position as the ICC’s top officials are its president and prosecutor. Zeid is also the cousin, not the brother, of King Abdullah II of Jordan. – Rappler.com