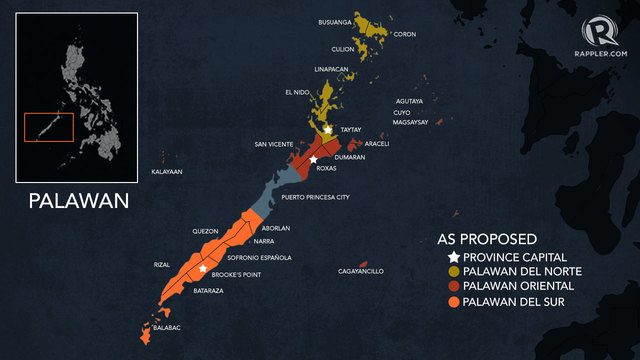 MANILA, Philippines – Palawan, the island closest to the disputed West Philippine Sea, would soon be divided into 3 provinces, after the House and the Senate approved the proposal.

“If we speak of economic potential, Palawan is a powerhouse. Its local growth rate has been clocked at bristling 7 percent per annum for many years now. And this was achieved with a total ban on the exploitation of natural resources over a wide swath of its land,” Angara said.

A plebiscite will be conducted in 2020 so Palawan residents could decide on the matter.

Under congressional rules, local bills such as HB 8055 must first be passed in the House of Representatives before being transmitted to the Senate. The measure was filed by Palawan representatives on March 15, 2018 and was approved on final reading just 5 months after, August 22. The Senate received the bill on August 30 and passed the same in less than 3 months.

The bill would now be transmitted to President Rodrigo Duterte for signature.

The divisions under the proposed measure are as follows:

Palawan del Sur will be the so-called “mother province”

The independent city of Puerto Princesa City would not be part of any of the 3 provinces.

A divided Palawan to benefit China?

Europe-based analyst Anders Corr had warned that the move to split Palawan into 3 provinces would end up benefitting China’s territorial expansion move.

“If China wants a military base on Palawan, mining rights, or fishing rights, after breakup it would have multiple officials with whom it can negotiate or bribe, playing one against the other,” he told Rappler.

Senator Hontiveros and other groups opposed the measure. A divided Palawan, they said, would only strengthen China’s position in the West Philippine Sea.

“Instead of having to face a single, strong provincial government which can mobilize the entire island in its own defense, China will now have the opportunity to infiltrate and influence smaller local government units,” Hontiveros said.

“This is not your business as usual subdivision of political units but one with deep geopolitical repercussions especially since the Province of Palawan is right in the forefront of our West Philippine Sea territory,” she added.

Hontiveros also lamented the lack of genuine consultation in the proposal, citing the letter of Bishop Eduardo Sarabia Juanich of Taytay, Palawan and the petition by the Save Palawan Movement.

“For something as important as what the bill seeks to accomplish, it is my opinion that our committee did not reach out to all affected sectors, particularly the non-government organizations, the religious and the private sector,” she said.

The passage of the measure came a day before Chinese President Xi Jingping’s arrival in Manila for his state visit. – Rappler.com