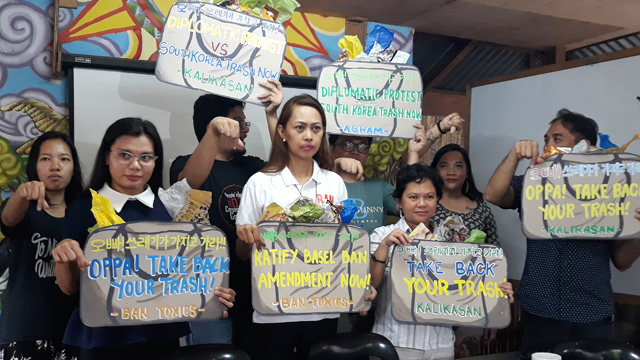 CAGAYAN DE ORO CITY, Philippines – An advocacy group based in this city asked the Bureau of Customs and the Environment Management Bureau to file strong cases against the importers of trash from South Korea which ended up in a warehouse here.

Pinoy Aksyon on Governance and the Environment (Pinoy Aksyon) said the latest “imported garbage” issue will test how serious is the resolve of Customs to end this practice.

Pinoy Aksyon’s concerns is now part of the howl of protest raised by various pro-environment groups, which recalled that the garbage from Canada shipped to Manila back in 2013 remained unresolved.

A statement from the Kalikasan-People’s Network for the Environment (Kalikasan-PNE) said that in “June 2018, a cargo ship full of mixed waste arrived at the Mindanao International Container Terminal in Tagaloan, Misamis Oriental. It was consigned to a Korean company, Verde Soko II Philippine Industrial Corporation.”

Bency Ellorin, chairperon of Pinoy Aksyon, said the “correct actions of the BOC on the Korean trash that ended up in Tagoloan, Misamis Oriental could regain people’s trust in the agency.” He added, that the same goes with the Environmental Management Bureau of the DENR.

Ellorin said his group could not believe the alibi of Verde Soko, that they have actually imported raw materials. “Even grade schoolers would understand that in manufacturing, you only import raw materials that are not available in the domestic market.” he said.

Verde Soko declared the cargo shipped to Misamis Oriental as synthetic plastic flakes. However, the DENR found out it was full of assorted wastes such as batteries, electric equipment, and used diapers and dextrose, all of which are deemed hazardous to health.

Shredded, laminated plastics, which Verde Soko claimed their imported raw materials to manufacture plastic pellets, are abundant in the country. The solid waste management law (RA 9003) or mandates the recycling of these materials usually used as sachets of shampoo and an array of instant drinks.

“Obviously, the plastic flakes, were just use as front of the blatantly illegal importation of toxic waste which is prohibited by Philippine laws and the Basel Convention,” Ellorin added.

Greenpeace Philippines also joined the protests. Its campaigner Abigail Aguilar, said: “This is reminiscent of the Canada waste dumping case, which happened five years ago, and we say that we have enough. No amount of profit will justify the amount of garbage we receive from rich countries, be it from Canada or South Korea.”