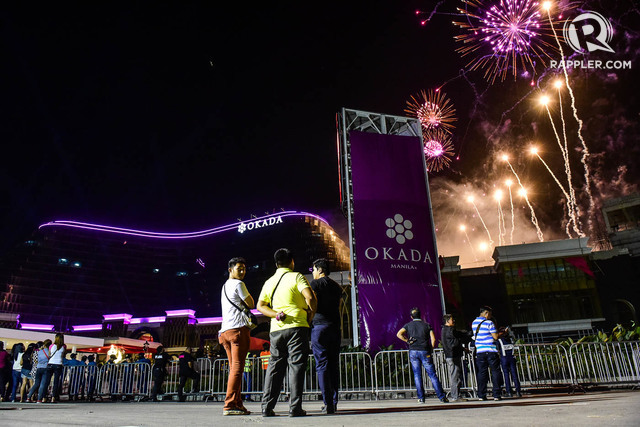 MANILA, Philippines (UPDATED) – President Rodrigo Duterte warned police not to enter Okada Manila, a casino in Parañaque City, warning he would even send soldiers to patrol the area.

“‘Yung Okada diyan, putang ina niyan. I’d like to announce lahat kayong pulis umalis kayo diyan (That motherfucking Okada. I’d like to announce, all you police, get out of there). It’s crawling with usurers, kidnappers,” he said on Thursday, November 22, at the launch of the Cavite Gateway Terminal.

Duterte said he does not want to see even a police car near Okada Manila, describing the casino-resort as a place that attracts “the lowlife in society.”

Police who disobey his order will be dismissed, he added, believing that the only reason a policeman would be in the casino if they were not assigned to provide security is to commit a crime.

He may even call the elite Scout Rangers to patrol the “entire Dewey Boulevard,” using the old name of Roxas Boulevard, a famous avenue near Entertainment City, where Okada Manila is located.

“If I lose my patience I will call the Rangers. You patrol there, from Fort Magsaysay. You choose. Either the military will do the patrolling there or you go out of the place there,” he said in a mix of English and Filipino.

“I do not want to see any law enforcement guy there either in uniform or civilian clothes,” he added.

“Management will cooperate and coordinate with the proper authorities to address this matter. The safety and welfare of our guests will always be our utmost priority,” the casino added.

In earlier speeches, Duterte said many cases of kidnapping and other crimes have been reported in Okada Manila or that area.

Syndicates, he said, would kidnap persons from their rooms in Okada, which has a hotel, and supposedly kill them even when ransom has been paid.

Previously, Duterte said the government would no longer approve licenses for new casinos, declaring he hates gambling as it attracts many crimes.

Not even a month into his presidency, Duterte had a meeting with then-Okada Manila owner Kazuo Okada of Tiger Resort Leisure & Entertainment Incorporated in Manila.

The courtesy call by Okada happened on July 18, 2016, and was attended by Antonio “Tonyboy” Cojuangco, Okada’s local partner. – Rappler.com