Nov 23, 2018 9:54 PM PHT
Mara Cepeda
Facebook Twitter Copy URL
Copied
Opposition members condemn the slow pace of justice for the victims of what remains to be the deadliest attack on journalists in the world 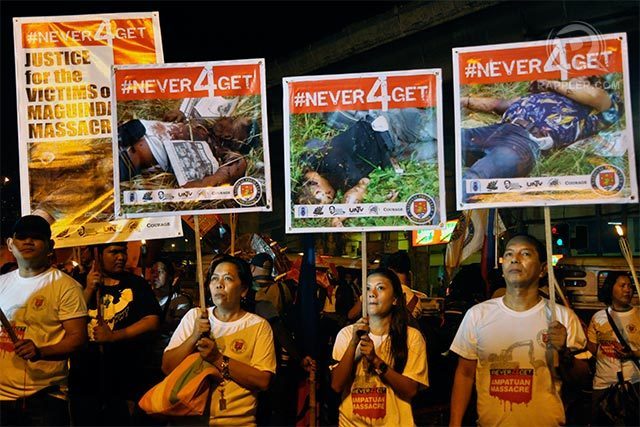 MANILA, Philippines – Members of the opposition decried the slow pace of justice for the victims of the gruesome Maguindanao massacre, with the trial going on for 9 years without a single conviction.

Marawi civic leader Samira Gutoc said on Friday, November 23, that 9 years without justice is simply too long, especially for the families left behind by 58 victims, 32 of whom were journalists. (READ: Mother of Maguindanao massacre victim will not back down)

“Ibang klaseng pa-siyam ito. Taon ang binilang (This is a different kind of funeral. It’s taking years). Nine years is twice as long as World War II in the country. We have come to a point in our history that it takes a longer time to convict a dozen than drive out a million invaders,” said the senatorial aspirant from the Oposisyon Koalisyon.

“That the case is moving at glacial pace is an indictment of our justice system as well. It seems that the wheels of justice are not moving slow but has completely stopped,” she added.

Human rights lawyer Chel Diokno, another senatorial bet of the opposition, said the public should never forget “this blatant display of impunity.”

“When time passes, the horror, outrage, and even the pain can become a fading memory. On the 9th year of the gruesome massacre of 58 Filipino journalists — the worst election-related killing in our history — we must never forget this blatant display of impunity,” said Diokno.

“The murder trial must be concluded as soon as possible. Bigyan natin ng katarungan ang mga Pilipino. ‘Pag may sala, may parusa, mayaman man o mahirap (Let’s give justice to Filipinos. If a crime is committed, he should be punishment, regardless of whether he is rich or poor),” he added.

The massacre is considered the deadliest attack on journalists in the world and the worst election-related case of violence in Philippine history.

Of the 58 people who died, 32 were journalists who joined the convoy of then-Buluan vice mayor Esmael “Toto” Mangudadatu when he filed his candidacy for governor against Andal Ampatuan Jr, a member of the powerful Ampatuan clan. The convoy was attacked on their way to the Comelec office.

Justice Secretary Menardo Guevarra said on Friday – the 9th anniversary of the massacre – that the trial of alleged Maguindanao massacre mastermind, Datu Andal Ampatuan Jr, “has now reached the endgame.”

Senator Francis Pangilinan said Filipinos can only count the years that have gone by since the bloody massacre, “but we have nothing to reckon as victory.”

He said the slow judicial process is only aggravated by the culture of impunity under the administration of President Rodrigo Duterte, who is waging a bloody war against drugs and whose government has launched a systematic attack against the free press.

“To make matters worse, we have an administration that does not acknowledge deaths due to extrajudicial killings but instead thrive on fake news and misinformation to get back at its critics. We see altered and controlled public disclosure to suit the purpose of the ruling power,” said Pangilinan, who is Liberal Party president.

“Under this situation, freedom of the press and the people’s right to know are restricted. The cases of killings, death threats, surveillance of media agencies and journalists, libel, online harassment, website attacks, revoked registration or denied franchise renewal, and verbal abuse have made the practice of journalism even more perilous,” he added.

The Foreign Correspondents Association of the Philippines (FOCAP) is calling on the government to speed up the trial of those charged in the Ampatuan massacre.

“The Ampatuan Massacre was the single, deadliest attack in the world against journalists in recent years… They were on their way to cover an electoral event. They were killed for simply doing their job,” said the FOCAP Board.

The foreign correspondents then urged the Duterte administration to publicly denounce the attacks against Filipino journalists.