PH to ‘validate’ if shooing away PH media is China policy 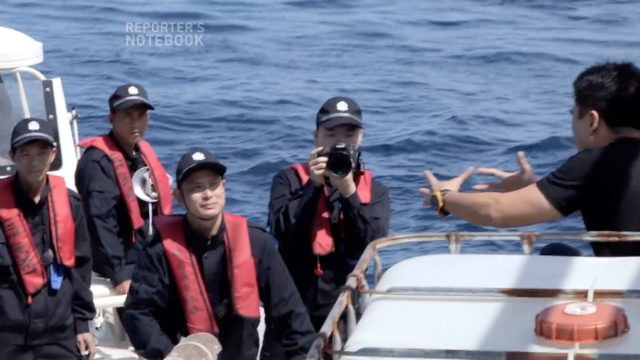 MANILA, Philippines – After a GMA-7 news team was barred from Panatag (Scarborough) Shoal in early November, Malacañang will clarify with the Chinese government if prohibiting Philippine media from entering the area is part of its policy.

“First, we have to validate what happened there…I said, is it the policy of China to prohibit media men from going there or not? We don’t know that yet,” said Presidential Spokesman and Chief Presidential Legal Counsel Salvador Panelo on Monday, November 26, at a Palace news briefing.

Video released by GMA-7 showed personnel of the Chinese Coast Guard, an agency under the Chinese government, telling the news team: “Without the permission of China, you cannot carry out the interview here.”

Asked if the incident was a violation of Philippine rights, given that Panatag Shoal is within the country’s exclusive economic zone, Panelo said, “We don’t know it yet. Maybe it was just the (Chinese) Coast Guard making their own threats.”

Panelo said he texted Chinese Ambassador Zhao Jianhua about the incident. The envoy supposedly referred him to existing processes where the Philippine government, through the Department of Foreign Affairs (DFA), files a formal communication to the Chinese government.

“We have to make formal communication also after we receive also the formal complaint, but we haven’t received anything yet (from GMA-7),” said Panelo.

Duterte’s spokesman said that if shooing away Philippine media is indeed China’s policy then the Philippines should seek a dialogue with China, for instance through the ASEAN-China dialogue mechanism, which the Philippines currently coordinates.

“That’s precisely why we have this so-called mechanism for negotiation,” he said.

The incident would be investigated by the DFA but Panelo urged GMA-7 to file a formal complaint that could serve as the basis for the government probe and the DFA’s letter to China.

Malacañang gave assurances that the Philippines finds “objectionable” any act that violates the country’s rights.

“Anything that is violative of our rights as a nation, anything that violates the rights of our citizens, we will always find it objectionable,” he said.

A day before Malacañang’s careful statements, Vice President Leni Robredo had slammed the actions of the Chinese Coast Guard, saying that Filipinos have exclusive rights to Panatag Shoal.

She also criticized Duterte and his spokesmen for making “irresponsible comments” that, she said, are “tantamount to selling our sovereignty.” – Rappler.com