De Lima to CA: Stop convicts from testifying against me in drug case 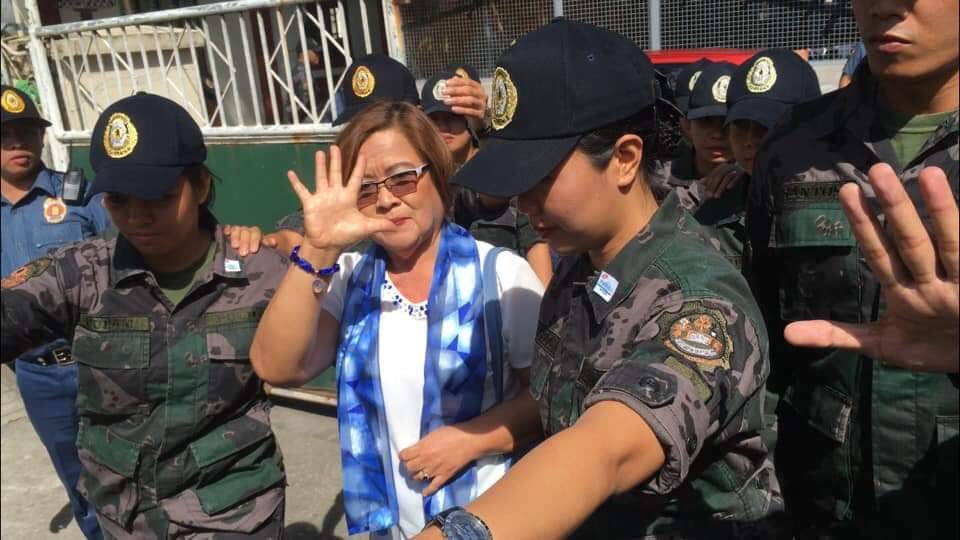 MANILA, Philippines (UPDATED – Reverse a ruling that denied her plea to disqualify 13 convict-witnesses from testifying against her in connection with illegal drug trading charges filed by the justice department. This was what detained Senator Leila de Lima asked the Court of Appeals (CA) last week.

De Lima asserted in a 26-page petition for certiorari and prohibition that Judge Lorna Navarro-Domingo of Muntinlupa Regional Trial Court Branch 206 committed grave abuse of discretion amounting to lack or excess in jurisdiction when she denied her plea to disqualify the convicts.

Citing the Witness Protection, Security and Benefit Act and the Rules of Court, De Lima said the 13 convicted criminals should be disqualified from becoming state witnesses. Criminal conviction, she argued, should be basis for disqualification as a witness.

De Lima called the CA’s attention to a loophole in the Department of Justice or DOJ’s justification for the convicts being valid witnesses.

De Lima said that while Justice Secretary Menardo Guevarra claims the convicts are technically not state witnesses, it was the DOJ’s own indictment which identified the convicts as such.

She wants the CA to issue a temporary restraining order (TRO) on the order of Judge Navarro-Domingo to allow convicts as witnesses. Domingo inhibited from the case after issuing the order.

No less than the High Court itself had previously ruled that allowing criminals guilty of crimes involving moral turpitude to become state witnesses is both arbitrary and a gross violation of the Rules of Court.

The drug convicts who have been scheduled by Branch 206 to start testifying against the senator were convicted of crimes involving drugs, murder, homicide, kidnapping, and robbery – crimes that De Lima pointed out, involve moral turpitude.

But Guevarra had said Section 10 of the Witness Protection Program (WPP) law would not apply to convicts because they are not state witnesses as defined by Section 17, Rule 119 of the Rules of Court. Rule 119 defines a state witness as someone “charged with the commission of any offense.” The convicts were never charged by the DOJ in the De Lima drug charges.

The DOJ under Vitaliano Aguirre II dropped the convicts from the indictment “since they will be utilized as prosecution witnesses.”

Therefore, Guevarra said, the convicts are not state witnesses and the WPP law would not apply.

In her petition, however, De Lima pointed out that when the DOJ cleared the convicts from the indictment, they used the WPP law as their legal basis.

To justify the dismissal of the complaints against the convicts, the DOJ called them state witnesses who, by law, would be entitled to “immunity from criminal prosecution,” De Lima said.

“They cannot now abandon the legal basis they used to exclude from the Information the criminal convicts who already confessed to participating in illegal drug trading in the New Bilibid Prison (NBP),” the senator argued.

Citing Rule 119, Judge Domingo upheld the DOJ’s justification in an order on September 24.

De Lima, however, reiterated that the DOJ cannot be allowed to rely only on Rule 119, when it was them which used the WPP law in the first place.

But by approving the DOJ’s argument, De Lima said Judge Domingo had sanctioned an illegal act.

“Respondent Judge had no option but to apply the law. In a whimsical, capricious, despotic and arbitrary manner, she did not, thus committing grave abuse of discretion, amounting to lack or excess of jurisdiction,” De Lima said.

De Lima earlier went to the Ombudsman to file a complaint against Aguirre and Guevarra for using convicts as state witnesses in the drug case against her.

In her complaint, De Lima said both men violated the WPP and the anti-graft law.

If the Muntinlupa RTC were to proceed with the testimonies of the convicts, hearings will be held inside Bilibid or Camp Aguinaldo – where some convicts were transferred for security.

Reporters will finally be allowed to cover these hearings after the Supreme Court allowed access. – Rappler.com