PH gov’t to operate under reenacted budget until Feb 2019 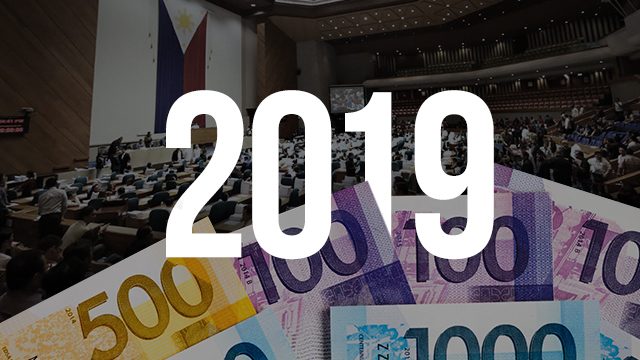 MANILA, Philippines – It’s final: the government will be operating under a reenacted budget until at least the first week of February 2019.

This was approved on Monday, November 26, in an all-senators caucus.

The House was behind schedule in approving the 2019 General Appropriations Bill or the proposed budget for next year. The chamber approved it on second reading on October 3 but passed the bill on final reading only on November 20.

Some senators earlier blamed congressmen for the delay, citing their supposed insertions of pork barrel.

The Senate received the budget bill on Monday, but it would not be able to scrutinize it due to lack of time.

Congress is set to adjourn on December 15 and resume session on January 14.

The Senate expects the approval of the budget on second and 3rd reading by January 16.

The bicameral conference committee, which will reconcile the two versions of the bill versions, is set to convene between January 10 and 23, with the target ratification of the bicam report on January 29.

Last week, Zubiri said the reenacted budget would be in effect only until January 2019, but the schedule apparently moved after discussions in the caucus.

President Rodrigo Duterte is expected to sign the 2019 budget on February 7.

Next year, an election year, will be the first time since 2010 that the government will operate under a reenacted appropriation.

The last years of then-president and now House Speaker Gloria Arroyo were marked with national budgets that were not passed on time or by yearend. – Rappler.com