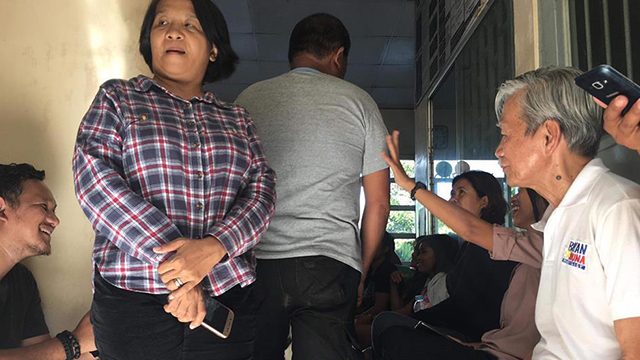 In a statement on Thursday, the progressive Makabayan bloc said it “condemns in the strongest possible terms the illegal detention and trumped up charges” against Ocampo, Castro, and the other delegates of the National Solidarity Mission (NSM) to Talaingod, Davao del Norte.

Makabayan said the group, which includes 29 students and 12 teachers from Lumad schools in the province, had been detained at the Talaingod Police Station since 9:30 pm on Wednesday, November 28. They said the vehicles of the NSM delegates were “boxed in” by two military trucks.

Makabayan alleged that the Talaingod police fabricated “human trafficking in relation to child abuse law” charges against Ocampo, Castro, and the rest of the NSM delegates.

“It would be a blatant and outrageous lie to accuse progressive lawmaker and former public school teacher Castro, former solon, and peace advocate Ocampo, as well as the administrators of the Lumad school as child traffickers,” said Makabayan.

They said the NSM team only wanted to provide food packs and medical services to students and teachers who continue to face threats as well as the eventual “forcible closure” of their schools by the paramilitary group Alamara under the 56th Infantry Battalion (IB) of the Philippine Army.

Makabayan alleged that the 56thIB had imposed a food blockade against the Lumad for over a week now.

Prior to the arrests, Makabayan said unidentified perpetrators allegedly threw nail spikes on the road to deflate the wheels of two out of the 5 vans used by Ocampo’s group. As the wheels were being replaced, broken glass shards were thrown at one van, while the vehicle of Castro and Ocampo were hit by stones.

Makabayan called on the Philippine National Police in Talaingod to drop the charges against Ocampo, Castro, and the other delegates.

“We demand for the whole delegation’s immediate and unconditional release.  The 56th IB and its paramilitary group Alamara must be held accountable for all their human rights violations committed against the Manobo community and the schools’ forcible closure,” said Makabayan.

“We call on every member of the House of Representatives to take action and condemn this illegal act committed against their colleagues,” they added.

The arrest comes nearly 4 months after the PNP mounted a manhunt for Ocampo and fellow former leftist lawmakers Teddy Casino, Rafael Mariano, and Liza Maza, in connection with a case filed 12 years ago, when they were charged with conspiring to kill two people in 2003 and 2004.

A Nueva Ecija court  dismissed the murder charges in August.