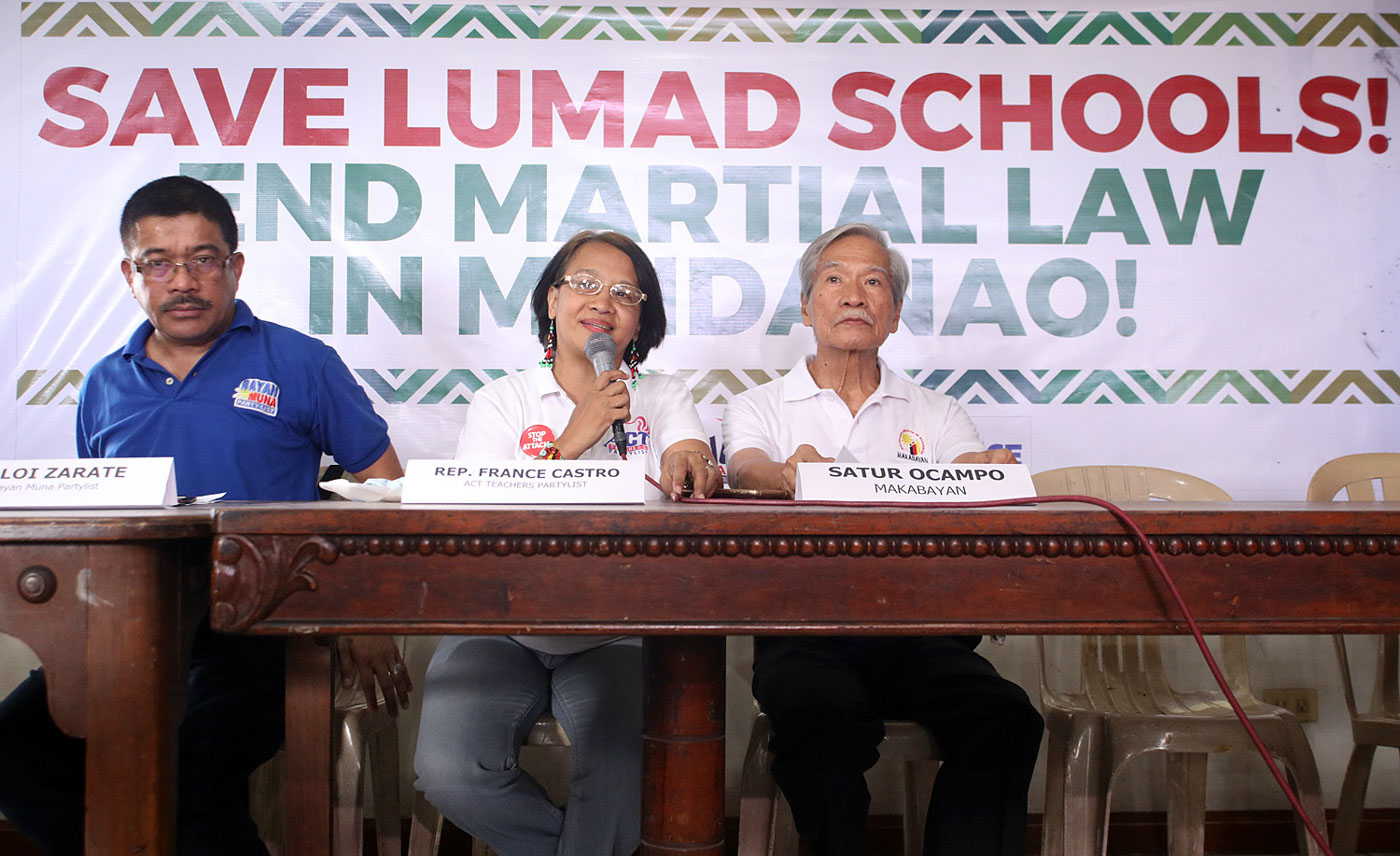 In a press conference on Sunday, December 2, Bayan Muna Representative Carlos Zarate said Ocampo, Castro, and 16 others in their group were in Talaingod, Davao del Norte, as a “response to a humanitarian crisis” involving Lumad schools. The group was part of the National Solidarity Mission.

(That is the reason why Ka Satur and I were there: to respond to the food blockade by the military and to the harassment happening to schools and students. The teachers we rescued told us they were forced to leave their schools due to extreme threats.)

Armed Forces of the Philippines spokesperson Edgard Arevalo questioned the timing of the rescue, citing statements from supposed members of indigenous peoples in the area.

(What rescue are they talking about when there’s no war in the mountains? Second, how can they say they were rescuing the children they took without permission from the parents? What triggered the more intensified checkpoint operation were the reports from the parents that they didn’t know where their children were.)

Castro said there was no need for parental permission because the parents of Salugpongan Ta’Tanu Igkanogon Community Learning Center students supposedly already gave consent at the start of the school year. She also said the parents who supposedly reported them only came in the morning following the arrest.

Castro added that the minors were to be brought to the Salugpongan Learning Center in Tagum City.

(That is a boarding school. At the start of the school year, the parents already signed something…. Parental consent was given to the teachers. It was an emergency rescue operation, so we did not have the time.)

(We are not violating anything. I hope the schools’ operations are restored and that the attacks be stopped because there are 58 schools that were ordered closed without any reason.)

For his part, Ocampo recalled calling President Rodrigo Duterte’s former top aide Bong Go for help but to no avail.

(I called Bong Go and told him what happened: “It seems we have a deadlock here. It would not be good for the children if we go ahead without anything being resolved.” I let him talk to the deputy chief. We were forced to go to the police station so the children could rest.)

(The next day when we were arrested, Bong Go was no longer answering calls and text messages. He was supposedly in Davao at that time.)

(Old story…. I’m challenging you, Albayalde, to visit a Lumad school. Observe and see how good the students are. You also walk for 2 or 3 hours. Is that okay with Albayalde? That’s a challenge.)

Zarate said the group would be filing cases against authorities for harassing them and violating their rights.

The activists were arrested on Thursday, November 29, at a checkpoint in Talaingod town after 14 minors were found in their convoy.

Police filed charges – human trafficking in relation to kidnapping, child abuse, and failure to return a minor – against Ocampo’s group.

On Saturday, December 1, Executive Judge Arlene Palabrica of the 11th Judicial Region ordered their release after they each posted an P80,000 bond. – Rappler.com