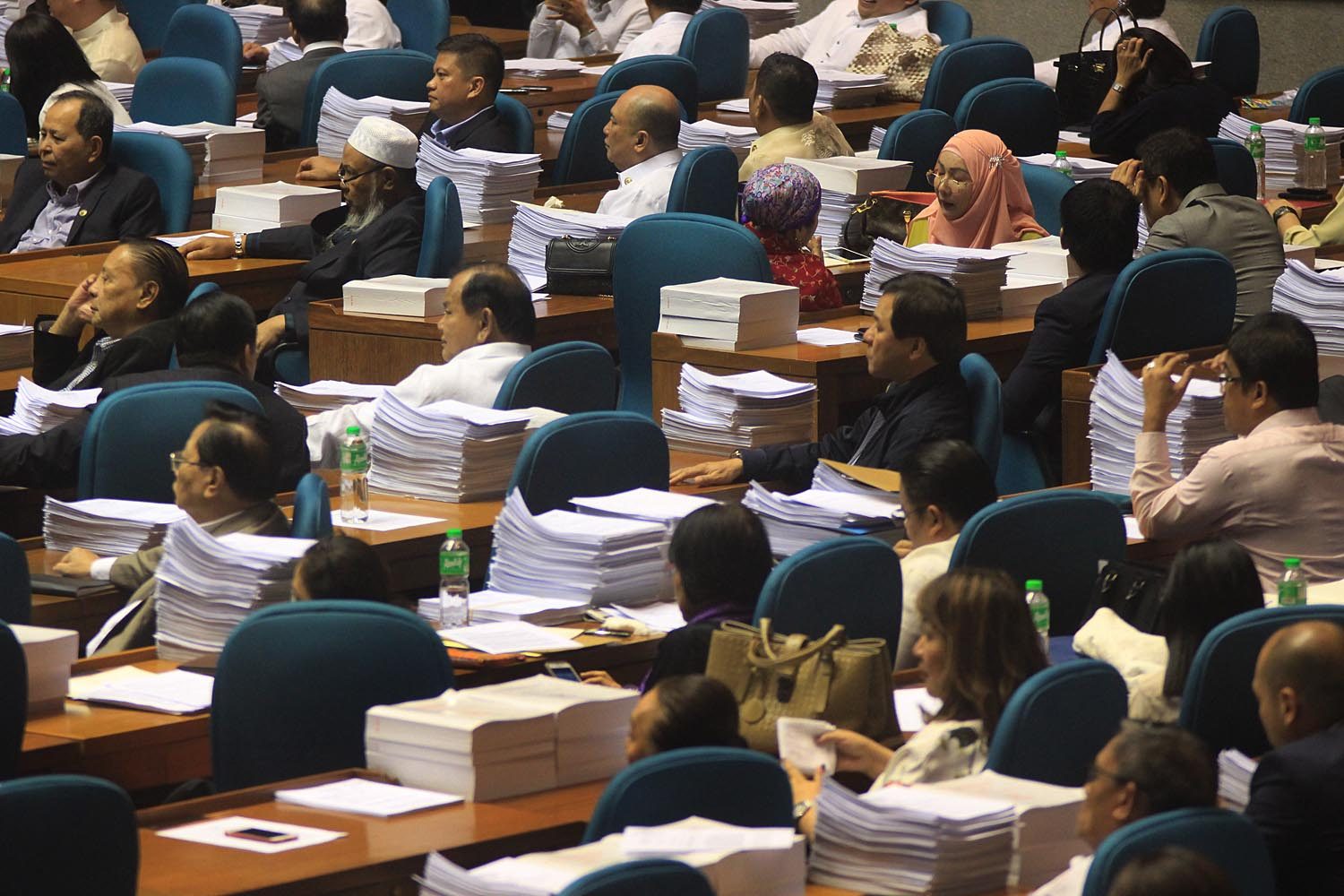 MANILA, Philippines – Efforts to amend the 1987 Constitution are moving fast at the House of Representatives, with plenary debates terminated for Resolution of Both Houses (RBH) 15 late Wednesday night, December 3.

What is RBH 15? Penned by no less than Speaker Gloria Macapagal Arroyo and 35 other legislators, RBH 15 contains the House’s proposed draft constitution that would shift the country to federalism. (READ: Highlights of the House’s draft federal constitution)

RBH has been drawing flak for its controversial provisions, including the removal of the anti-dynasty provision, lifting term limits for Congress members, the return of the two-party system, and requiring elected officials to have college degrees. (READ: No set number of federal states under Arroyo’s draft constitution)

The Vice President was initially removed in the line of succession during the shift to federalism. RBH 15 previously placed the Senate President next in line should the President be unable to perform his or her duties.

After criticisms, Arroyo ordered the House committee on constitutional amendments to put the Vice President back in the succession line.

How did the House end the debates? During the session, Senior Deputy Majority Leader Rodante Marcoleta started by saying that House records showed there had been 3 speeches in favor of, and more than two speeches against, RBH 15.

Marcoleta was stating provisions of Section 54 of the House rules, which says plenary debates may be closed after 3 speeches in favor of a measure and two against, or after one speech in favor of a bill and none against were already delivered at the plenary.

Sensing the looming end to the debates, Alliance of Concerned Teachers Representative Antonio Tinio started calling the attention of Deputy Speaker Raneo Abu, who was presiding over the session.

Tinio’s voice was overpowering the remarks of Marcoleta, who still moved to close the period of debates.

Abu ignored Tinio and told Marcoleta to proceed, with the latter insisting on his motion.

Tinio did not give up, once again raising his motion to adjourn. Abu then put Tinio’s motion up for viva voce voting or a vote of ayes and nays. Tinio lost.

“The motion, Mister Speaker, is only to close the debate,” Marcoleta reiterated.

Despite Tinio’s continued opposition, Abu ruled, “Any objection? The chair hears none. Motion is approved.”

Marcoleta then immediately moved to suspend session until Tuesday, December 4, at 3 pm.

Why this matters: Charter change efforts at the House had been cranked up because Arroyo herself had said she wanted the House to concentrate on the passage of RBH 15 this week.

“Of course, we know that there will still be many steps. But the thing is, we will bring it as far as we can bring it in the hope that the next Congress can continue the work,” Arroyo said in an interview in Porac, Pampanga, on November 29.

Prior to the Wednesday session, the period of interpellation for RBH 15 lasted for only 3 session days – November 21 or the day of its sponsorship for 2nd reading, November 26, and November 27.

This is quite fast, by House standards. During the time of ousted speaker Pantaleon Alvarez, plenary debates for the bill reimposing the death penalty lasted for 7 days, which critics said was still a short time for such a controversial bill.

Veloso first sponsored RBH 15 at the plenary on October 10, but it was immediately recommitted back to his panel to fulfill Arroyo’s order to bring back the Vice President in the line of succession.

Veloso previously told Rappler that Arroyo’s marching orders was for the House to pass RBH 15 on 3rd and final reading during the first quarter of 2019.  Ranking senators, however, already said the House’s draft constitution will be “dead on arrival” at the Senate.

The 17th Congress is set to close session for the holidays on December 12 and will resume session on January 14, 2019. – Rappler.com