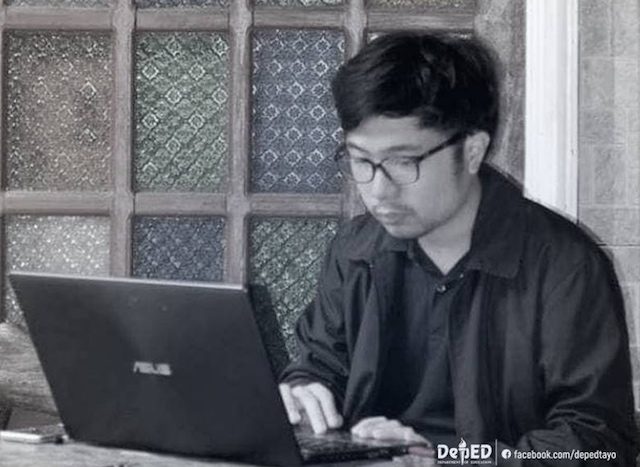 Facebook Twitter Copy URL
Copied
(UPDATED) Francis de Leon, known to his former co-workers at the Department of Education as 'an example and inspiration to reformists in government,' was killed just a few blocks from his home in Marikina

MANILA, Philippines (UPDATED) – Marikina Mayor Marcelino Teodoro has offered a P500,000-reward for information that would lead to the arrest of the killer of Ateneo de Manila University (ADMU) graduate student Francis de Leon.

Teodoro offered the reward 3 days after the 23-year-old De Leon was found dead with stab wounds just minutes away from his home in Barangay Concepcion, Marikina City.

Senior Superintendent Roger Quesada, Marikina police chief, is eyeing robbery as the possible motive for the killing since De Leon’s mobile phone was missing, though his laptop was left behind.

Before he began pursuing his graduate studies at ADMU, De Leon worked at the Disaster Management Group of the Department of Education’s Central Office.

DepEd strongly condemned the killing and expressed its condolences to the family of De Leon, who worked with the department for over a year.

“The Department of Education (DepEd) strongly condemns the brutal slay of Francis de Leon, a former staff of the Disaster Risk Reduction and Management Service (DRRMS),” DepEd said in a statement on Wednesday, December 5.

“DepEd deplores the tragic loss of such a young life and earnestly seeks that the long arm of the law will immediately lead to the arrest of the perpetrator/s,” it added.

DepEd Tayo in its Facebook page described him as “an example and inspiration to reformists in government.”

“He is fondly remembered and sorely missed not only by those he worked for and with in the DepEd’s Disaster Risk Reduction and Management Service, but also the countless others whose lives he touched and protected”  according to the statement on the page managed by some DepEd workers. – Rappler.com