Davao City, PHILIPPINES – Three years after the brutal murder of a communist rebel leader’s daughter, city councilors here are pushing for the approval of a local ordinance to support victims of human rights violations and their families.

Rebelyn Pitao, a 20-year old teacher at St. Peter’s College in Davao City, was on her way home, in a tricycle, on March 4, 2009 when armed men attacked her. The next day, she was found dead in an irrigation dike in Carmen, Davao del Norte, with 5 puncture wounds and traces of sexual abuse.

Her mother, Evangeline Pitao, said that Rebelyn was not involved in any political organizations, adding that the only reason she was killed was that she was a daughter of Leoncio “Ka Parago” Pitao, commander of the Pulang Bagani Command of the New People’s Army operating in the Davao region.

The killing has not been solved.

Davao City Councilor Karlo Bello is currently pushing for the approval of a city human rights ordinance, which was titled the Rebelyn Code.

“The Rebelyn Code is a support system that will provide direct assistance to the victims of human rights violations and their families including legal support and psycho-social interventions. Majority of the victims coming to us for help have also difficulty in going back to their homes fearing that they will be accosted there. That is why we will also provide sanctuary for the victims and give them board and lodging,” said Bello.

The ordinance also seeks the creation of a monitoring team composed of private and public organizations, to keep an eye on human rights violations particularly in conflict areas. 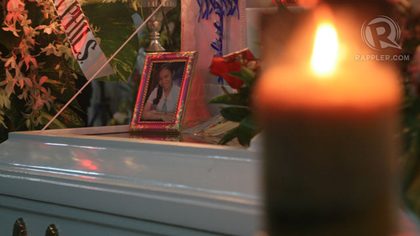 “Hopefully, the Rebelyn Code will give the local government of Davao an active role in the cases of human rights violations, most especially in taking a legal action against those who are responsible for the crimes,” said Bello.

Bello gave assurances that the Rebelyn Code would not duplicate the functions of the Commission on Human Rights (CHR) and other human rights agencies.

“In fact, this will compliment the functions of the City Legal Office and the CHR,” Bello said.

Evangeline Pitao said that she is thankful for Bello and Davao City councilor Leah Librado for their support.

“We are also calling on the other city councilors, and most especially to Mayor Sara Duterte and Vice Mayor Rodrigo Duterte, to support and give their approval to the Rebelyn Code,” Pitao said.

The military has denied involvement in Pitao’s killing. – Rappler.com