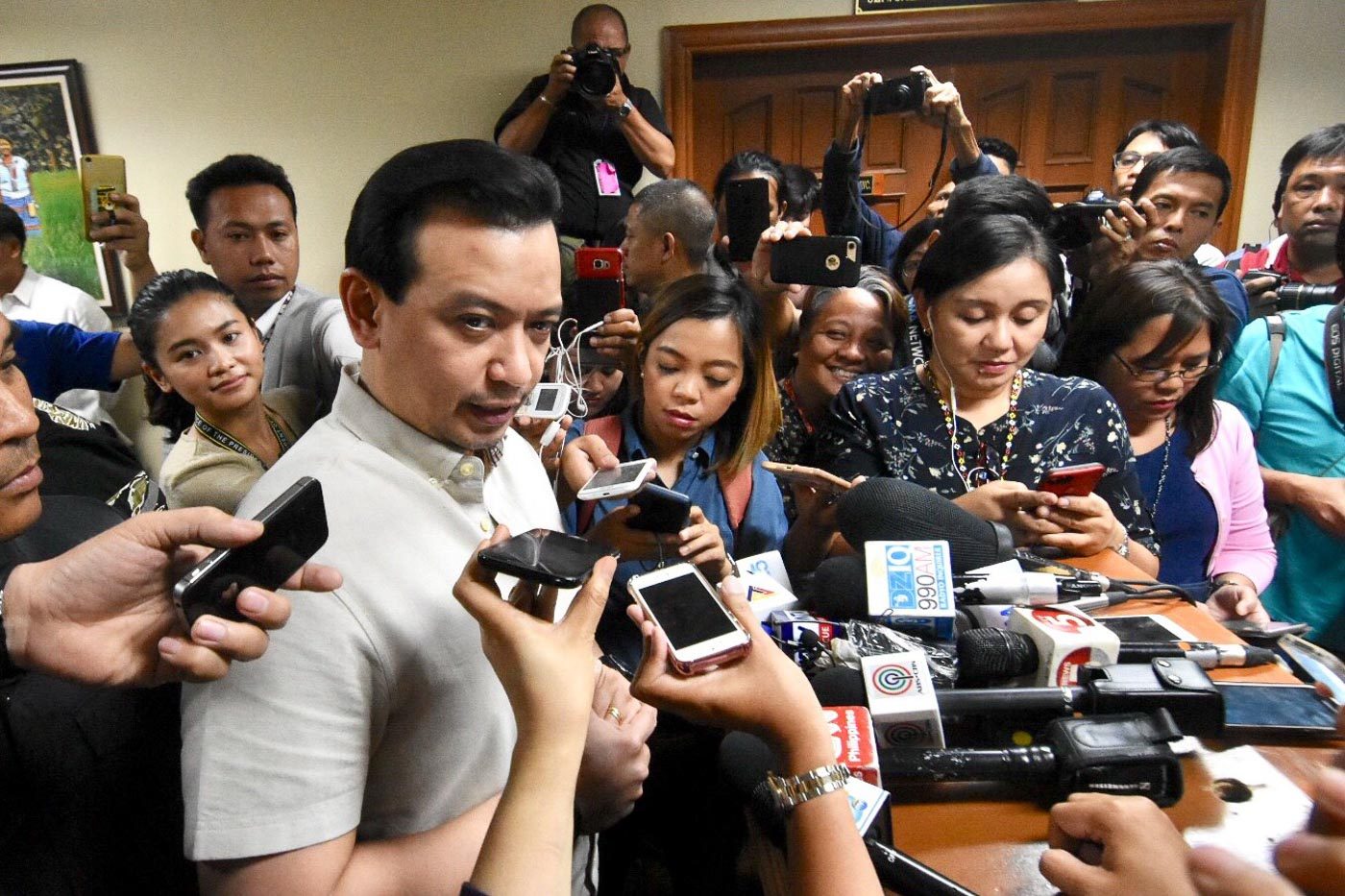 DAVAO CITY, Philippines – A Davao City judge on Friday, December 7, issued a warrant of arrest against Senator Antonio Trillanes IV over the criminal case of libel filed against him by presidential son and former Davao City vice mayor Paolo Duterte.

In a one-page order, Judge Melinda Alconcel Dayanghirang of the Regiona Trial Court Branch 54 ordered law enforcement agencies, particularly the police’s Criminal Detection and Investigation Group (CIDG), to “bring said accused before me to dealt with according to law.” Dayanghirang, however, allowed Trillanes to post bail.Dayanghirang said Trillanes should be presented to her “within 10 days upon receipt” of the arrest warrant copy.

She prescribed P24,000 as bail bond, which the Senator can deposit to any office of the Bureau of Internal Revenue or municipal and city treasurers office, and furnish her with the certificate of deposit “written as undertaking.”

In case of arrest, Trillanes can also post bail in any court upon the approval of the judge who has jurisdiction over the area he would be held in.

On his Facebook page, Paolo was obviously elated at the arrest warrant against Trillanes.

“I’m okay with this. Merry Christmas,” he wrote, as he also uploaded a copy of the warrant.

In September, Paolo filed the criminal complaint for libel against Trillanes with the Davao City prosecutor’s office after his father, President Duterte, voided the senator’s amnesty.

He accused Trillanes of making “false, baseless, and unfounded” claims that he and his brother-in-law, Manases Carpio, demanded money from ride sharing companies, particularly Uber.

In his complaint, Paolo said that, in a teleradio interview over DYAB Cebu on September 8, 2017, Trillanes had claimed he and Carpio connived with Region VII Land Transportation Franchising and Regulatory Board Regional Director Ahmed Cuison to extort from Uber.

He attached a transcript of that radio interview in his complaint.

“Respondent’s teleradio accusations and black propaganda against me and Atty Carpio are pregnant with malice aforethought and evil intent,” Duterte said in his complaint, adding that friends in Cebu called his attention to the false allegations.

“Watching it, I was aghast to hear the respondent maliciously accusing me and my brother-in-law of supposed rampant and widespread corruption and extortion,” Paolo said, adding that the accusations were based on information reportedly fed to Trillanes by a source whom the senator did not identify.

“Worse, respondent had also defamed and labeled me and Atty. Carpio of corruption and extortion not only against Uber and the “other companies” but also in the Road Board and in DPWH as part of supposed corrupt tentacles and shakedown,” Paolo said.

After filing the case, Paolo said Carpio was also filing a separate complaint from the said interview.

The criminal complaint for libel was the latest that Paolo filed against Trillanes.

In December 2017, he and Carpio also sued Trillanes for civil case of libel with damages over the latter’s claim that they were involved in extortion against Uber.

Paolo had said Trillanes had been maligning him, accusing him of such things as involvement in the illegal drugs trade and smuggling. – Rappler.com