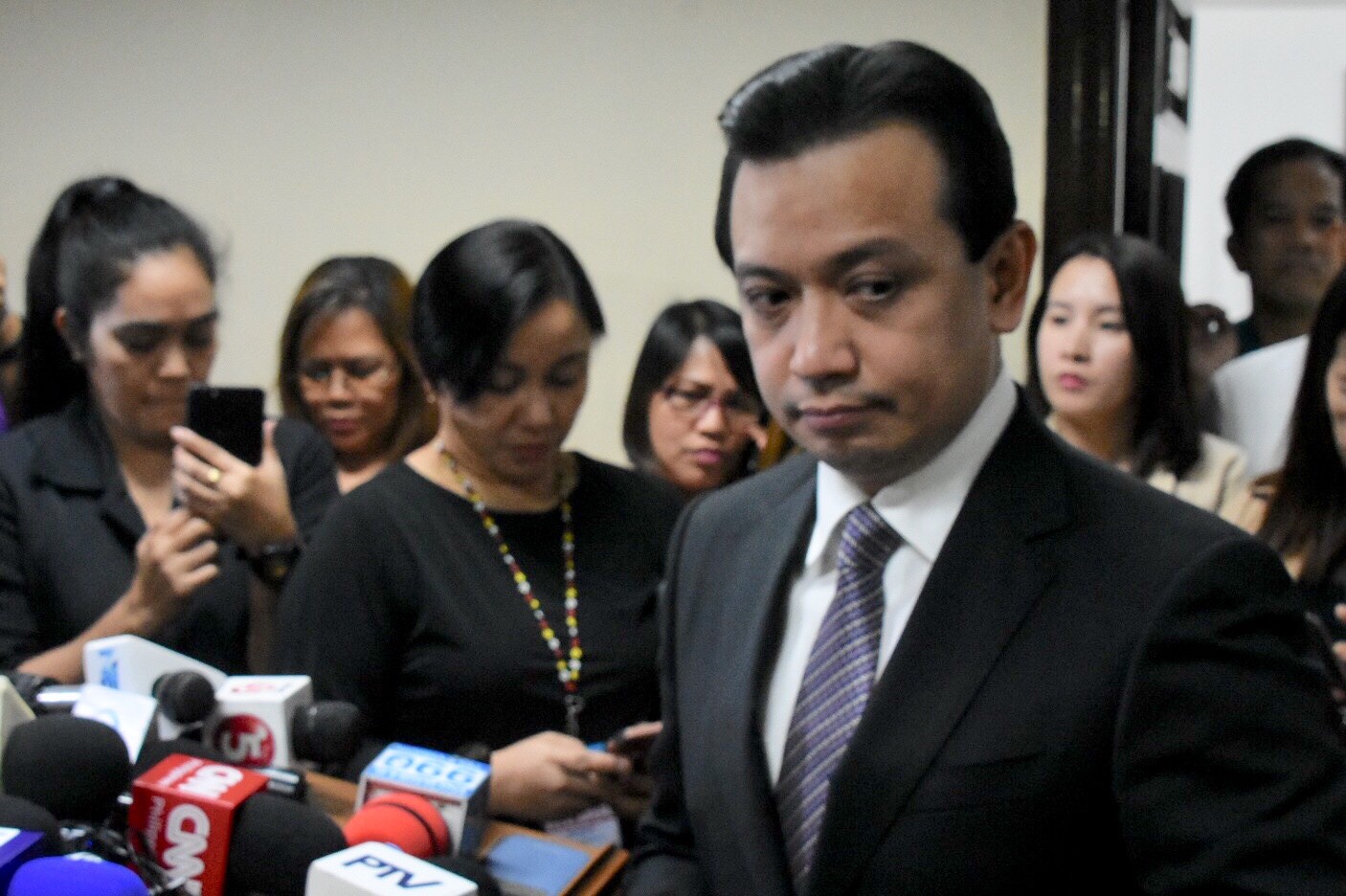 DAVAO CITY – Not just one but four.

It was earlier reported that Dayanghirang issued one arrest warrant against Trillanes on Friday, over a libel complaint of Paolo, but she issued 3 more that day.

In all 4 warrants, Dayanghirang ordered law enforcement agencies, particularly the Philippine National Police Criminal Detection and Investigation Group (CIDG), to “bring said accused before me to be dealt with according to law.”

Dayanghirang said Trillanes should be presented to her “within 10 days upon receipt” of the arrest warrants’ copies.

Dayanghirang prescribed a P24,000-bail bond for each case, which the senator can deposit to any office of the Bureau of Internal Revenue or municipal and city treasurers office, and furnish her with the certificate of deposit “written as undertaking.”

In case of arrest, Trillanes can also post bail in any court upon the approval of the judge, who has jurisdiction over the area he would be held in.

On his Facebook page, Paolo deemed the judge’s orders as an early holiday gift.

“I’m okay with this. Merry Christmas,” he wrote in a post where he also uploaded a copy of the warrant.

Carpio has not made any statement so far.

In September, Paolo and Carpio filed separate libel complaints against Trillanes before the Davao City prosecutor’s office after his father, President Rodrigo Duterte, sought to void the senator’s amnesty granted to him during the previous administration.

They accused Trillanes of making “false, baseless, and unfounded” claims that they demanded money from ride-sharing companies, particularly Uber.

Their complaints were based on a teleradio interview over DYAB Cebu on September 8, 2017, where Trillanes had claimed that Paolo and Carpio connived with Region 7 Land Transportation Franchising and Regulatory Board Regional Director Ahmed Cuison to extort money from Uber.

They attached a transcript of the radio interview in their complaint.

Later in September, the two filed more libel complaints  against Trillanes for allegedly maligning them in public, such as accusing them of involvement in the illegal drugs trade and smuggling.

Trillanes on Friday slammed the issuance of the arrest warrant as reflective of the “topsy-turvy” justice under the Duterte administration, where critics are jailed or under threat of jail, while “plunderers” go free. (READ: Trillanes on arrest warrant: ‘Baliktad ang hustisya sa gobyerno ni Duterte)

Faced with the first court order on Friday, Trillanes said he did not expect to  get arrested over the weekend based on a Department of Justice circular. He also cited what the Constitution says about arrests of lawmakers while Congress is in session.

He said that based on the circular, “the service of warrants of arrests for minor cases like libel on Fridays, weekends, and holidays is prohibited per existing DOJ circular and that under Article VI, Section 11 of the Constitution, as a member of Congress, I am privileged from being arrested in cases punishable by less than 6 years imprisonment while Congress is in session.”

Trillanes had said that he would post bail on Monday, December 11. – Rappler.com