Despite Sandiganbayan justice’s flip-flop, still no bail for Gigi Reyes 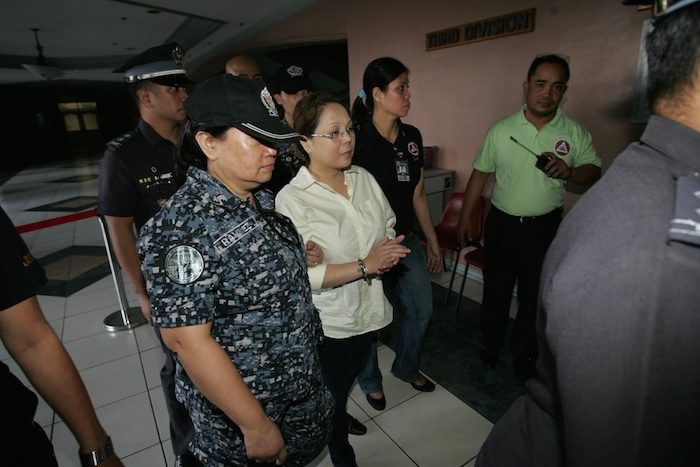 MANILA, Philippines – The anti-graft court Sandiganbayan Special Third Division denied the appeal for bail of Gigi Reyes, the former chief of staff of ex-senator Juan Ponce Enrile, who has been detained for over 4 years over her and her boss’ plunder case in the pork barrel scam.

“In view of the foregoing, this Court finds the evidence against accused-movant Reyes to be strong,” said the Special Third Division in a resolution promulgated on December 7, a copy of which was released to media on Tuesday, December 11.

The majority of 4 justices gave weight to the testimony of witnesses, especially state witness Ruby Tuason who had confessed to brokering the deal between Reyes and Janet Lim Napoles so that the scam could earn Enrile kickbacks worth P172.8 million from 2006 to 2009.

Tuason said she had personally delivered the Enrile kickbacks to Reyes herself.

How the justices voted

On June 28 this year, the regular third division, which is composed of 3 members, voted unanimously to deny Reyes bail. The denial was written by Bernelito Fernandez.

In that resolution, Bernelito Fernandez wrote that the whistle-blowers’ testimonies “remain trustworthy.” It was concurred in by the two other regular members – Presiding Justice Amparo Cabotaje-Tang and Sarah Jane Fernandez.

Reyes appealed the denial. This is where Bernelito Fernandez did a turnaround.

He issued a dissent which forced the creation of a special division of 5. In the Sandiganbayan, votes have to be unanimous among the 3 regular members to promulgate a decision. In case of a dissent, it chooses two special members via drawing of lots.

This is what happened with Jinggoy Estrada’s bail grant and Bong Revilla’s acquittal, which they both won via a majority vote.

In his dissenting opinion, Bernelito Fernandez said that the “testimony of prosecution witness Tucson contains fatal inconsistencies,” which is a flip-flop from his earlier ponencia 6 months before.

Part of the reason why the majority of 4 denied bail is that the defense team was unable to present new evidence in its appeal. The majority of 4 also said they are following an earlier Supreme Court ruling that denied Napoles bail in the Enrile case.

The decision revealed that when Bernelito Fernandez wrote the first denial in June, he had been with the division for less than two years only. He was appointed to the anti-graft court October 2016 by President Rodrigo Duterte.

“Justice (Bernelito) Fernandez needed more time to go over the 17 volumes of case records which consist of more than a substantial number of documentary exhibits and heavy volume of transcript of stenographic notes of the testimonies of the 19 prosecution witnesses,” said the decision in explaining the supposed delay in resolving the petition.

It was also the majority justices who pointed out that the earlier denial was studied well – by the justice who turned around in his vote.

The Enrile plunder case has been stuck at the pre-trial level for years, but it was finally set for trial proper starting February 19, 2019. – Rappler.com