Arroyo: Others got bigger allocations in 2019 budget 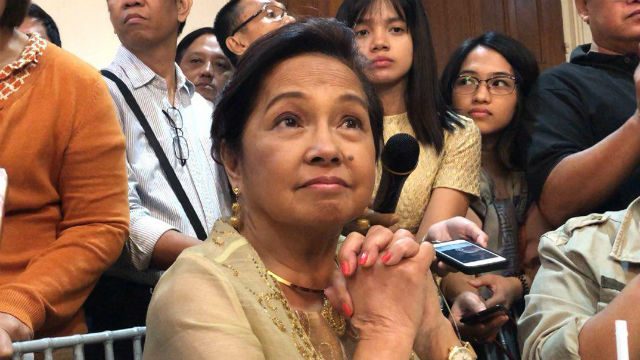 Facebook Twitter Copy URL
Copied
'I’m only upper middle class as far as the allocations are concerned,' says Speaker Gloria Arroyo on the pork barrel accusations against her

MANILA, Philippines – Speaker Gloria Macapagal Arroyo on Tuesday, December 11, asked why she was being singled out for the multi-billion peso allocation of her district in the House-approved 2019 national budget when there were as much as nearly a hundred other lawmakers who got much bigger allocations.

The Pampanga 2nd District representative raised the question in a media interview with reporters on Tuesday, when she was asked if she felt that she was being unfairly criticized and singled out, after Senator Panfilo Lacson revealed that Arroyo’s district has P2.4 billion worth of allocations under the Department of Public Works and Highways (DPWH) for 2019.

Reponding to the question, Arroyo said: “Yes, yes, yes.… Why should I deprive the people of my district? I’m only upper middle class as far as the allocations are concerned!”

Arroyo denied that she got the highest allocations among all lawmakers and slammed Lacson’s accusation that her close allies from Bohol, Surigao, and other parts of the Visayas and Mindanao received huge allocations for public works projects in their respective districts.

“The important thing is that the two allegations I wanted to check – that I cornered it? No, no. There were 60 to 90 more who got bigger than my district. Second allegation, they were my allies? No, no,” said Arroyo.

“If I’m number 90 or number 60 and I’m the Speaker of the House, I have to explain that?” she added. (READ: Arroyo allies got ‘pork’? But 2019 budget prepared during Alvarez time – Andaya)

Arroyo also noted that “the previous leadership of the House have…multiples of the budget of my district.”

Lacson had also said that district in Camarines Sur, which was originally allotted P360.4 million under the National Expenditure Program (NEP) – the proposed budget as presented by the Department of Budget and Management (DBM) to Congress – now has P1.9 billion by final reading. House Majority Leader Rolando Andaya Jr represents the 1st District of Camarines Sur.

Andaya previously admitted that each congressman received P60 million under the 2019 budget to fund their pet projects, while senators got P200 million each. He insisted this is not a form of the now-unconstitutional Priority Development Assistance Fund, as it does not involve the post-enactment phase of the budget process.

In a press conference last week, Andaya also said 99 other legislators supposedly got higher allocations than Arroyo in the 2019 budget.

The House conducted a question hour for DBM Secretary Benjamin Diokno during the session at 3 pm to quiz him about controversies surrounding the 2019 budget.

Past House leaders got higher funds

Andaya wrote this information in a letter to be sent to President Rodrigo Duterte. (READ: Fariñas, Alvarez deny ‘parking’ money for lawmakers in 2019 budget)

“Close scrutiny of the 2019 budget during House deliberation showed huge funding spikes in other favored districts, the provenance of which leadership of the Department of Public Works and Highways has reportedly known nothing about,” Andaya said in the letter.

He said the National Economic and Development Authority also noted that the huge allocations were not recommended by the Regional Development Councils.

Alvarez told Rappler that he “honestly” did not know the total allocations for his district. Alvarez was ousted as Speaker on July 23, before the House began its budget hearings for 2019.

“I don’t know with him (Andaya). I have not attended a single budget hearing. I have not even seen the NEP,” said Alvarez.

Like Alvarez, Fariñas said he did not know the full amount of funds given for his district following the coup that ousted both him and Alvarez from leadership positions in the House.

“I don’t know the allocation for my district but everything listed therein was in the NEP submitted by the President. I left the majority two days after the SONA when I joined the minority, and there is no way I could have added anything to it,” said Fariñas.

“But I will not be surprised if the amount is accurate since my district has one of the longest national highways in the country from Laoag to the boundary of Cagayan province,” he added.

Still, Fariñas maintains the DPWH allocations for his district are not pork barrel funds

“No way ,since, like I already stated, any and all items listed for my district are in the NEP that was made and submitted by the Executive Department to the HOR on or during the SONA (State of the Nation Address),” said Fariñas.

Rappler already sought Nograles for comment, but he had yet to reply as of posting. – Rappler.com