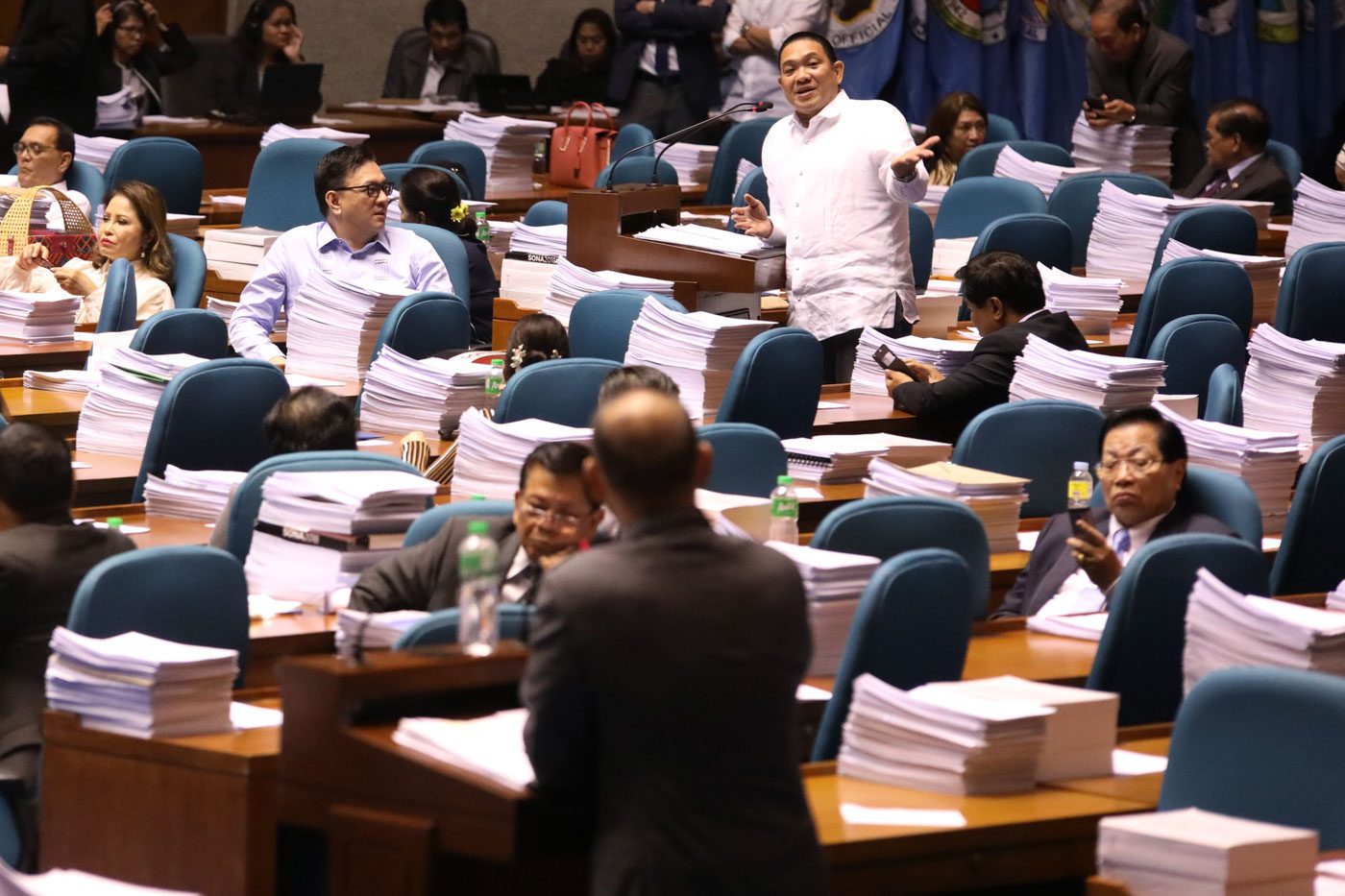 Facebook Twitter Copy URL
Copied
DBM Secretary Benjamin Diokno argues the P75 billion is aboveboard, as its addition to the DPWH funds in 2019 is part of the legal budgeting process

Andaya was interpellating the Department of Budget and Management (DBM) secretary during the question hour in the House Tuesday evening, December 11.

Andaya brought up the issue of the P51 billion that the House leadership previously discovered to have been “misplaced” in several districts’ allocations under the Department of Public Works and Highways (DPWH).

Legislators who requested anonymity said these funds were “parked” across different districts. These were allegedly meant to benefit favored lawmakers under the previous leadership of ousted speaker Pantaleon Alvarez – a charge he already denied.

According to Andaya, DPWH Secretary Mark Villar himself was not aware that the P51 billion was added to his department’s budget in 2019. The Majority Leader said he also spoke to President Rodrigo Duterte himself, who supposedly also does not know where the P51 billion came from.

Andaya concluded the “insertion” likely came from the DBM.

“He (Villar) asked for P488 billion. You gave him a ceiling of P488 billion, and lo and behold, there is an additional P51 billion which no one now claims. So if public works didn’t ask for it and DBM submitted that ‘presidential’ budget to us, then it may only have come from you!” Andaya told Diokno.

Diokno admitted that the DBM had indeed added more to the DPWH budget – a whopping P75 billion. But he insisted the money should not be called an “insertion,” a word often associated with the now-unconstitutional pork barrel funds for lawmakers. (READ: Arroyo: Others got bigger allocations in 2019 budget)

Rather, he said, the additional P75 billion was aboveboard as it was part of the budgeting process.

“Now because we want the infra budget to be higher and to have fiscal space, we decided to augment or to add to the P480 billion another P75 billion, not P51 billion, for a total of P555 billion. You cannot call that insertion because it’s part of the process,” he added.

“So in this whole teté-a-teté that we’re having, it’s clear now that there’s no P51 billion, but P75 billion.  Thank you very much for admitting it – P75 billion in which public works doesn’t have an idea where it came from. All right, I think your silence is a yes,” he said.

It was a heated face-off between past and current budget chiefs. Andaya was DBM secretary when Speaker Gloria Macapagal Arroyo was president. As for Diokno, he was budget chief during the Estrada administration before he was appointed to the same position by Duterte.

There were moments during the interpellation when Andaya’s and Diokno’s words could no longer be heard, as both men spoke loudly over their microphones at the same time.

They dabbled on technical aspects of the budgeting process – from the effects of the looming reenacted budget for 2019, to the issue of who has ultimate control over government savings.

It was clear, however, that Diokno was in Andaya’s turf. The House Majority Leader spent a good amount of time during the interpellation with his left arm casually leaning on the podium, an amused look on his face as Diokno struggled to complete his sentences.

Diokno, meanwhile, was visibly frustrated every time Andaya interrupted him as he tried to answer.

On Tuesday, Andaya also revealed that a certain contractor from Bulacan – C.T. Leoncio Construction and Trading – had allegedly bagged billions’ worth of projects in the National Capital Region, Davao City, and 8 other provinces since 2017.

C.T. Leoncio Construction supposedly also has ties with Cabinet members of Duterte. House Minority Leader Danilo Suarez tried to establish Diokno’s connection to the firm, but the latter said he had nothing to do with it. (READ: Diokno denies conflict of interest over infra projects in Casiguran, Sorsogon)

The House already issued a subpoena against C.T. Leoncio Construction’s owner so the controversial projects could be investigated by lawmakers. – Rappler.com