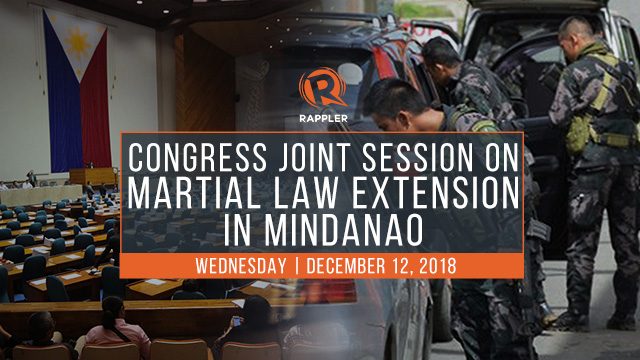 Bookmark to watch at 9 AM

MANILA, Philippines – The Senate and the House of Representatives will convene in a joint session on Wednesday, December 12, to discuss President Rodrigo Duterte’s request for yet another year-long extension of martial law in Mindanao.

The 12-month extension Congress earlier granted Duterte expires on December 31 this year. Prior to this, there was a 5-month request following the 60-day declaration.

Duterte first declared martial law in Mindanao on May 23, 2017 through Proclamation Number 216 after government troops clashed with homegrown terrorists from the Maute Group and Abu Sayyaf Group in Marawi City.

The 1987 Constitution allows the President to declare martial law for a maximum of 60 days only or until July 22 in this case. Any extension would require approval from both houses of Congress.

With the goal of “total eradication” of Islamic State-inspired terror groups in Mindanao, the President has asked Congress to extend martial law in the region by one year – twice already. – Rappler.com