MANILA, Philippines – That 2018 came to a close with martial law extended once more in Mindanao surprised a few. There have been no indications that a Congress dominated by administration allies would deny the request of President Rodrigo Duterte.

Every time the government sought an extension, it provided the same justification.

Duterte first proclaimed martial law in Mindanao on May 23, 2017 – all the way from Russia  where he attended the Asia-Pacific Economic Cooperation Summit, after local terrorists linked to the Islamic State (ISIS) attacked Marawi City.

The 60-day limit to military rule would later prove too short as fighting still raged and Duterte requested for an extension until the end of 2017. Congress granted it in July 2017.

Duterte sought a second extension – one year, this time, or for the whole of 2018 – and he got the nod of Congress. The President then said it was needed to “primarily ensure total eradication” of several terrorist groups, “communist terrorists and their coddlers, supporters, and financiers.” Weeks before martial law was to lapse on December 31, 2018, Duterte requested a third extension and Congress again approved it. The President and his security officials said it was still needed as “terrorism and insurgency still lurk in Mindanao.”

Last Wednesday, December 12, a total of 235 members of the House of Representatives and  the Senate voted to extend martial rule in Mindanao up to end of 2019. Only 26 lawmakers voted against it, while one abstained.

Is martial law truly necessary? The Constitution says it should only be a last resort.

What has military rule in Duterte’s homeland accomplished so far?

But military historian Jose Custodio doused cold water on these claims, warning that the  consequences of extended military rule could be far reaching. Soldiers may once again grow accustomed to governing, like what they used to in the dark years of the Marcos dictatorship, according to Custodio.

Using secondary data, Galvez trumpeted Mindanao’s region’s gains in economy and tourism, as well as the increase in the number of surrendered rebels. These gains were fueled by martial law, he said.

In a press conference in November, Galvez said “peace in Mindanao has never been closer than in the times that martial law is in place.” Galvez’s claims cover only parts of Mindanao, however, and they were made without context. (READ: No actual rebellion, no data to back martial law extension – lawmakers)

From January to November 2018, Galvez boasted that 11,333 members and supporters of the Communist Party of the Philippines-New People’s Army (CPP-NPA) in Eastern Mindanao surrendered to government.

He did not highlight the fact that bulk of those were not armed fighters but supposed underground members and mass supporters – 8,117 of them, according to data from the AFP. The total also includes 1,505 members from “NPA-affiliated groups” such as Milisyang Bayan and Sangay ng Partido sa Lokalidad.

“By next year, as the trend is sustained, we can make these terrorists irrelevant,” Galvez added.

Of this number, 424 are from the Abu Sayaff Group, 264 from the Bangsamoro Islamic Freedom Fighters, 111 from Daulah Islamiyah, and 1,636 communist rebels as of December 2018. Madrigal said the figures were based on intelligence reports. 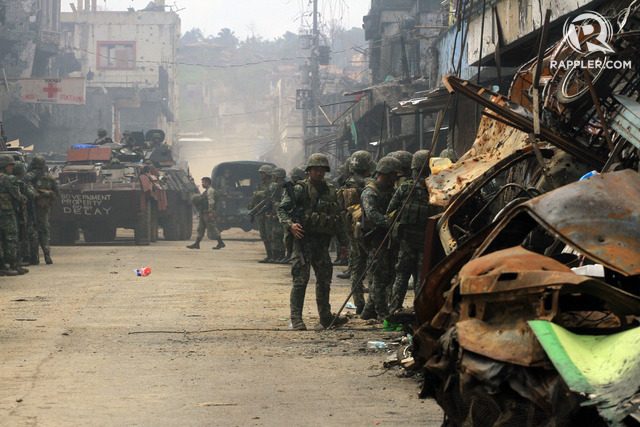 CRISIS IN MARAWI. In August 2017, a Marine Fire Support armored vehicle passes through the Mapandi district as it pulls out from the main battle area in Marawi City. File photo by Bobby Lagsa/Rappler

In terms of economic gains, Galvez cited the Autonomous Region in Muslim Mindanao (ARMM). Its gross domestic product (GDP) supposedly increased from 4.3% to 7.3%, but he did not specify the comparative period.

There was indeed an improvement in ARMM’s economy, but while Galvez counted it as a martial law gain, the PSA attributed it to improved performance of agriculture, hunting, forestry and fishing (AHFF).

The PSA said the AHFF sector – which comprises 56.4% of the ARMM’s GDP – rebounded to 7.7% growth rate in 2017 from the -2.9% growth rate in 2016. Among the factors that contributed to poor performance in 2016 was the low production and harvest of corn, which is a main crop of the region.

For Rappler columnist and economist JC Punongbayan, it is also not possible to pin down the effect of martial law on ARMM’s economic growth. “It might just be because of ARMM’s natural growth catch-up. That is, the region would have grown fast anyway even without martial law.” (Data for 2018 was not yet available.)

On tourism, Galvez said that with the improved security situation, more tourists ventured into areas such as Tawi-Tawi, Basilan, and Sulu in 2017 and 2018.

These were consistent with the numbers cited by the ARMM’s Department of Tourism as Tawi-Tawi provincial tourism officer Mobin Gampal said tourist arrivals increased 3 times over with an average of 3,000 toursit arrivals recorded per month in 2017 compared to 1,000 in 2016.

But the upsurge in tourists may not be a success wholly attributed to military rule.

Tawi-Tawi – the most peaceful of the Muslim provinces in Western Mindanao – has seen a steady increase in number of tourists in the last few years as its local government and the ARMM invested over P3 billion worth of projects in the province, including tourism infrastructure since 2012. One tourism project, for instance, was to develop tourist site Bud Bongao into an Eco-Tourism Park. The project had been provided a budget of about P56 million, according to the ARMM-DOT.

Yet, all these gains, Galvez said, “could not be sustained” without martial law.

He said the gains cited by the military could have been attained without the imposition of martial law – a point raised by some lawmakers opposed to the martial law extension. Such achievements also could have been the result of previous practices of local governments already in place prior to military rule.

“At the end of the day, after one year of martial law, what does it establish? Nothing really in terms of even delivering the basic necessities. So it’s as if you put a layer of martial law over the area,” Custodio said in an interview with Rappler. He also noted that over a year since the war in Marawi ended, government forces were still runing after various armed groups while Marawi remained in tatters.

“The Maute has not thoroughly been beaten. In fact, it’s still there and there’s still a danger of it reviving. Marawi has not yet been rehabilitated after a year. Martial law is supposed to expedite those things but no, it’s not even [doing that]. They’re mired in one controversy after another. The NPA is also up and running in Eastern Mindanao…. So what has it really accomplished?” Custodio said.

One glaring gap in the implementation of martial law was its failure to expedite the rehabilitation of Marawi City, which the military had promised. (READ: Road to Marawi rehab: What caused months of delay?)

Reconstruction efforts have been mired in controversy and plagued by delays after the Task Force Bangon Mawari’s initial plan to have the Chinese-led Bangon Marawi Consortium did not push through following the group’s disqualification. This led some Mindanao lawmakers to hit the rehabilitatioon process as “painstakingly slow.“

And after at least 4 delays, grounbreaking for rehabiltiation efforts in the war-torn city only took place last October 30, over a year since the war ended. In working towards a recommendation for a third martial law extension, security officials also sought to bolster their claims that Mindanao residents favored the move and gathered reviews from local officials.

Two governors and 8 mayors were listed as in favor of extending military rule in Mindanao, according to the AFP, which based this on news reports and public statements.

Leaders like Compostela Valley Governor Jayvee Uy said the implementation of martial law was “a step in the right direction.” Meanwhile, several lawmakers also said they were not aware of any abuses since the start of its implementation.

During the joint session on the request for another extension of martial law, Senator Francis Escudero said that under the Constitution, maintaining peace order and improving the economy are not valid reasons to impose martial law.

“What are mentioned are invasion or rebellion only – not for maintaining peace and order, not to improve the economy or not because this is what the people want,” said Escudero, one of 5 senators who voted against the extension. ANTI-MARTIAL LAW. Some Mindanaoans troop to the House of Representatives on December 12, 2018, to protest as Congress holds a joint session on the extension of martial law. Photo by Darren Langit/Rappler

During the past year, it was also hard to ignore Mindanao residents who claimed human rights violations were committed by the military.

Leaders of indigenous tribes, labor groups, and evacuees said martial law had led to more instances wherein residents were either forced to leave their homes or could not return to hometowns due to intense military operations. (READ: Marawi resident makes emotional plea vs martial law abuses)

However, these have never been addressed in detail. The police and military also insisted that there were no violations.

Former Bayan Muna representative Teddy Casiño, in a previous interview with Rappler, rejected this and said security officials failed to listen to the sentiments of residents themselves.

(Martial law is not a popularity contest. Peace and order is supposedly better because of martial law, but they (local officials) will always say martial law is okay. In such a situation, who should we listen to? The ones affected.)

Custodio said the peace and order and economic problems cited by the administration as being addressed by martial law have been there for decades – and will likely remain for many years, given Mindanao’s seemingly intractable problems.

“It’s always going to be there. Alam naman nila (They know) what are the tools to defeat this – it’s development. It’s a little bit of security and a lot of development and aid,” he said. 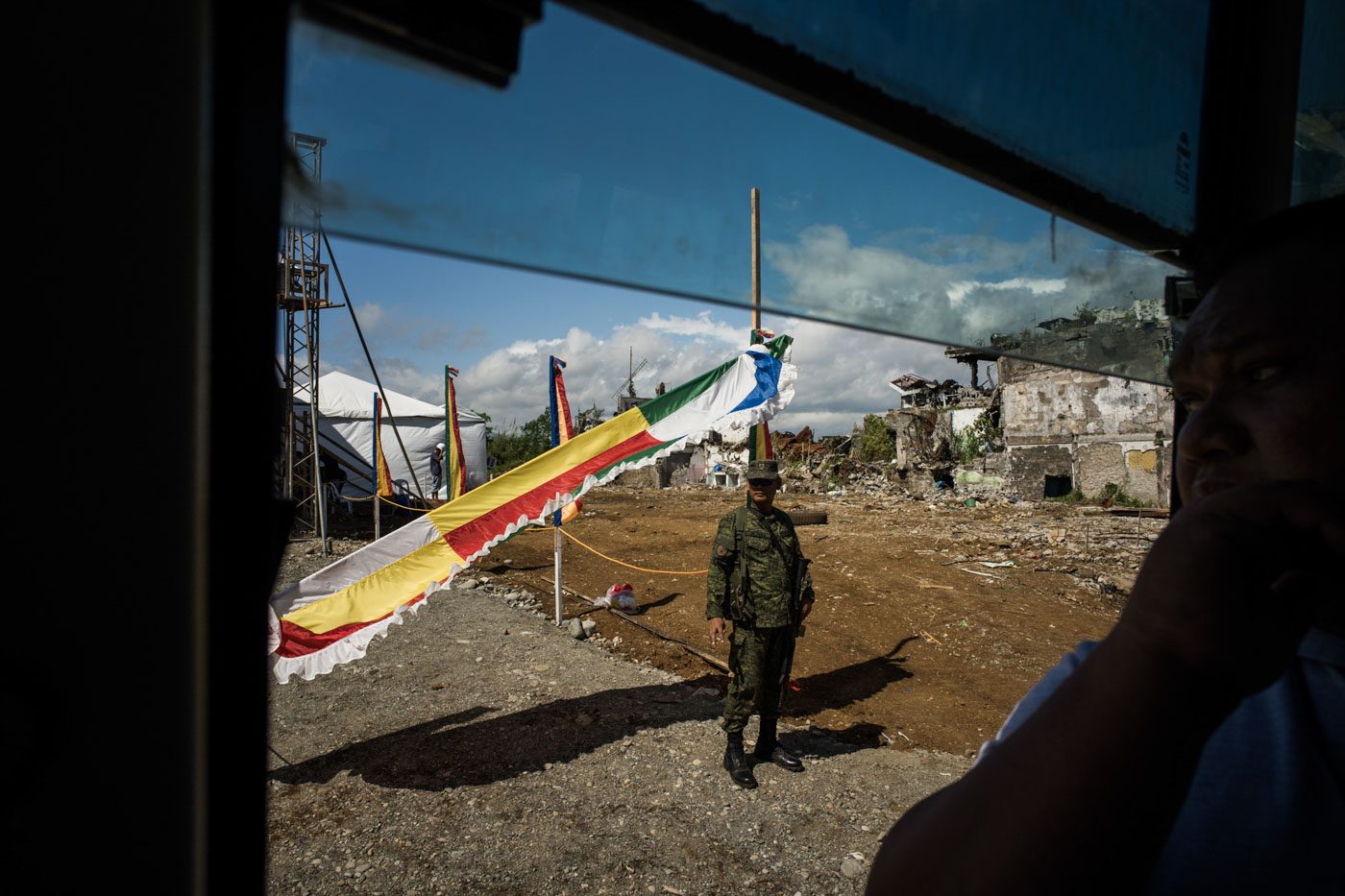 REBUILD MARAWI. A soldier stands in Marawi City as the ground breaking ceremony for the rehabilitation and rebuilding of the city’s most sffected area finally pushed through on October 30, 2018. Photo by Martin San Diego/Rappler

All this for what?

If results from over a year of military rule are mixed at best, what could be expected after another year-long extension?

Custodio warned it could be public mind-conditioning for prolonged military rule in Mindanao or even nationwide martial law.

The willingness of security officials to push for an extended military rule, Custodio said, also showed they could be forgetting reforms that took decades to put in place after Martial Law under the late strongman Ferdinand Marcos,

“They are unlearning everything that they were being taught in the 1980s up to the current period which is reforms, sectoral reform – kinakalimutan nila (they are forgetting). That is what Duterte is doing, he is slowly the undermining the AFP institution as a professional organization,” he said. (READ: In 2018, Duterte turns to military for (almost) everything) – Rappler.com