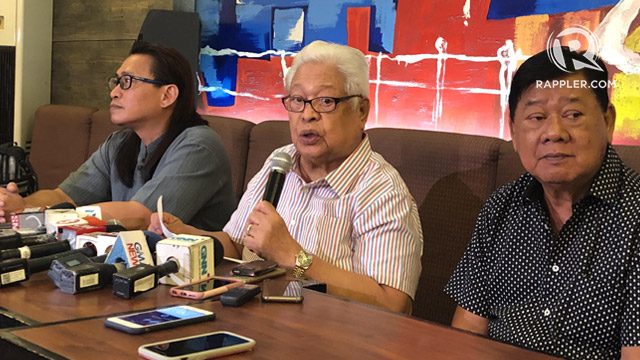 MANILA, Philippines – Opposition congressman Edcel Lagman believes Budget Secretary Benjamin Diokno could not have “inserted” P75 billion into the proposed 2019 budget without the consent of President Rodrigo Duterte himself.

The Albay 1st District representative was asked by reporters on Thursday, December 13, if he feels that the House’s accusation against Diokno is part of a ploy to distract the public from the alleged pork barrel in the proposed P3.757-trillion budget for 2019.

The House had claimed that Diokno used his influence for billions of pesos worth of projects in Sorsogon, an allegation that he has denied. Diokno’s daughter is married to the son of Sorsogon Vice Mayor Ester Hamor.

Lagman said it is unfair to say the House is merely distracting the public. Instead, he focused on Diokno’s admission that the Department of Budget and Management (DBM) added P75 billion to the Department of Public Works and Highways (DPWH) funds for 2019.

“If the facts and figures are admitted by no less than Secretary Diokno, then we should be able to rely on his admission that there is a P75-billion additional amount. But I don’t think that Secretary Diokno will do this on his own. I think he has the permission, the consent, and prior knowledge of the executive, more particularly the President,” said Lagman.

But House Majority Leader Rolando Andaya Jr said Duterte supposedly has no idea about the budget insertion. The President has yet to comment on the matter.

“There is no insertion in the budget. That term is a misnomer. Changes during budget preparation are adjustments…. Adjustments happen,” Diokno said in a press briefing on Wednesday, December 12.

Lagman also said there is a “strong possibility” that other government officials are behind the allegations against Diokno.

He pointed out that the National Expenditure Program (NEP) is prepared by agencies in the executive branch, then submitted to Congress for scrutiny. The Congress-approved version of the proposed budget is contained in the General Appropriations Bill, which the President signs into law.

“That is a strong possibility because all of these were in the NEP, and the NEP, as I’ve said, is the product of executive function, and that would include the members of the Cabinet, including the President,” said Lagman.

House Majority Leader Rolando Andaya Jr also believes Diokno and other Cabinet officials are tied to CT Leoncio Construction and Trading, a Bulacan-based contractor that has allegedly cornered billions of pesos worth of projects across various agencies and provinces nationwide since 2017.

In Sorsogon alone, Andaya said CT Leoncio cornered a total of 30 projects in 2018.

The House has already adopted a resolution urging Duterte to fire Diokno.

But Malacañang stands by the budget chief, saying that he remains a “man of integrity.” – Rappler.com