Duterte says he’ll ‘hamlet’ Lumad to keep them from NPA 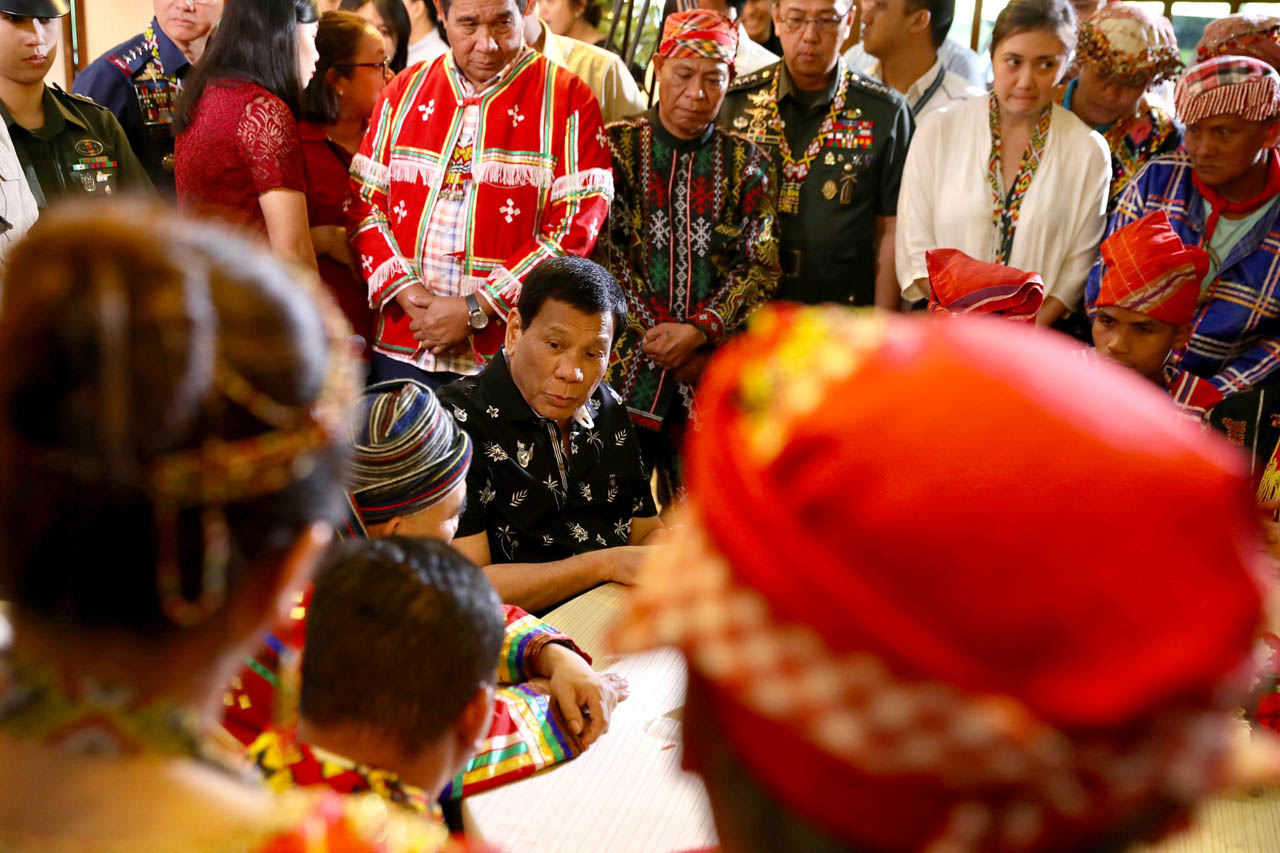 MANILA, Philippines – President Rodrigo Duterte said he will “hamlet” indigenous peoples (IPs) in order to keep them from getting influenced or harmed by communist rebels.

In a speech on Tuesday night, December 18, the President said he would implement the policy “this year.”

“There is a certain point but it will be this year. Ako, para unahan na nako sila para dili na sila mang-imbento (I have to be the one to say this first so that they won’t make up false stories). I will hamlet them. Why? Because if they remain scattered, they are really in danger,” he said.

He was speaking at the Barangay Summit for Good Governance in Davao City. Among the audience were Lumad leaders.

“I cannot get their loyalty if they are scattered because they are afraid to be far from each other,” he continued.

Duterte was not clear if the “hamlets” he envisions would be in ancestral lands granted to IPs, though he said earlier this year that he planned to relocate IPs.

As early as February this year, the President had told Lumad leaders of his plan to move IPs to “temporary shelters” and that he would release P100 million to fund the move. He hinted then that it was part of his counterinsurgency plan. (READ: Duterte tells Lumad leaders to prepare for relocation)

Hamletting is among the human rights violations committed under Ferdinand Marcos’ Martial Law as documented by Task Force Detainees.

On Tuesday, the President said these hamlets will be Lumad territory and that IPs will guard them.

“Now I will hamlet them. You natives won’t be able to say that you’re being imprisoned. But I will make a secure place for you that will be your territory for the meantime. I will be the one to decide whether you’ll be given arms. No one else will be able to enter. You will be the ones who will guard it,” he said in Bisaya.

But the President said he would also order military and police to help guard the hamlets. He appeared to say soldiers and police would be ordered to shoot members of the New People’s Army (NPA) – the armed wing of the Communist Party of the Philippines – who attempt to enter the territory.

“Nobody else can enter. There will be no other tribe. It’s all for you. But if I say that the Matigsalug will be here, don’t – I’ll tell the military and police to operate in your area. Guard the place and if you see them, shoot them right away,” said Duterte.

“If you don’t, he’ll go back and take your gun. Anyway, you don’t need to say the human rights [groups] will be keeping count. Eh natural. As long as he’s carrying a gun or a bolo, ‘Are you an NPA?’ Ah they’ll leave right away. If I were you I’ll say, ‘This was Duterte’s orders,’” continued the President.

He added that hamletting will be done “all throughout the Philippines” and that he will provide Lumads with livelihood opportunities within their hamlets.

“Whichever tribe yours is, Matigsalog, stay there with them. I will be the one who will provide you with a living. But I will also give you a – I’ll give you a tractor,” said Duterte.

He then slammed communists for radicalizing the Lumad and using them for their own purposes.

“How many Lumad, Matigsalug, Ata, Bagobo, everyone. No one is spared including the Manobos in Agusan. They controlled them and gave them firearms. That’s what makes it ugly. They’ll just say they were given firerams,” said Duterte.

In the same speech, Duterte acknowledged the unilateral ceasefire declared by communists but slammed them for a violent incident in Sorsogon.

He then reiterated that it would be “futile” to revive peace talks with the Left. – Rappler.com