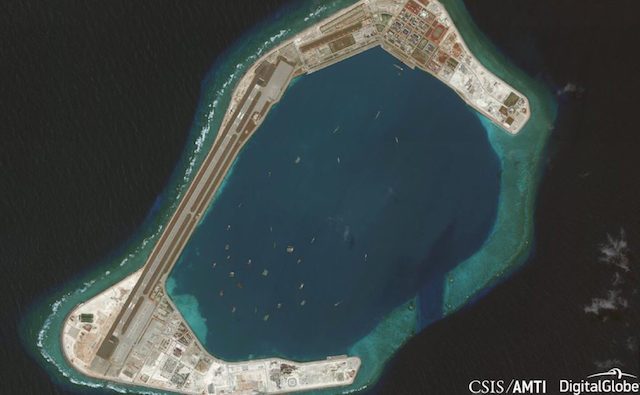 Facebook Twitter Copy URL
Copied
In 2018, China entered a new 'phase' in its militarization of the South China Sea, including the Spratlys in the West Philippine Sea, says AMTI director Gregory Poling

MANILA, Philippines – The year 2018 saw China enter into a new phase in its militarization of artificial islands in the South China Sea – the increased deployment of military vessels and equipment.

This is according to Gregory Poling, director of the Asia Maritime Transparency Initiative (AMTI) of the Center for Strategic and International Studies (CSIS), a think tank based in Washington DC.

AMTI is the group that regularly publishes satellite images of the South China Sea.

Poling made this argument on December 7 at a forum organized by Stratbase and the Albert del Rosario Institute.

“The fact that by the end of last year (2017), we suddenly had effectively operational air and naval bases should be concerning. What should be more concerning is that 2018 has now become phase 3, which is deployments,” he said.

“Over the first 6 months of the year, certainly there was a steady, pretty rapid increase in the level of Chinese military deployments that was well covered in the press here and in Washington,” he continued.

In his presentation, he cited deployments of military planes and missiles to reefs in the Spratly Islands – including Subi Reef (Zamora Reef), Mischief Reef (Panganiban Reef), and Fiery Cross Reef (Kagitingan Reef).

These 3 reefs have been transformed into islands by China through reclamation.

They are located in the Spratly Islands, found in the West Philippine Sea, the part of the South China Sea that is within the Philippines’ exclusive economic zone.

Yet China continues to control them as part of its expansive claim to virtually the entire South China Sea using its “9-dash line.” This 9-dash line was struck as invalid by a 2016 international ruling after Manila took China to court. 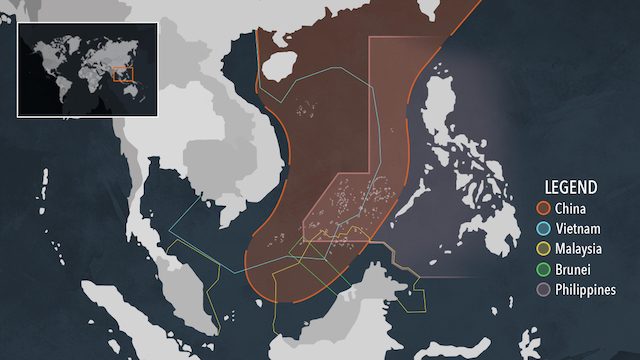 He also mentioned China’s activities in the Paracels, an area in the South China Sea being claimed by Vietnam and China, but not the Philippines.

The 2018 incidents he mentioned are the following:

The year 2018 saw continued portcalls by Chinese naval ships in the Spratlys as well as the presence of Chinese maritime militia vessels in the area.

Photos taken in August, for instance, showed around 200 such paramilitary vessels in Subi Reef. Fifty-one meters in length, they are larger than most law enforcement vessles of Southeast Asian countries.

Poling said it would be a mistake to assume these vessels are only a minor part of the Chinese arsenal.

“We never see any evidence that they are doing anything other than intimidating the neighbors and the reason you see so many at Subi Reef is because they often leave the lagoon and go hang out at the vicinity of Pag-asa (Island) for days, weeks at a time, largely to intimidate Filipino resupply missions,” he said.

Outlook: Fighter jets in the Spratlys?

Poling warned that more is to come.

For instance, while China is yet to deploy fighter jets in West Philippine Sea features it has occupied, there are strong indications it would do so eventually.

A fighter jet has already been spotted in front of a hangar built by China in Woody Island, the largest of the Paracels. China has built similar hangars in the Spratly Islands.

“That hangar is identical to the hangars built in Fiery Cross Reef, on Subi Reef, and on Mischief Reef. China has constructed in total 72 fighter jet hangars in the Spratly islands and it did not build them to leave them empty,” said Poling.

If his prediction comes to pass, China will become the only power with fighter jets in the Spratlys.

The China-built platform near Bombay Reef in the Paracels also does not bode well for the Philippines.

Poling thinks that China is likely to deploy similar platforms in the Spratlys and eventually, even in Panatag (Scarborough) Shoal, the rocky sandbar considered a strategic location for staging military operations and of immense political and economic signficance to the Philippines.

The fact that these platforms can be built quickly, around two weeks for the platform near Bombay Reef, and with relatively little environmental damage, means they will be harder to stave off.

Another red flag for Poling is China’s recent statement that Beijing wants the Code of Conduct on the South China Sea to be completed in 3 years, or within the term of the Philippines as country coordinatior for ASEAN-China relations (ASEAN refers to the Association of Southeast Asian Nations).

The code of conduct is a document expected to lay down rules and protocols to be followed by Southeast Asian countries and China to avoid violent confrontation in the South China Sea.

For Poling, this 3-year deadline is China’s way of buying time so that they can continue to militarize the South China Sea.

“These are the actions of a country who wants to use things like the Code of Conduct to buy time while it establishes de facto dominance over the South China Sea,” said Poling.

“I suspect that in 3 years, if they feel they don’t have dominance they’ll need another 3 and another 3 after that,” he added.

As for Duterte, he has so far given two red lines he will not cross: China building on Panatag (Scarborough) Shoal and China taking oil and gas resources from the West Philippine Sea. Poling thinks China is refraining from building facilities on Panatag Shoal only so that Duterte does not lose face with the Philippine public. This, however, would allow them to continue doing other things in the West Philippine Sea.

“As long as they don’t build on Scarborough or shoot a Philippine soldier, the Duterte government has made clear that they aren’t going to make noise. The Chinese are allowed to do anything they want. That works for China,” Poling told Rappler.

While it remains unclear if Duterte will ever assert the Hague ruling against Beijing, China is ready for a long game.

It could be holding off on building on Panatag Shoal now, but as Poling warned, “They’re not going to hold off forever. The Chinese can wait, they’re in no rush.” – Rappler.com