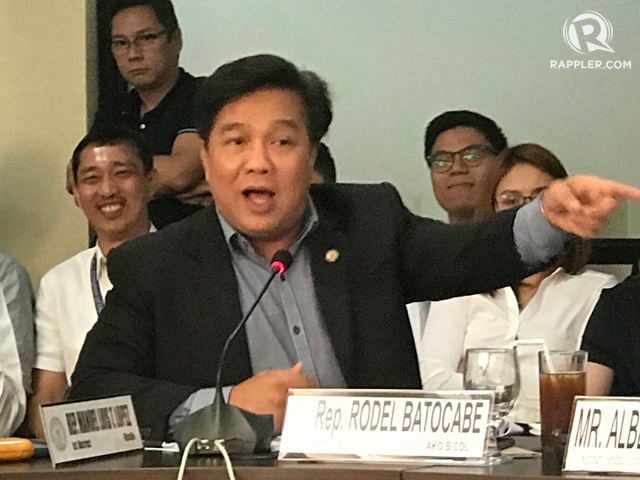 MANILA, Philippines (UPDATED) – AKO BICOL Representative Rodel Batocabe, 52, was shot dead along with his police escort on Saturday, December 22, while in a gift-giving event in Daraga, Albay.

Batocabe was running for mayor of Daraga. He was the first congressman to be killed under the Duterte administration.

The Philippine National Police (PNP) said two gunmen wearing black bonnets shot Batocabe inside the covered court of Barangay Burgos in Daraga, Albay, at around 3 pm, while he was attending a gift-giving event for senior citizens and people with disabilities.

Batocabe and his police escort, SP01 Orlando Diaz, were rushed to AMEC Hospital in Legazpi City, where they were both pronounced dead on arrival, according to Police Senior Inspector Mayvell Barcia-Gonzales, spokesperson of the PNP provincial command.

“Congressman Batocabe suffered 8 gunshot wounds from the unidentified attackers. We are clueless as of the moment on the motive of the killing and the identities of the suspects,” Barcia-Gonzales said.

At least six others were wounded in the attack, Daraga police chief Superintendent Bento Dipad said.

Barangay Burgos, where they were shot, is a far-flung village that is already near Sorsogon province.

The incident is the first known killing of an elected official in Daraga, the PNP said.

At least 7 mayors and 12 mayors have been slain under Duterte’s watch, Rappler’s tally showed. Hours before Batocabe was killed, the former mayor of a Bukidnon town was also murdered.

Batocabe was the vice chairperson of the House committees on dangerous drugs, good government and public accountability, and natural resources.

He is the president of the partylist coalition in the House of Representatives. He used to be part of the majority bloc under former Speaker Pantaleon Alvarez but is now a member of the minority under House Minority Leader Danilo Suarez.

Albay Representative Edcel Lagman expressed outrage over Batocabe’s killing. “His killers and their mastermind must be relentlessly pursued, apprehended, and brought to justice without delay,” Lagman said in a statement.

He added: “Politics must not be stained by the blood of politicians and partisans. It must be confined to the confrontation of ideas and programs in the tranquil fora of mutual respect and civility.” – with reports from Mara Cepeda and Rhaydz Barcia/Rappler.com